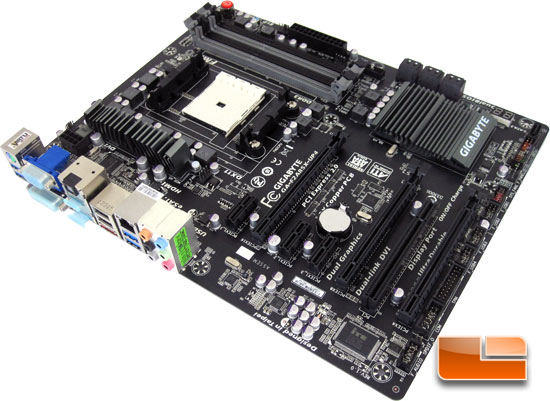 Without a doubt, GIGABYTE is one of the top motherboard computer component companies out there. GIGABYTE has a very extensive array of product ranging from computer mice, cases, cooling, motherboards, graphics cards and more. GIGABYTE didn’t stop at components though, they also have a line of Notebooks, and netbooks. There isn’t much that GIGABYTE doesn’t offer for the industry today. For now though, we are going to focus on the GIGABYTE F2A85X-UP4 AMD Socket FM2 motherboard. The GIGABYTE F2A85X-UP4 is the top FM2 motherboard in GIGABYTE’s FM2 product stack and retails for only $127.06 Shipped.

The GIGABYTE F2A85X-UP4 is loaded with features from the start. To start out the extensive list of features, the GIGABYTE F2A85X-UP4 is built using the latest AMD A85X chipset for the new AMD A-Series ‘Trinity’ APU’s. One of the biggest changes in the A85X chipsets is the addition of two addtional SATA III 6Gbps ports for a total of eight ports, and an additional two SuperSpeed USB 3.0 ports which gives the AMD A85X chipset a total of four SS USB 3.0 ports.

The GIGABYTE F2A85X-UP4 is part of the Ultra durable 5 stack of motherboards. The Ultra Durable 5 technology is a combination of different technologies. For the CPU power delivery it is a combination of high current capable components for the CPU power zone that include IR3550 PowIRstage IC’s, 2X Copper PCB, and 60 Amp high current Ferrite Core Chokes. With these components combined the GIGABYTE F2A85X-UP4 delivers cooler temperatures and higher power efficiency. The GIGABYTE F2A85X-UP4 uses Digital Power via an exclusive Digital PWM controller array. This allows GIGABYTE Ultra Durable 5 motherboards like the F2A85X-UP4 to deliver much more control and precision to the x86 and GPU aspects of the AMD APU. GIGABYTE has also implemented their 3D UEFI BIOS which is a definite step up from the traditional BIOS that we were working with on the previous generation AMD A75 chipset. In addition to the 3D BIOS, the GIGABYTE F2A85X-UP4 is also running dual BIOS chips. If the primary BIOS chip somehow gets corrupted, the secondary BIOS chip will restore it.