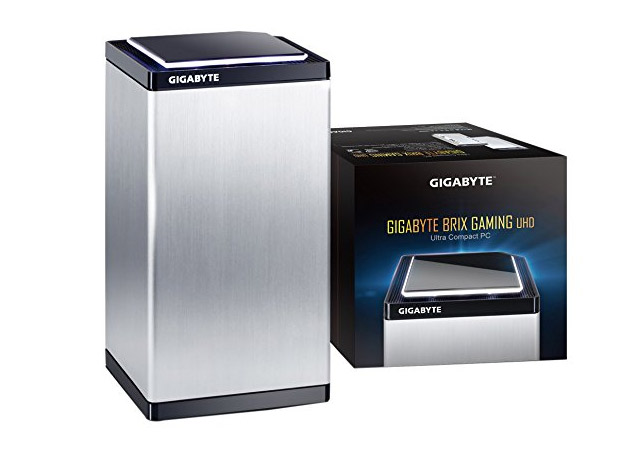 The Gigabyte BRIX Gaming UHD GB-BNi7HG4-950 is a really neat concept that we’ve been excited about since first learning of it nearly 11 months ago at CES 2016 in Las Vegas. Now that we’ve gotten our hands on the final retail version and actually used it on our test bench, we aren’t as impressed as we once were. For starters the Gigabyte Brix Gaming UHD is rather expensive for what you get as our system as it was configured cost just over $1,300.

Sure the system is small, but you can get more powerful desktop gaming PCs at nearly half the price that are fully assembled with Windows 10 already installed. For example the CyberPowerPC Gamer Xtreme VR (our review) is $719.99 and there was even a holiday sale recently that had it paired with an Oculus Rift VR gaming headset for $999 for Amazon Prime members. Knowing that there are deals like that out there make it extremely tough to recommend something like the Brix Gaming UHD to someone primarily  concerned with gaming. Since this system is stuck using the GeForce GTX 950 (GTX 965M) it fails to meet the recommended video card requirement for pretty much any new AAA gaming title coming out. Our gaming benchmarks show that the Brix Gaming UHD can play some of the more recent game titles so long as you are willing to reduce the image quality to get acceptable frame rates for 1080P gaming. For $1,300+ and having to take the time to build a system it really hurts to lower the image quality settings straight away. There might be UHD in the product name, but it struggles with Full HD gaming. Maybe Gigabyte was targeting MOBA gamers (Dota 2, Heroes of the Storm, and Paragon for example), but how many casual gamers are buying $1300+ systems that need to be built for casual games. Too expensive for casual gamers and not enough power for die hard gamers, so where does the Brix Gaming UHD really fit in?

That is before you even talk about the noise level at load, high operating temperatures, possible lack of being able to upgrade the GPU down the road and the software issues that we ran into. We love the small form factor and the idea behind the Brix Gaming UHD, but the performance just isn’t enough at this price. Die hard gamers are going to go with the Intel NUC Skull Canyon (NUC6i7KYK) for $575.00 shipped and use the systems Thunderbolt 3 (40Gbps) port for an external GPU enclosure dock like the Razer Core external graphics dock ($499.99). The temperatures aren’t any better on Skull Canyon, but at least you have an external GPU enclosure that you can use for years to come.

Legit Bottom Line: The Gigabyte Brix Gaming UHD is a solid system, but for a gaming system the performance is a bit lower than we want to see and we sure wish the GPU was easy to upgrade.