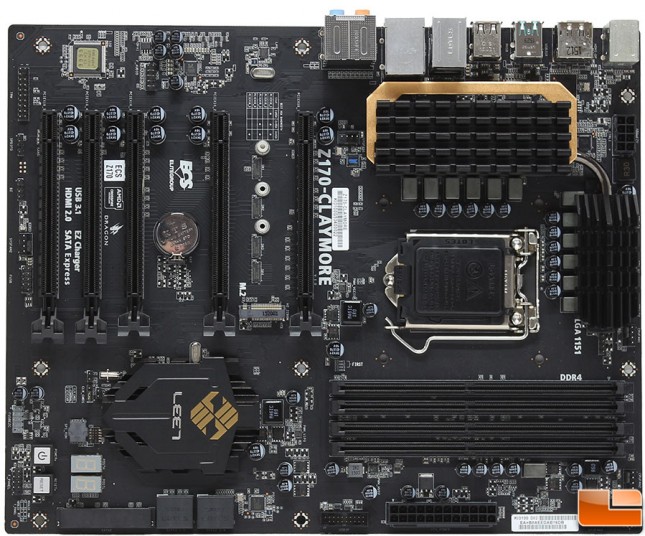 The ECS Z170 Claymore has a fairly relaxed color scheme with the overall color being black, with a couple gold highlights. At first glance, we can see that it follows a fairly standardized ATX layout. There is nothing that we can see at this point which immediately jumps out screaming for attention. 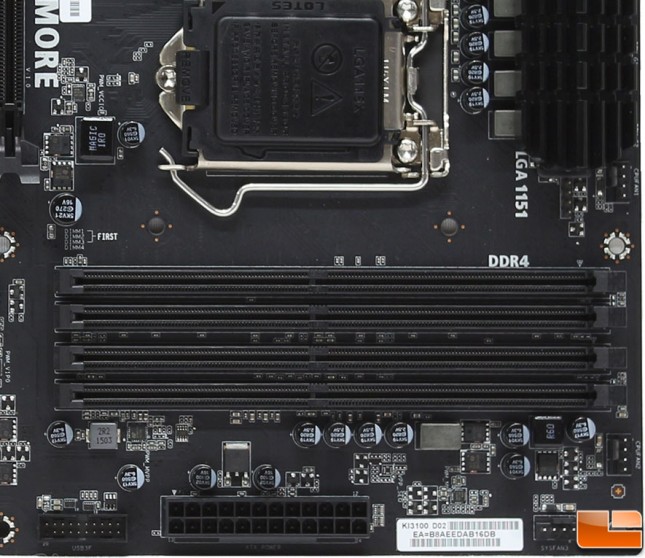 Starting off in the corner with the four DDR4 slots, we find that the slots utilize the one locking clip on one side, and a guide on the other. The four DDR4 slots are capable of supporting up to 3200MHz Dual Channel memory with the 64GB size limitation of the Z170 chipset. To the top left of the first DDR4 slot, ECS has placed a little informational tag, letting you know which memory slots to fill first. Found along the edge of the motherboard is the SuperSpeed USB 3.0 internal header and the standard 24-pin motherboard power connector. In the corner we find two PWM fan headers listed as CPU_FAN2 and SYS_FAN3. CPU_FAN1 can be found along the edge, to the top right of the DDR4 slots, just below the heatsink. 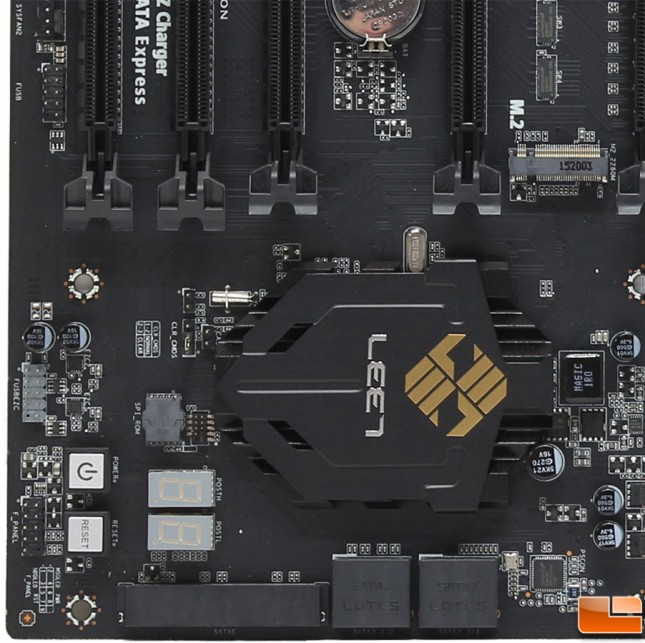 Checking out the bottom left quarter of the motherboard, we find a large “shield” shaped heatsink over the Intel Z170 chipset, of which ECS has placed a more refined shield with the latest LEE7 logo. Of course that’s not all that we find here. Near the Z170 chipset is a split Debug LED that presents common codes for investigating issues. From this viewpoint, the CLR_CMOS jumper is to the upper left of the chipset heatsink; this is important to know if you are doing overclocking, as this is the only way to reset the BIOS. Along the left edge of the motherboard is the familiar front panel header, which ECS has printed a label on the motherboard identifying how to connect the panel connectors. Between the front panel connectors and the Debug LED is the on-board Power and Reset buttons, which will glow Blue when the motherboard is turned on. In this section, there is also a grey USB 2.0 header, which is part of ECS EZ-Charger system which will provide power to the USB ports, even if the system is turned off, and provides a boost of power to certain devices. 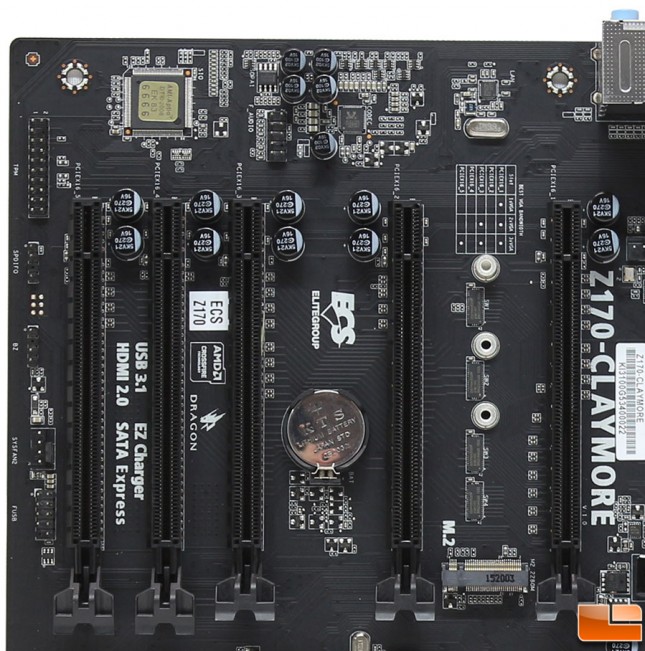 In the upper left section, we find the familiar five PCIe x16 Gen 3 slots, this motherboard will support up to 3-way CrossFireX, however there is no support for NVIDIA SLI. At the end of the M.2 slot is a little printed graph showing the best slots to utilize when installing multiple graphics cards. When running The M.2 slot supports 2242/2260/2280 M.2 SSD’s, it appears to share bandwidth with two of the SATA ports. Along the edge we find various headers that include the TPM, SPDIF, Buzzer, SYS_FAN2 PWM and another USB 2.0 header. If you are wanting to use the front audio connection, this is placed just above the middle PCIe x16 slot. 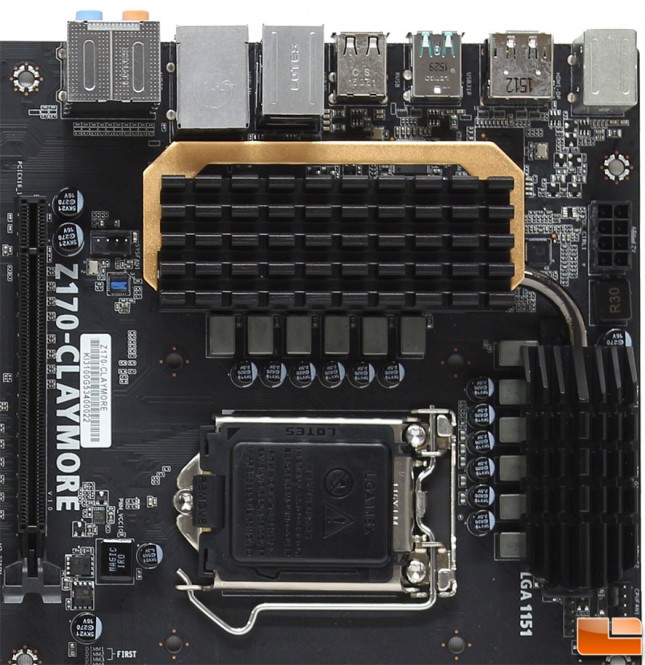 The area around the CPU socket isn’t very exciting. The Intel socket 1151 is protected by the standard cover, protecting the pins. There are two large heatsinks covering the MOSFETS and VRM, which are connected by a heatpipe. Instead of being plain black, ECS has included a piece of gold colored heatsink to add a splash of color and of course provide some additional surface area. The standard 8-pin ATX motherboard power connector is found along the edge, with nothing obstructing it’s use. Just to the left of the top heatsink is the final PWM fan header, listed as SYS_FAN1.

Taking a look at the rear I/O ports, we find that ECS has included separate PS/2 Keyboard/Mouse ports rather than the single combo port. Next is the integrated DisplayPort and HDMI 2.0 connections (to my knowledge, ECS is the only manufacturer implementing HDMI 2.0 at this time). ECS did not include a Type-C connector, instead they provide two USB 3.1 connectors that are controlled by the ASMedia ASM1142. Next a pair of USB 2.0 ports, which are still useful for keyboard/mice. SuperSpeed USB 3.0 is represented with four connectors. Then we have the Realtek DRAGON ethernet connector along with two more USB 2.0 ports; these are grey and designed to charge USB devices even if the PC is not powered up. Finally the audio cluster, which includes an input, 4 output and a microphone 3.5mm connectors, there is no SPDIF connection.