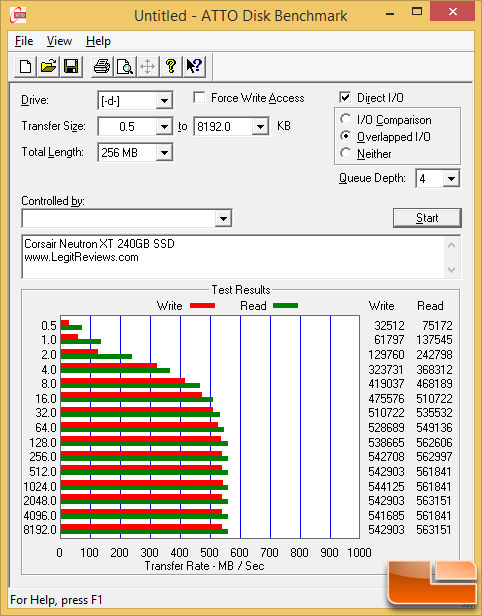 Benchmark Results: ATTO showed Corsair Neutron XT 240GB SSD maxing out at 563 MB/s read and 544MB/s write in the standard overlapped I/O benchmark. This drive is rated at having up to 560MB/s read and 540MB/s sequential write speeds on ATTO, so we are just slightly above the advertised ratings so far. These speeds are about as good as you’ll get on the SATA interface and 563MB/s read is the fastest that we have ever seen on our ASUS Z97-A motherboard.

Benchmark Results: The Corsair Neutron XT 240GB SSD scored 541.9MB/s read and 518.5MB/s write on the sequential test when we ran the drive on the CrystalDiskMark storage test with the default settings (incompressible data). The 4K scores were pretty impressive as they topped out at 40.4MB/s read and 139.9MB/s write. We also ran the 0x00 (0 Fill) test (compressible data) and found that the sequential read/write performance of the drive was about the same; although the 512K and 4K read scored saw significant improvements.