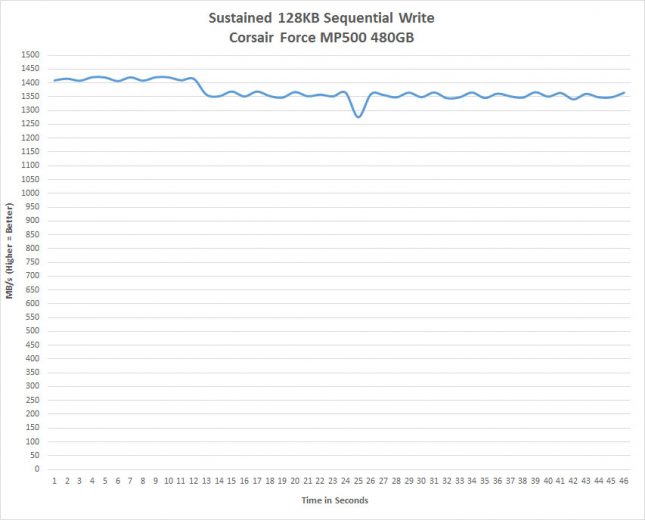 The Corsair Force MP500 starts out at around 1420 MB/s sequential write speeds, but after 12 seconds (17GB of writes) the performance dropped roughly 100 MB/s and went down to around 1350 MB/s.  When you average the test results over the 45 second period the average speed is 1369 MB/s.

Not bad performance as the Corsair Force MP500 is without a doubt one of the fastest SSDs around with regards to sequential write performance, but we planned on seeing that due to the high-end Phison controller and use of MLC NAND Flash. 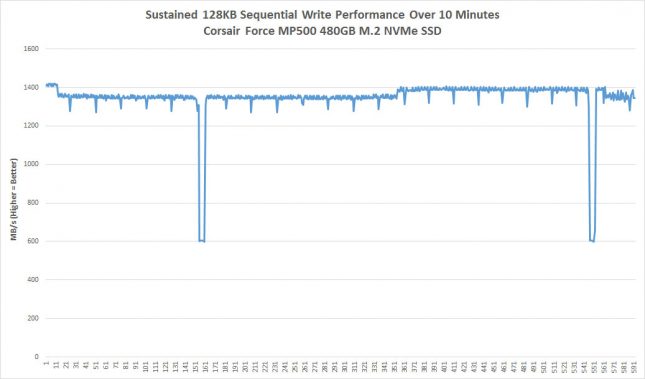 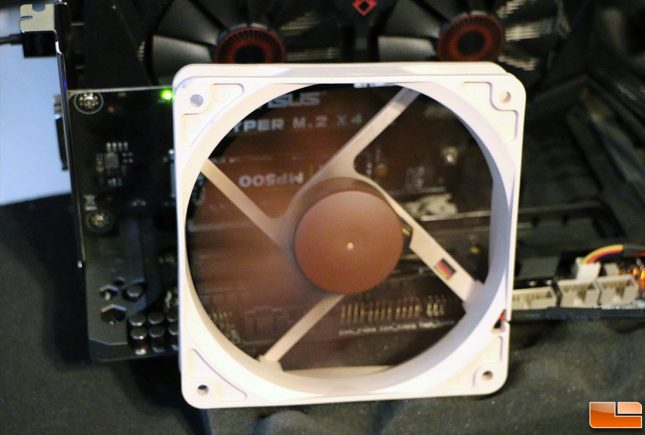 A quick look at the drives temperatures showed that we were hitting 67C and that was with a 120mm case fan sitting directly over the Corsair Force MP500 480GB M.2 NVMe drive blowing cool air over it. Before we started the sustained write test we were bouncing around 29C to 35C on the drive at idle. We set the polling rate to 10 seconds for this test and you can see how the drive heats up in this test below.

Phison has told us before that the E7 controller is rated for use at up to 125C and that the temperature sensor is located on the controller itself and not externally like some other designs. Some might think that this drive is close to overheating as Corsair gives the operating temperature range for this series as being between 0° ~ 70°C, but that is for the room temperature and not for the device itself. Corsair let us know that thermal throttling is triggered on the Force MP500 series at 80C and then performance will be scaled back until the temperature is back under 80C.

Once the heavy load was completed it took just over a minute for the drive to recovery down to normal ‘idle’ operation temperatures. Keep in mind that this is  with a 120mm case fan blowing directly on the MP500 470GB SSD. This drive runs hot like the Patriot Hellfire and other drives we’ve tested using the the Phison 5007 controller, so this isn’t a drive that you’ll want to stick in a laptop with limited airflow. The good news is that the dual sided design will limit the mobile devices that it will fit into and that likely isn’t a bad thing due to the temperatures.