Corsair hasn’t been that aggressive in the SSD market recently, but all that changed earlier this month when their announced the Force MP500. This drive marks a number of firsts for Corsair as it is their first drive to ever use the M.2 2280 form factor, PCIe interface, and the NVMe protocol. Since this is Corsair’s first PCIe Gen 3 x4 SSD it has blisteringly fast sequential speeds of up to 3,000 MB/s read and 2,400 MB/s write, which makes it roughly 5 times faster than the Corsair Nuetron Series XTi drives that used to be their flagship storage drive series. Things are also impressive on the 4K Random Read/Write performance as the Phison 5007-E7 controller and 15nm Toshiba MLC NAND Flash are capable of reaching up to 250,000 IOPS for 4K Random Reads and 210,000 IOPS of 4K Random Write performance. 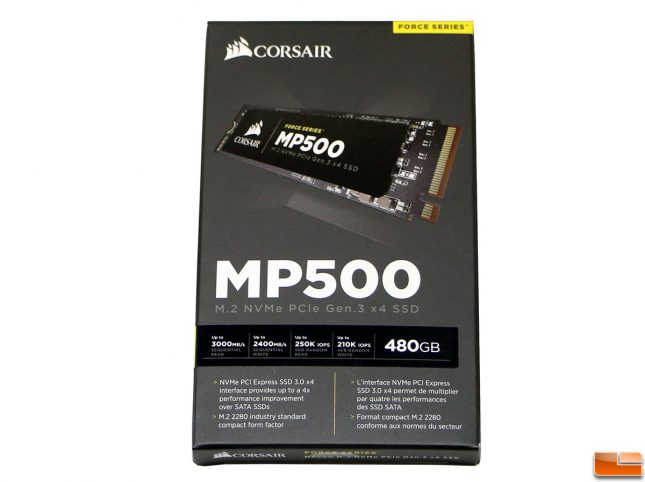 The Corsair Force MP500 M.2 drive is a double-sided M.2 PCIe drive that uses the 2280 form factor. This means that it can’t be used in low profile solutions that require single-sided modules. That isn’t necessarily a bad thing as the Corsair Force M.2 480GB drive uses up to 6.92 Watts of power and does get really warm as you’ll see in our testing. 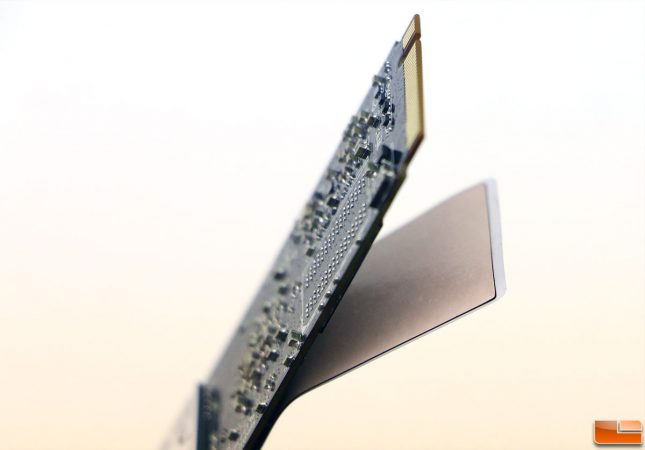 We peeled our sticker back as we noticed that it had two main layers. One is a thermal layer that appears to have a piece of copper in it and the other is your typical paper material that makes up the product label. Corsair went with a thermal pad to help the drives Phison controller thermal properties in check.

Flipping the drive over you’ll find two more Toshiba 128-gigabit 15nm planar MLC NAND Flash chips and a spot for more memory, but it is not being used. Let’s peel that warranty label back and take a look at the NAND Flash memory. 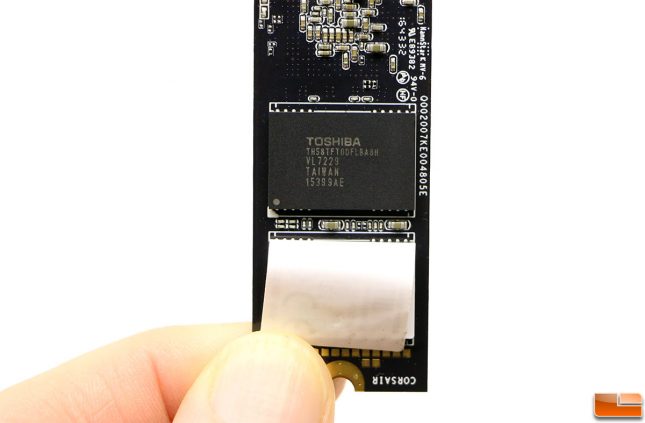 The Corsair Force MP500 M.2 drive series can be used with the Corsair SSD Toolbox, which is a free utility that allows end users to access more of the drives features. This utility will let you check how much of the drives endurance is left, show how much space is being use, the S.M.A.R.T. details, perform a secure erase and even update the firmware. Corsair hasn’t updated the basic functionality of this utility for some time and it’s starting to need an update as it can’t read the NVMe drives S.M.A.R.T. details, show total host writes/readts, run a secure wipe, change the overprovisioning or mess with the TRIM command settings. Basically over half of the tabs don’t work with this NVMe drive! 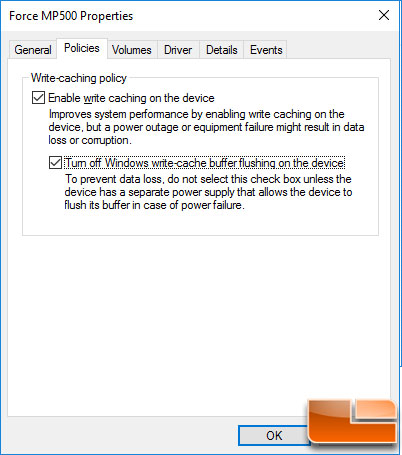 The Corsair Force MP500 M.2 PCIe SSD series does not require NVMe drivers to work properly on a PC. That said, you need to understand that standard Windows NVMe driver in Windows 10 and Windows 8.1 doesn’t pass the Force Unit Access (FUA) command. FUA commands bypass the DRAM cache on the SSD and write directly to the drives cache resulting in really bad performance. Storage review sites that use AS SSD, Anvil and PCMark (Storage 1.0) may show low write performance due to this. You can do registry hacks to disable FUA or simply turn off Windows write-cache buffer flushing in Windows Device Manager for the storage drive you want to benchmark. Companies like Intel, Samsung and OCZ have released special NVMe drivers for some of their NVMe drivers to remedy this situation. We’ll show you AS SSD and Anvil scores with Windows Write-Cache Buffer Flushing off.