Temperatures are important to enthusiasts and gamers, so we took a bit of time and did some temperature testing on the the ASUS version of the ASUS Radeon R9 390X STRIX 8GB video card. 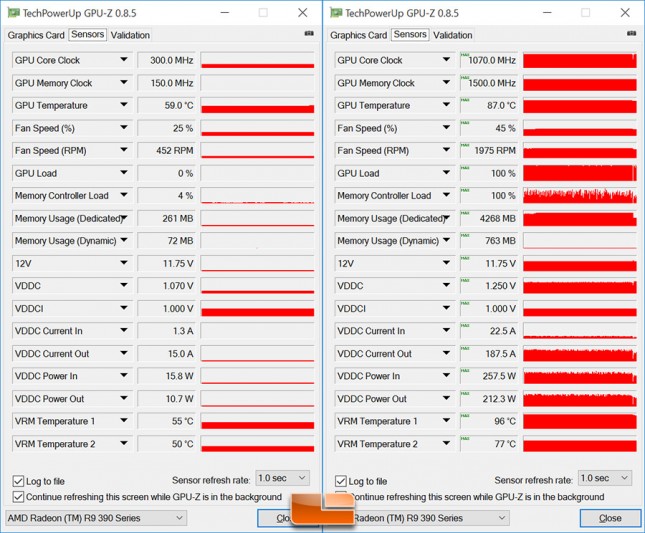 The ASUS Radeon R9 390X STRIX 8GB graphics card had a fan that didn’t run at idle. This caused the card to slowly heat up and eventually peak at 59C on the GPU and 50/55C on the two VRM temperature sensors. While gaming for an hour on the card we topped out at 87C on the GPU with the VRM 1 temerature hitting 96C and VRM 2 temperature hitting 77C. This is pretty toasty, considering the large cooler that is being used on this card and the fact that all three fans are running. GPU-Z showed the fans running at ~2000 RPM while gaming. It should be noted that we tested on an open test bench in a room that was 22C. 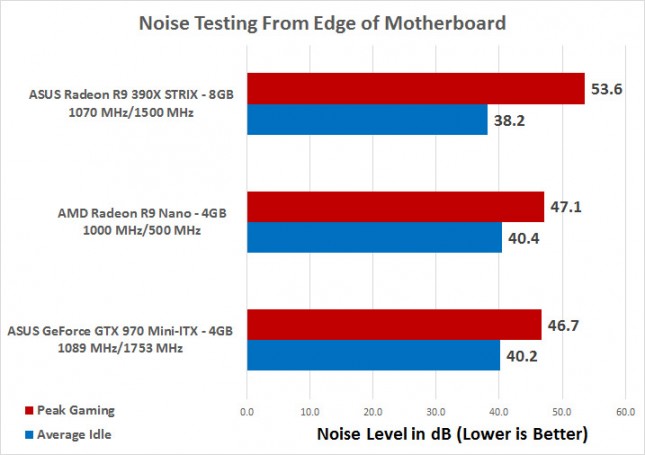 When it comes to noise level, the ASUS Radeon R9 390X STRIX doesn’t make any noise at an idle since the fans aren’t spinning, but once the GPU goes over 65C the fans kick on and you’ll certainly hear them. We were a bit shocked by how loud and hot this card got with the DirectCU III GPU cooler as we just assumed it would be quiet and cool running due to the size and weight of the cooler. The ASUS Radeon R9 390X STRIX 8GB video card is a hefty card that screams of quality, so hitting 87C while gaming and nearly 54 dB was a shock. The only other AMD Radeon R9 390X video card that we’ve reviewed was the PowerColor Radeon R9 39oX and when we tested it we were running Windows 8.1. This is the same test system with a clean install of Windows 10, so we didn’t combine the numbers as the benchmarks results might be slightly off due to very minor OS or driver differences. On that card we topped out at just 67C, but the fans were screaming at 63 dB to keep the temps that low. You can use the ASUS GPU Tweak II utility to go in and customize your own fan curve/profile if you like and we highly suggest doing that. The ASUS Radeon R9 390X STRIX8GB video card will never be a quiet card at full load, but you should be able to bring the temperatures down a bit at idle/load by doing some manual fan adjustments. Running close to 60C at idle and 90C at load might not be ideal to enthuasists, but if you kick the fans on earlier and spin them up higher as the temperatures go up, you’ll be able to take the Hawaii XT GPU used on the Radeon R9 390X!