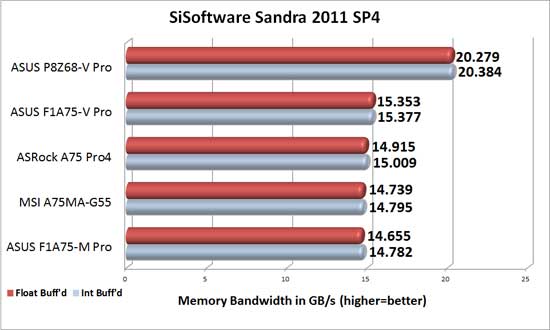 Benchmark Results: It’s interesting to note, that the performance order of our AMD A75 boards also happens to be the order that they have been reviewed. As the A75 chipset matures we begin to see much more refined versions of the system BIOS. In this case we are seeing a gain in the memory bandwidth. Looking at the performance of the first board we looked at, the ASUS F1A75-M Pro which is quite comparable to the F1A75-V Pro, we see a boost of ~.7GB/s in the float buff’d and .6GB/s in the Integer Buff’d results.