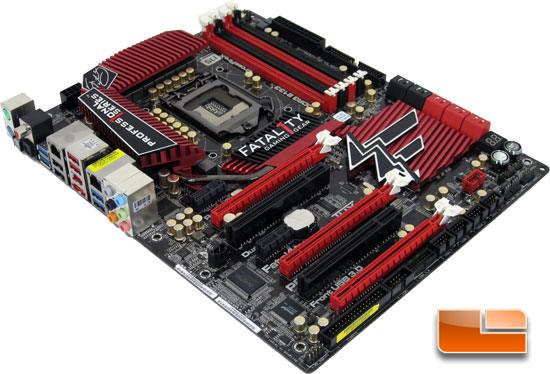 The ASRock Fatal1ty Professional P67 motherboard is quite appealing to look at. Built upon a black PCB and adorned with a combination of black and red heatsinks and expansion slots. While it may be easy on the eyes, that doesn’t weigh heavily on our opinions of the board itself. If the ASRock Fatal1ty Professional is the best looking motherboard out there to you, it wont mean much if it doesn’t perform or have the features that you need. 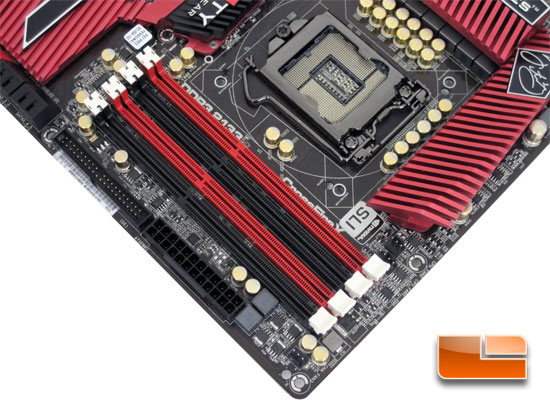 Taking a look at the area around ASRock Fatal1ty Professional P67 motherboard LGA1155 socket we can see that it is surrounded with 100% Japanese made solid capacitors. The capacitors are finished with a premium gold coating that according to ASRock represent long life and stable performance. The ASRock Fatal1ty Professional will support 32Gb of memory in a dual channel configuration. We can also run the memory at 2133MHz. If you are planning on running a CPU heatsink like the Corsair A70 that supports dual fans, you are in luck. The Fatal1ty Professional has a pair of CPU fan headers. Though only one of the fan headers is a four pin, the other is a three pin header. 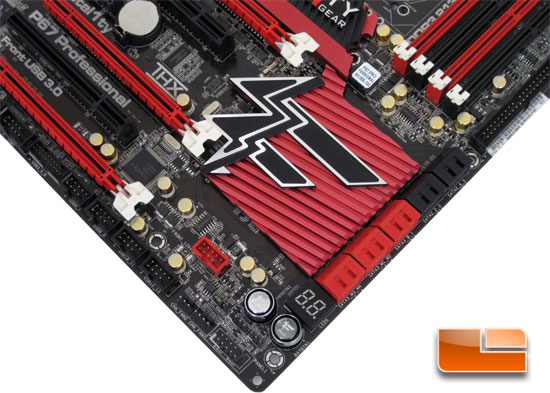 The ASRock Fatal1ty Professional supports a total of ten drives through the SATA Ports. The four black SATA ports are the native SATA II ports. There are a total of six SATA III ports, the pair of red ones immediately to the left of the SATA II ports are the SATA III ports that are controlled by the Intel P67 chipset. The remaining four are controlled by a Marvell SE9120. Just beyond the SATA III ports is a Debug LED followed by an onboard reset and power button. Moving around the corner of the Fatal1y Professional, we have the pin outs for the front panel, a 4pin fan header, 3pin fan header, four USB 2.0 headers, and the front panel USB 3.0 header. Just above the first USB 2.0 header is the front panel IEEE1394 header. 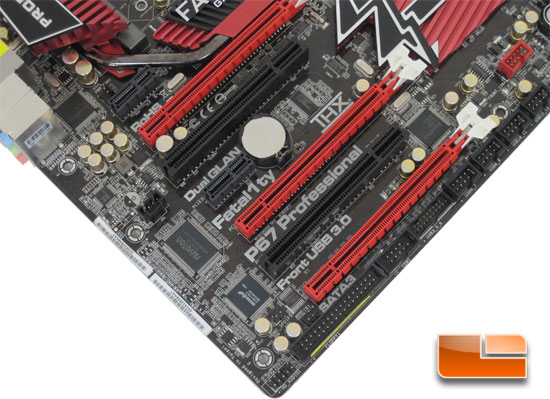 Swinging the ASRock Fatal1ty Professional around we can get a good look at the layout of the Expansion slots. The ASRock Fatal1ty Professional has three PCIe x16 slots. The first one runs at x16 when we run a single graphics card, when we throw in a second card in to the mix for a little bit of SLI or CrossfireX action they will run in an x8/x8 configuration. If we were to throw in a third card they would run in x8/x8/x4. We also have a pair of PCIe x1 slots as well as a pair of PCI slots. In order to gain a few extra PCIe lanes ASRock incorporated a PLX PEX8608 chip. Picking up were we left off along the edge of the Fatal1ty Professional we have the header for the serial port followed by a floppy drive controller. That little piece of tech I was hoping was long gone from today’s enthusiast boards. Buried in the corner is the front panel audio header. The chips embedded into the ASRock Fatal1ty Professional include an asmedia ASM1083, NUVOTON NCT6776F, Realtek ALC892 HD Audio Codec, and just behind the audio jacks on the rear panel is one of two Etron EJ168A 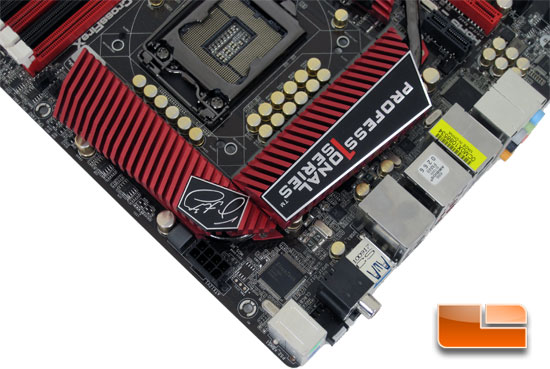 The space between the rear panel and the heatsink assembly is hiding a pair of Realtek 8111E Gigabit Ethernet controllers. This view gives us a look at the hefty heatsink for the the power circuitry which uses a heatpipe design to keep the PWM’s nice and cool during those long frag fests.

Taking a look at the back panel we have the typical suspects. Though it has been a while since I have seen a PS/2 port for both a keyboard and a mouse. The ASRock Fatal1ty Professional has a total of four Super Speed USB 3.0 ports, four USB 2.0 ports one of which happens to be the Fatal1ty Mouse port. There is a pair of Gigabit Ethernet ports, Coaxial and Optical SPDIF out ports, eSATA3 port, Firewire, and six audio jacks.