How well does the AMD Radeon R9 290 overclock?  We were wondering the same thing, so we’ll be taking a look at overclocking the Radeon R9 290 using AMD OverDrive. 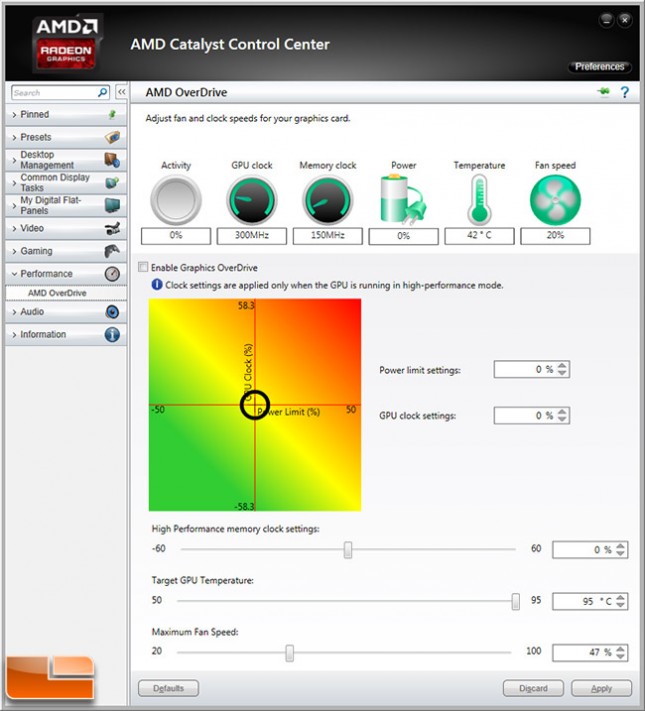 AMD gives you more control than ever, but has completely redesigned the Graphical User Interface (GUI). The first thing that you’ll notice is that there is a crazy XY chart with a target that you can move around to select your settings. AMD officially calls this a 2-dimensional heat map. They hope this new deisgn makes it more intuitive for end users to tune their video card. The AMD Radeon R9 290/290X are both fully dynamic, so there is no longer an absolute clock to set. This means that overclocking is now done by percentages and not fixed values.

AMD Overdrive lets you either raise or lower both the GPU clock and the power limit of the card. You can also manually enter in the power limit and GPU clock settings, so you don’t have to use the chart if you don’t want to. Under the new XY chart you’ll find that you can raise and lower the GDDR5 memory clock frequency by -60 to 60 percent over default. You can also adjust the temperature target between 50C to 95C and manually adjust the maximum fan speed. The AMD Radeon R9 290’s default settings are to have the target GPU temperature at 95C and the fan speed at 47%. It should be noted that you can’t manually control the fan speed any longer as you can just control the maximum speed that it can run up to. 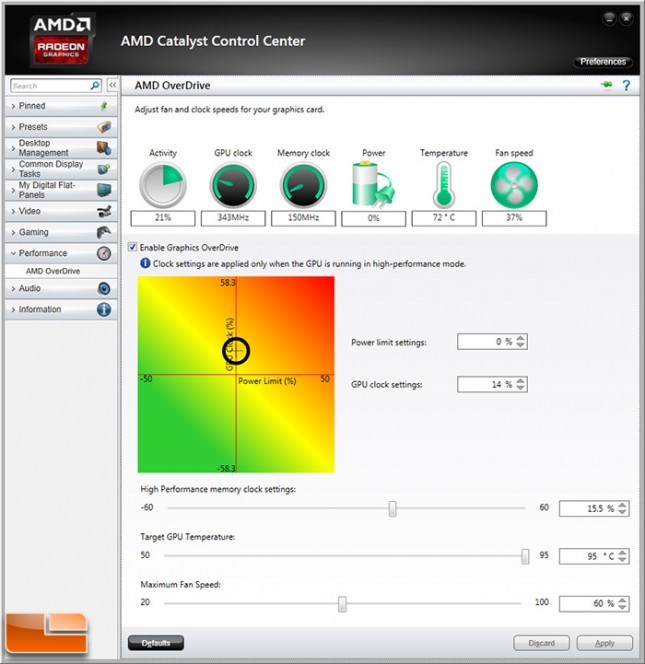 We spent a fair bit of time overclocking the AMD Radeon R9 290 with AMD OverDrive and found that our particular card did not care for increased power limit setting at all, so we left that to zero. We were able to overclock the AMD Radeon R9 290 reference card by 14% on the GPU core clock and 15.5% on the 4GB GDDR5 memory. We bumped the fan up to 60% as we weren’t too worried about fan noise during our overclock.

The AMD Radeon R9 290 graphics card scores right around 9100 3DMarks in the standard Fire Strike benchmark. Our exact score on this one instance was 9124 3DMarks and notice that in Game Test 1 the outcome was around 48.5 FPS. 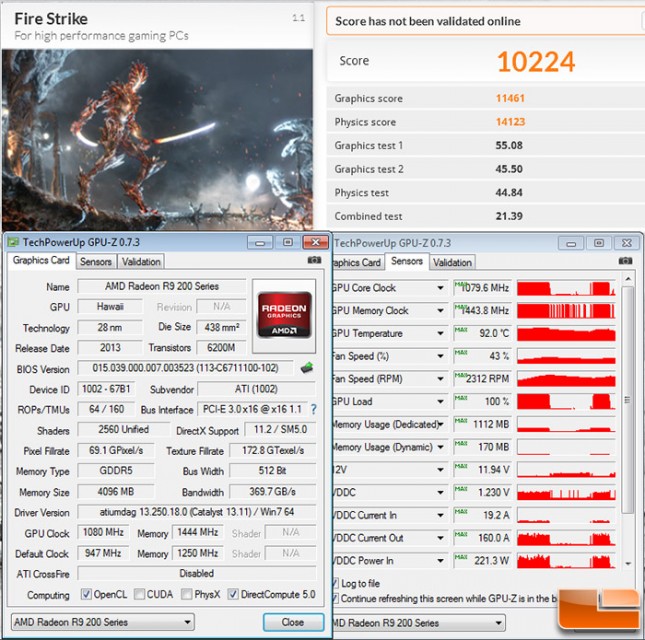 With our Radeon R9 290 overclocked as high as we could get it, we were hitting 1080 MHz core and 1444 MHz on the 4GB of GDDR5 memory (5776 MHz effective). This is a 133 MHz on the core and 194 MHz on the memory. With the card overclocked with these setting we were able to run 3DMark Fire Strike at 10,224, which is a nice improvement over the default run of 9,124 3DMarks! This is an 1,100 point increase in our overall 3DMark score, which represents a performance gain of 12.1 percent. We overclocked our GPU clock speed by 14 percent, so you do get some nice performance boosts from overclocking.  Game Test 1 went from 48.5 FPS to 55.1 FPS!

By overclocking the AMD Radeon R9 290X we were able to get on average a 12.68% performance increase on real game titles like Bioshock Infinite, Tomb Raider and Hitman Absolution. These are significant performance gains as you can really notice going from 33FPS to 37FPS in games like Hitman Absolution when playing at Ultra HD resolutions like 2560×1600.