When the AMD Radeon HD 7970 was introduced in 2011 it cost $549 and made short work of NVIDIA’s GeForce GTX 580 video card. The AMD Radeon HD 7970 uses the Tahiti GPU that has 2,048 stream processors built on the TSMC’s 28nm process technology with 3GB of GDDR5 memory on a 384-bit bus. If someone would have told us back in 2011 that this video card would be re-branded and still being sold in 2014 we would have laughed, but here we are nearly two years later. The AMD Radeon 200 series will be headed up by the Radeon R9 290X, but that flagship card has not been released just yet. The second fastest card is the AMD Radeon R9 280X and that is the re-branded Radeon HD 7970!

Not too many people like re-brands, but who doesn’t like price cuts? AMD has slashed the price of this card down to $299 and has made some minor adjustments to the clock speeds and have slapped on an improved GPU cooler. It is said to see a card that once held the performance crown being demoted, but this is a testament of how well designed this card was as it is still viable solution here in 2013 and moving into 2014.

Our friends at ASUS, MSI and XFX sent us retail cards for us to take a look at. Each of the cards are running at various clock speeds, so it should give us all a pretty good idea of what we can expect from the AMD R9 280X lineup.

The XFX Radeon R9 280X Double Dissipation is clocked at the AMD Radeon R9 280X reference clock speeds, but comes with with higher quality components, a beefed up ‘Double D’ GPU cooler and an insane limited lifetime warranty if you register the card within 30-days. This cards GPU cooler design is very interesting as it has six heatpipes and uses vertical aluminum cooling fins on the two heatsink arrays. This means that the IP-5X dust free fans are blowing air across them and the exhaust is going vertical and not along the length of the card. Note that the base clock speed is just 850MHz and that the boost clock is 1000MHz. This is a 250MHz gap, which is the largest of the group.

Next up we have the MSI Radeon R9 280X Gaming, which is the shortest card of the bunch at 10.6″ in length. This card is similar to the XFX Radeon R9 Double D in the sense that it uses the standard 5+2 power phase design (Five phases for the GPU and 2 phases for the memory and I/O), but it has a 50MHz higher core clock speed and a Twin Frozer GPU cooler with five heatpipes with a pair of heatsinks with fins going in the traditional horizontal direction.

Lastly we have the ASUS Radeon R9 280X DirectCU II Top Edition. This card comes clocked at 970MHz base and 1070MHz for the GPU boost clock, while the memory is clocked at 1600MHz (6400MHz effective). This is the highest clocked card of the bunch and is clocked 120MHz (14%) higher on the base clock, 70MHz (7%) for the boost clock, and 400MHz (7%) for the memory overclock. This card is the most radical of the bunch and features a beefed up 8+2 power design, Cooltech fan technology and a GPU cooler that has five heat pipes. One of the five heatpipes is 10mm thick, which is the largest that we have ever seen on a video card! 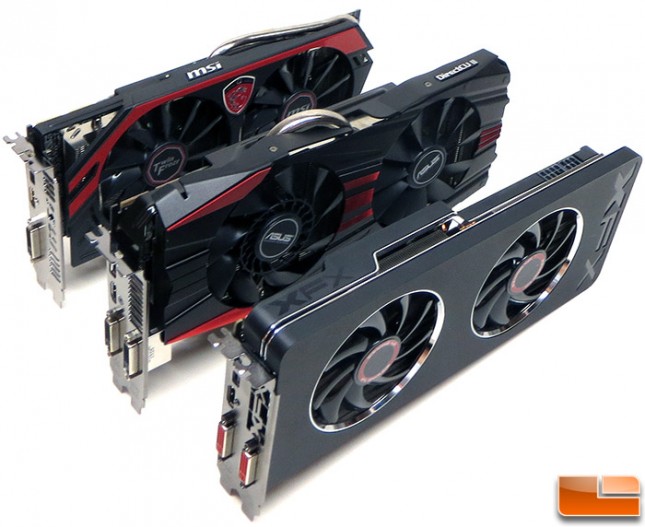 All of the cards feature a black PCB with black fan shrouds and black fans. The accent color on all of these Radeon R9 280X’s just happens to be black.

Usually around the $300 price point you see some backplates being used, but ASUS, MSI and XFX opted not to use a backplate on any of these models. Each company is using their own PCB design, so there are no similarities in layout design. Each company is using solid-state capacitors and beefed up chokes, so the build quality should be excellent for each. 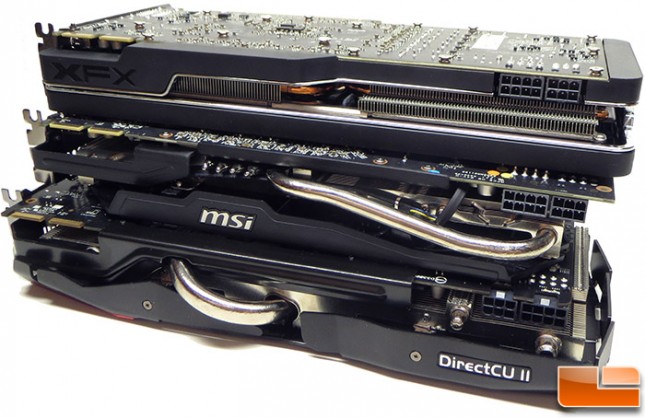 Looking down at the top of the cards we can see that all have a pair of 6-pin and 8-pin PCI Express power connectors that are needed for proper operation. It should be noted that the ASUS Radeon R9 280X TOP Edition card has had the power headers flipped for easier removal. ASUS also includes LED lights (red and green) that show if the power is properly connected. All of the cards have a pair AMD CrossFire interconnects for pairing of more than one card together. Next to the CrossFire connectors you’ll find a BIOS switch on the MSI card and it is the only card to have such a switch.

Note the large 10mm heatpipe stick out of the ASUS DirectCU II GPU cooler and that the vertical fin arrangement used by XFX on their Ghost 2 GPU cooler. 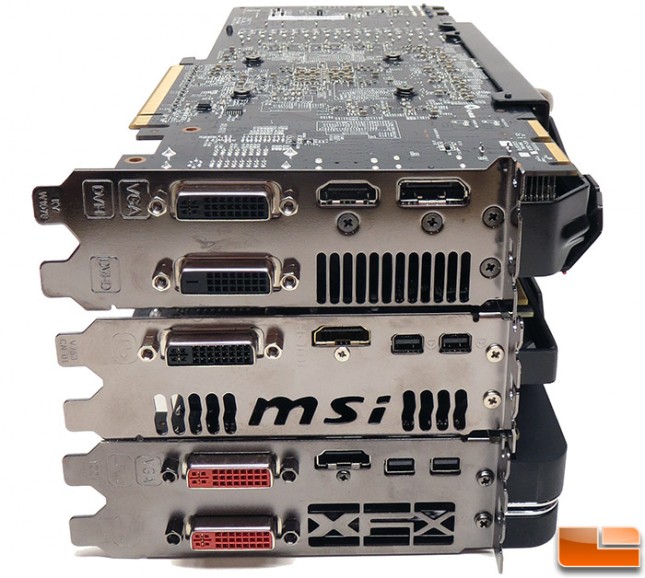