The new AMD Radeon R7 and R9 series video cards went on sale this morning and a number of our readers have asked if they can enable AMD CrossFireX technology with their current AMD Radeon HD 7000 series card with them. The new AMD R-200 series is essentially a product re-brand, so the hardware is the same. AMD confirmed to use earlier this week that you would be able to run mixed CrossFire, but we wanted to try it out for ourselves and see how it works in the real world. 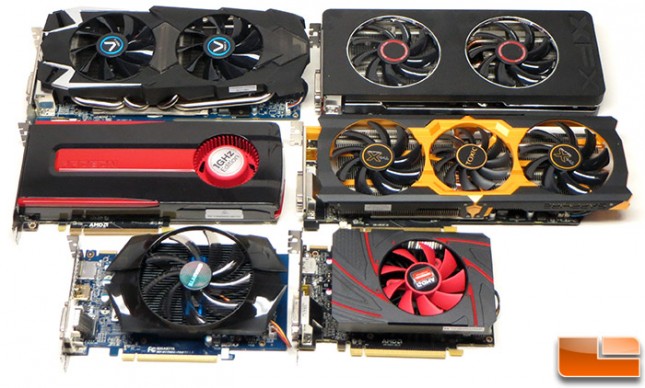 For this test we gathered up three AMD Radeon HD 7000 series cards and three of the new AMD R7 and R9 200 series cards to see how they would work together when setup in a mixed CrossFire configuration. If you take a look at the image above you’ll see that we have a Sapphire Radeon HD 7970 Vapor-X 3GB video card that we will be pairing with an XFX Radeon R9 280X. Next up we have the original AMD Radeon HD 7870 GHz edition reference card that we’ll be pairing up with the Sapphire Radeon R9 270X Toxic. Then we’ll conclude with a look at the Gigabyte Radeon HD 7790 OC and the AMD Radeon R7 260X reference card. It should be noted that we purposely picked cards from different manufactures and all had different clock speeds. We really wanted a ‘worst case’ scenario to ensure CrossFire really was working. 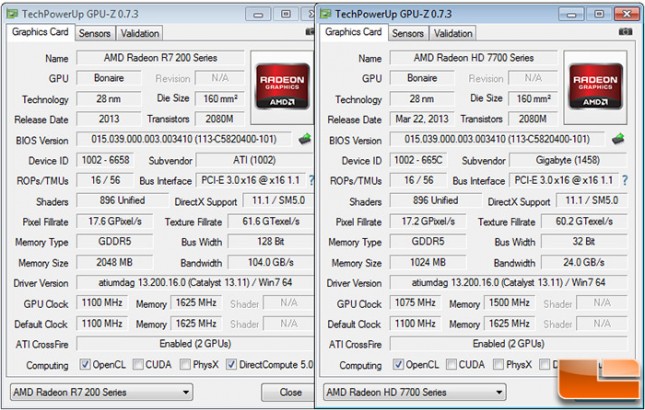 First up we have the AMD Radeon R7 260X reference card and the Gigabyte Radeon HD 7790 OC. We used AMD Catalyst 13.11 beta drivers and had no issues with enabling CrossFire with a single interconnect. No issues were found whatsoever and the AMD Catalyst software suite worked like a charm. We heard a rumor that you didn’t need to use a CrossFire bridge when running CrossFire on two AMD Radeon R7 260X cards, but we don’t have two cards to try that out with. Since both the Radeon HD 7790 and Radeon R7 260X use the same ‘Bonaire’ we figured we’d try without an interconnect here. 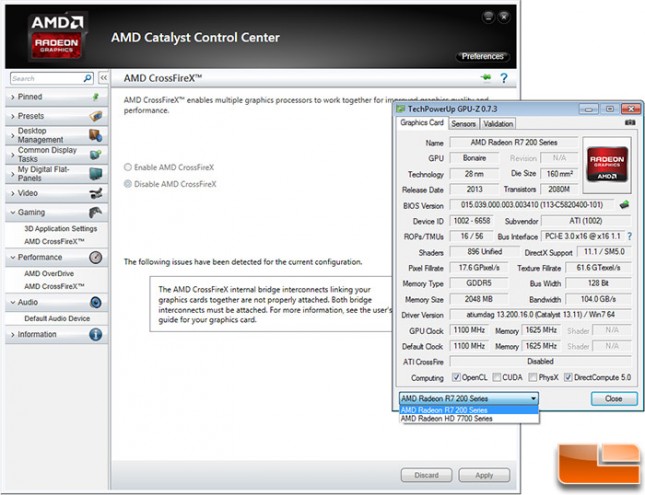 We were unsuccessful in getting AMD CrossFireX to enable without the ribbon bridge being installed. It was worth a shot right? 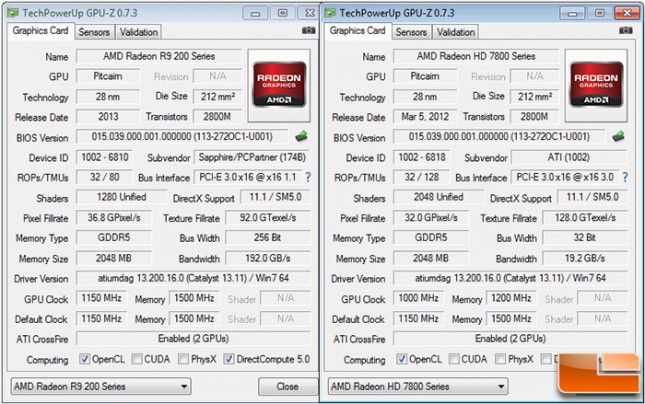 The AMD Radeon HD 7870 GHz edition reference card and the Sapphire Radeon R9 270X Toxic were able to run CrossFire and no issues were found. 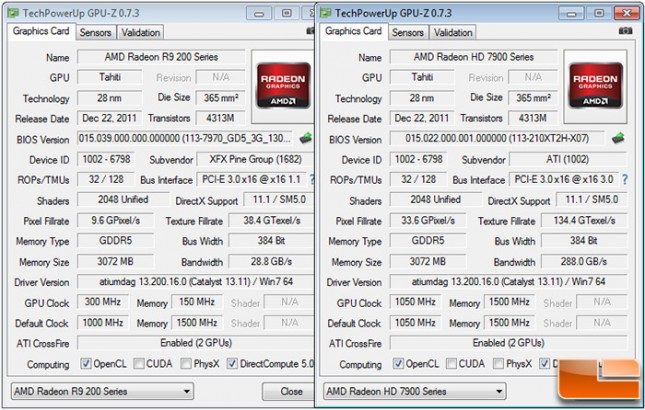 The Sapphire Radeon HD 7970 Vapor-X 3GB and XFX Radeon R9 280X also were able to run CrossFire together just fine. We noticed that GPU-Z was incorrectly showing the GPU clock speeds one of the cards, but it was running fine. It should be noted that you can overclock most of the AMD Radeon HD 7000 series cards up to the clock speeds of the new AMD Radeon R7 and R9 200 series cards and we were able to do that on some of the cards. To get the most out of your AMD CrossFire setup you’d likely want to clock speeds to be close to the same as otherwise you’d be limited by the slower of the two cards.

The point of this article was to see if you could CrossFire one of the AMD Radeon HD 7000 series cards with the respective card in the new AMD R7 & R9 200 series and we proved that to be true today. We weren’t wanting to do a performance review as there are so many variables in a mixed CrossFire article, but we’ll leave you with the 3DMark Fires Strike results of the new AMD Radeon R7 260X, Radeon R9 270X and Radeon R9 280X and then again paired in mixed CrossFire with their respective partner card. 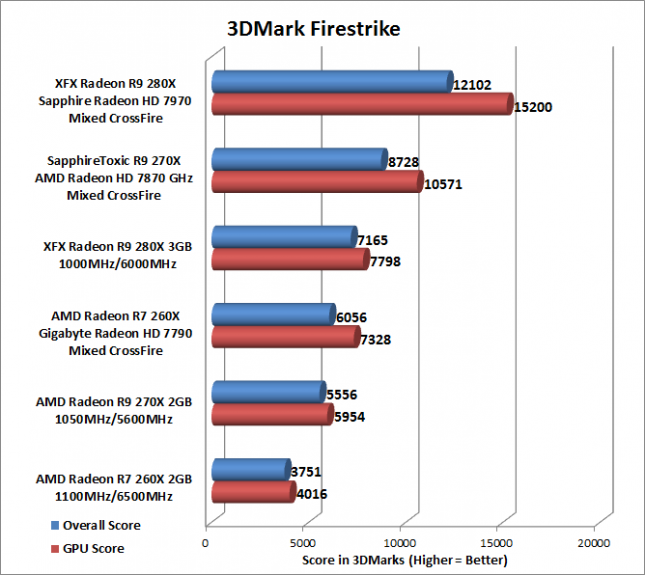 The performance scaling looks pretty solid across the cards and you can clearly see how AMD CrossFire can give you a nice boost in performance.

It should be noted that AMD plans to end the AMD Radeon HD 7790, 7800 and 7900 product lines and expects inventory to be dried up before the holiday season. If you wanted to purchase a matching card for your current AMD Radeon HD 7000 series card be sure to do it sooner rather than later. If you are too late, you don’t have too much to worry about as you can easily mix and match it with a new AMD Radeon R7 or R9 product. The fact that you can mix brands, clock speeds and even card generations is pretty slick and makes for a good user experience! Yes, this is just a re-brand, but AMD could have locked out the ability to CrossFire these cards in the BIOS or drivers if they really wanted.

Let us know if you have any questions!