Overclocking greatly varies due to what hardware is being used and
who is doing the overclocking. Always remember that no two pieces of
hardware will perform the same, so our results will differ from what you
might be able to get.

AMD says that with Bulldozer processors that you should be able to hit 4.6GHz on the AMD retail boxed CPU cooler and possibly even 5GHz if your motherboard allows you to disable the cores down to just two. We just have the stock AMD cooler on our test system, so it will be interesting to see what we can hit here. 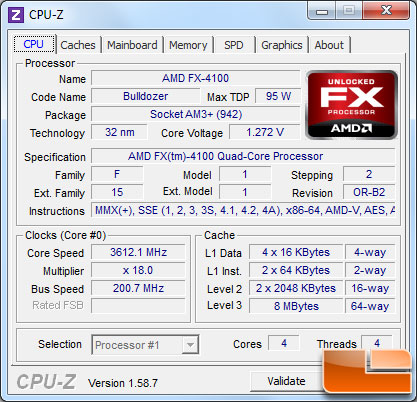 The AMD FX-4100 has a standard base clock frequency of 3600MHz, but it can reach 3800MHz in ‘CPU Max Turbo’ mode, so it shouldn’t be that hard to get to 4.6GHz or 4.9GHz right? The FX-4100 starts off with a base clock of 200MHz
with a multiplier of 18. All AMD FX series processors feature an unlocked multiplier, so you can both lower and raise the multiplier in the BIOS. You can also adjust the base clock frequency to better dial in the overclock. Since we were time limited we overclocked by just using the multiplier to see how far we could push our processor. 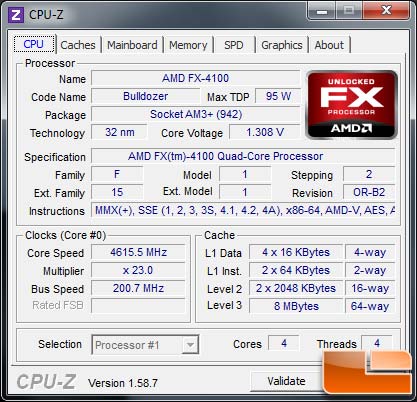 With everything left to default in the BIOS and by just raising the multiplier up to 23.0 we were able to reach 4615.5MHz with Turbo disabled. This means that all four cores were running this fast without any CPU or board voltage adjustments on the factory CPU cooler! Not bad performance numbers at all! We could get into Windows 7 at 4700MHz, but the system would blue screen as we needed to bump the voltage up. Things were starting to get toasty at 4.6GHz on the stock CPU cooler, so we called it a day here with a solid 1GHz overclock! 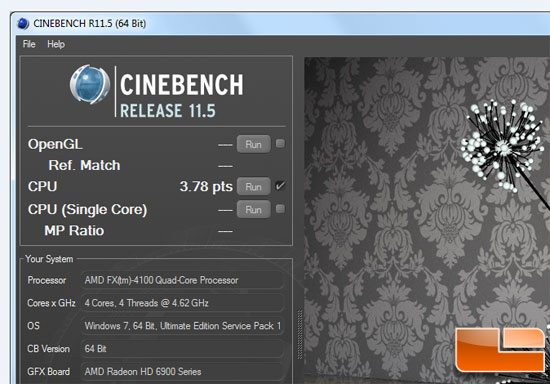 Reaching 4600 MHz with full stability on the FX-4100 is a great overclock considering the standard clock speed of this processor is 3600MHz. If you look at it like that, this overclock is 1000MHz!