File encryption and compression are two heavy CPU usage tasks.  CipherShed is based on TrueCrypt, and is an open source encryption program.  Included with CipherShed is the same benchmark that made TrueCrypt an important tool in analyzing encryption performance. While 7-Zip is a very common tool that users might find themselves using to compress data for email, or saving storage space 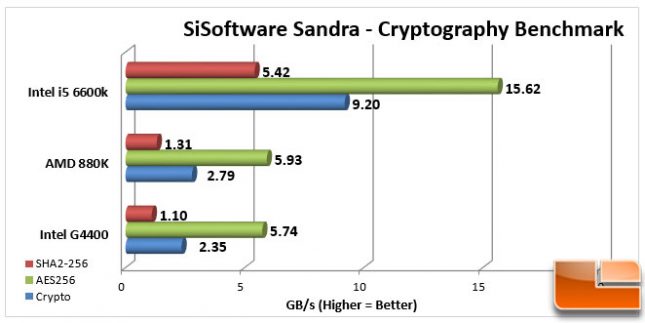 Legit Reviews Benchmark Results:  As we stated, file encryption and compression uses advanced algorithms to manipulate the data, which uses the CPU processing power to it’s fullest.  We expect a big difference between the Intel i5 and the AMD 880K.  The difference between the two low cost options though, was a bit surprising.  For encryption, the difference was between 13% and 33% depending on the type of encryption you wanted to use.  File compression, the 880K took an even stronger lead, with between 25% and 40% better performance.