The morning the Intel QX6700 article was to be posted Legit Reviews was e-mailed by one of the developers over at POV-Ray to see if LR could include real-time raytracing in our performance analysis of Kentsfield.  After spending a bit of time to get the beta software to work correctly LR has some of the only real-time raytracing numbers available for Conroe and Kentsfield.

E-Mail From POV-Ray — I thought I might ping you about an experimental feature we’ve added to the POV-Ray SMP beta: real-time raytracing. It’s mostly useful to folks who have multi-core systems and in fact is something that I’ve wanted to do for years but the hardware just wasn’t there (at least not in the consumer price range). It works best on a kentsfield or later, but a core 2 duo should be sufficient if you don’t mind sub-10fps frame rates.

If you want to try it out it please feel free to grab it from:  http://www.povray.org/beta/rtr/

This experimental software by POV-Ray was a welcomed addition to our testing and was able to spread the work load across the four processors as seen above. The number that is used to gauge performance is shown in the status bar at the bottom of the main window as seen in the above image of with Intel Core 2 Extreme QX6700 taking care of the rendering. 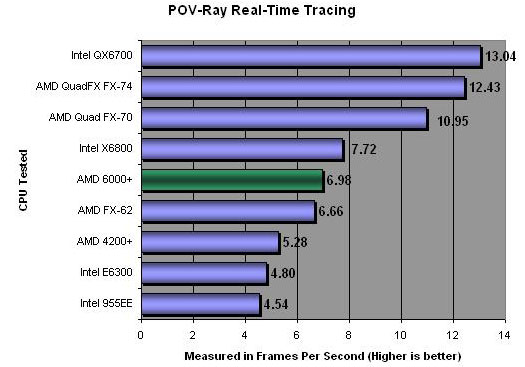