SiSoftware, founded in 1995, is one of the leading providers of computer analysis, diagnostic and benchmarking software. The flagship product, known as “SANDRA”, was launched in 1997 and has become one of the most widely used products in its field. SANDRA is used by almost 400 world-wide IT publications, magazines, review sites to analyze the performance of today?s computers.

Multi-Core Support: As well as SMP (multi-processor) and SMT (multi-threading/Hyper-Threading) support we have added multi-core support for future AMD and Intel CPUs. The benchmarks have been optimized to schedule the optimum number of threads on the optimum (virtual) CPU on both multi-core and Hyper-Threaded computers. 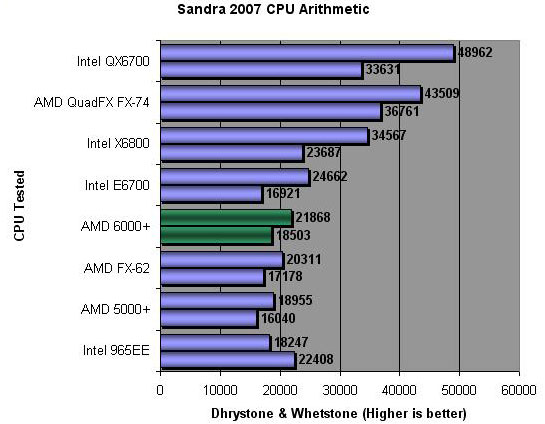 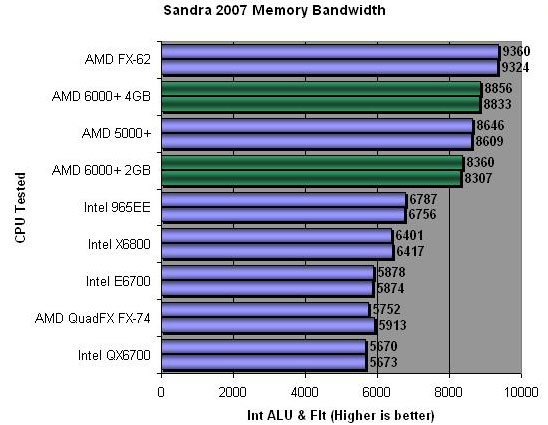 Our Memory bandwidth results should be no surprise.  The memory controller on the AMD chip continues to show its muscle here.  The 6000+ didn’t do as good as the FX-62 for unknown reasons, but everything was tested at 3-4-3-9 2T timings at 800MHz with four 1GB memory modules (4GB total).  We already covered how AMD AM2 systems perform better with all four banks full, but we wanted to show it again here. Included in the above chart are the performance results from a 1GB x 2 kit of Corsair PC2-6400C3 memory and also 1GB x 4 kit of PC2-6400C3.  As you can tell running all the banks full boosts bandwidth. 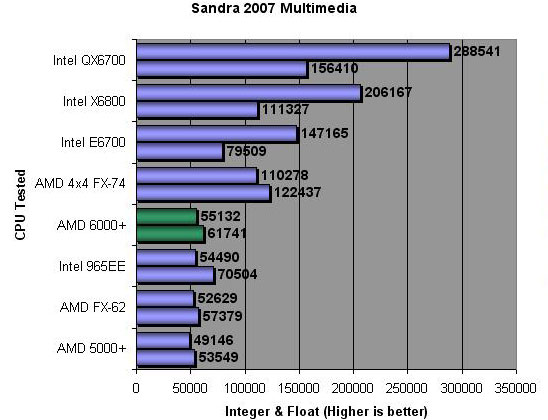 In Sandra’s Multimedia test, we see another huge gulf in the results between the new Core 2 Duo chips and the rest of the pack.  The 965EE comes in a distant third, with the two AMD chips following even further behind. The 6000+ is ahead of the FX-62, but behind the E6700.