At the end of the day the ADATA XPG Gammix S10 M.2 NVMe SSD is nothing more than the entry-level XPG SX7000 M.2 NVMe SSD, adding only a heatspreader. That isn’t a bad thing though as the performance of the drive was on par with what one would expect for an entry-level M.2 PCIe NVMe SSD. The ADATA GAMMIX S10 512GB topped out at 1811 MB/s read and 861 MB/s write in the standard sequential benchmark in CrystalDiskMark and that exceeds the drives rated speeds of 1800/850. We came up a bit show on the drives 4K Random Read/Write IOPS though. The drive is rated at 130K/140K and we came up with 108K/170K in our testing. Not a huge miss, but it would have been nice to see higher 4K Random Reads.

ADATA was able to get higher numbers on the XPG SX7000 and XPG GAMMIX S10 series than the Intel SSD 600P series for a couple reasons. It appears that Intel is only using 6 of the 8 SM2260 controller channels on their single-sided drive whereas ADATA is using all 8 of them. ADATA also confirmed that they are using a 32-bit memory interface for the DRAM while Intel is using a 16-bit memory interface for the DRAM. This has helped ADATA boost performance over similar drives and just goes to show how different performance can be between two drives despite having the same controller and NAND Flash packages.

When it comes to any entry-level drive the most important factor after capacity is usually price. The ADATA XPG GAMMIX S10 and ADATA XPG SX7000 series both have impressive price points.

After looking at the current pricing on Amazon.com the 128GB/256GB/512GB drives are all priced pretty aggressively and the 1TB model is priced too high. The Intel SSD 600P Series 512GB drive is priced at $210.81 shipped and has an endurance rating of 288 TBW with a 5-year warranty. The ADATA XPG SX7000 512GB drive has an endurance rating of 320 TBW and a 5-year warranty for $154.99 shipped. The drives have the same controller and TLC NAND flash, so we are shocked that one is $56 cheaper than the other. But, it gets better than that… 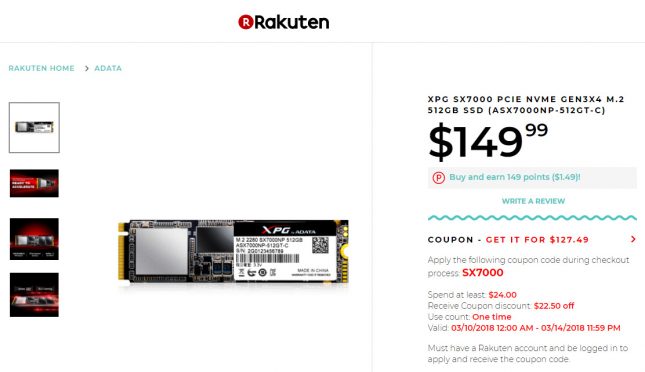 When doing pricing research for this review we found that Rakuten is selling the ADATA XPG SX7000 512GB SSD for $127.49 shipped right now (sale ends 3/14/2018). That puts the price per GB at $0.25, which is damn good for an entry-level M.2 PCIe NVMe SSD. The Samsung 960 EVO 500GB M.2 PCIe NVMe drive is $239.71 shipped, so you can get this drive for $112 less and that is substantial when pricing out a new system build or upgrade path. This drive would also made a nice secondary drive for those looking to store extra goodies. This is the first time we’ve seen a PCIe NVMe priced at 25¢/GB!

If you are looking to ditch the old SATA III interface and mover over to the super-fast PCIe Gen3 x4 interface the ADATA XPG SX7000 series appears to be the best value buy out there right now. If you wanted to get a heatsink on the drive for better aesthetics and possibly better thermal performance we suggest taking a closer look at the ADATA XPG GAMMIX S10 models. The heatsink isn’t needed, but it looks sweet, helps lowers temperatures and is only an extra $10.

Legit Bottom Line: The ADATA XPG GAMMIX S10 series is nothing more than an ADATA XPG SX7000 series drive with a heatsink slapped on it.

UPDATE 03/14/2018: We worked with ADATA to get better power usage numbers and got them for all available capacities. These numbers are for ADATA XPG SX7000 series and ADATA XPG GAMMIX S10 series drives! 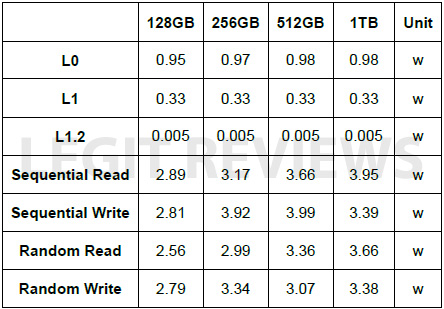