The readout on CrystalDiskInfo 7.5.2 shows that the ADATA XPG GAMMIX S10 series supports S.M.A.R.T. and the NVM Express 1.2 standard. The drive we received had firmware version CB1.1.1 installed and that is the version that we used for general testing and benchmarking. Our drive arrived in a sealed box, but showed a power time of 1 hour with three power cycles. The drive also had just over 500 GB of host read and writes done on it, so we aren’t sure if this was factory testing or if our drive was tested to ensure it was working properly before being sent to a review site. We don’t think we got a cherry picked sample, but just reporting back the honest truth of how the drive arrived. 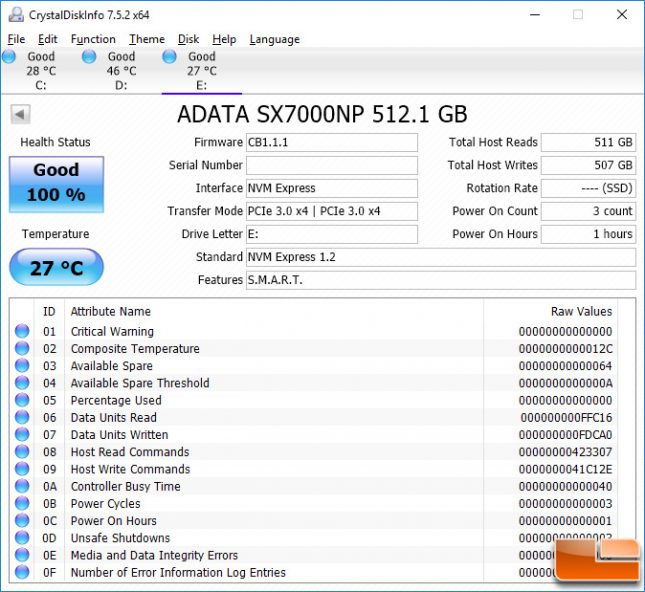 The overall capacity shows up as 476GB on the ADATA XPG GAMMIX S10 512GB drive in Windows 10 version 1709. Please remember that 1GB = 1,000,000,000 bytes. A certain portion of capacity may be used for system file and maintenance use, thus the actual available capacity may differ from the labeled total capacity. 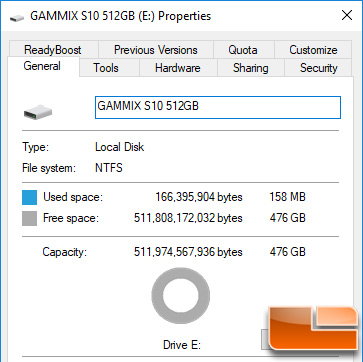 According to TRIMCheck v0.7, the ADATA XPG GAMMIX S10 does properly execute the TRIM command correctly as the random data that was written to the drive was properly cleaned.