The ADATA Falcon 1TB NVMe drive is rated a having speeds of up to 3,100 MB/s read and 1,500 MB/s write speeds in CrystalDiskMark. We managed to best that with speeds of 3,400 MB/s read and 1,634 MB/s write on our test sample. In ATTO Disk Benchmark we got 3.2 GB/s read and and 1.5 GB/s write, which again meets or exceeds the rated drive speeds. What is more impressive is that we were getting roughly 30% higher sequential read/write speeds over the ADATA Swordfish 1TB drive. This speed difference is why the Falcon is priced higher. The ADATA Falcon scored behind the Swordfish on the traces used in PCMark 10 and SPECworkstation 3, which wasn’t expected. We’ve brought that up to ADATA and they are looking into that with Realtek to see if something can be improved in the firmware. Yes, all controller manufactures tune their firmware to optimize for some of the major benchmarks. 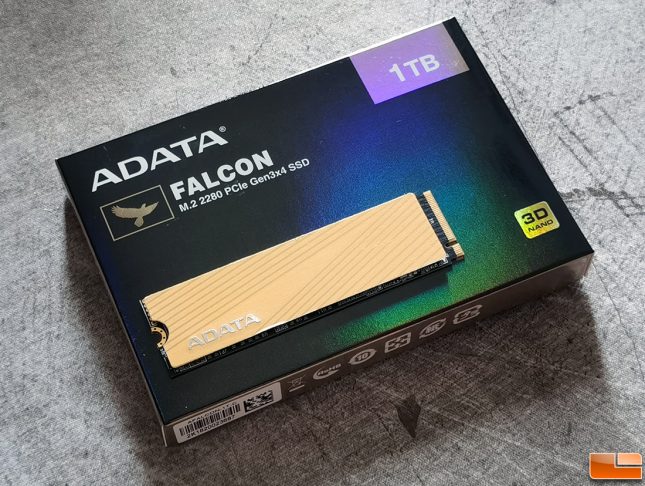 When it comes to pricing the ADATA Falconc costs about $0.13 per GB for the 1TB model that we reviewed today, but dips down to $0.12 per GB for the 2TB model. Current street pricing on the Falcon 256GB drive seems a bit high and it would be worth moving up to 512GB model to double the storage space and to get betters sequential and random performance.

At the end of the day we entered this review thinking that the ADATA Falcon would top the ADATA Swordfish in every single performance test since it has substantially better sequential read/write performance. That wasn’t the case and that is rather unfortunate as it really muddles things.

Why is this the case? We honestly don’t know, but our assumption is that the Realtek RTS5762DL controller is the 4-channel variant of the Realtek RTS5762 8-channel controller. So, things have been disabled and you aren’t getting the fully featured controller. When things get disabled it impacts various areas of the chip design and usually requires firmware adjustments as a result. The Realtek RTS5763DL used on the Swordfish is a true 4-channel controller, so it is using everything the controller has to offer.  Both use the PCIe 3.0 x4 interface. ADATA is looking at possible firmware updates on the Falcon to improve performance in PCMark 10. If one is released we’ll be sure to update our numbers and link to them in this review.

Legit Bottom Line: The ADATA Falcon is the big brother of the ADATA Swordfish, but doesn’t beat it across the board despite costing more.