Last week, Legit Reviews took an in-depth look at the ADATA Swordfish 1TB NVMe SSD and found it to be a pretty good entry-level drive for the PCIe Gen 3.0 x4 M.2 2280 NVMe SSD market! Today we are going to be taking a look at the ADATA Falcon 1TB NVMe SSD, which uses a more powerful Realtek RTS5762DL 4-channel controller with the same exact 96-layer BiCS4 3D TLC NAND Flash memory.

The ADATA Falcon is rated at up to 3100 MB/s read and 1500 MB/s write for sequential read/write performance whereas the ADATA Swordfish is rated as having up to 1800 MB/s read and 1200 MB/s sequential write speeds. Both the ADATA Falcon and ADATA Swordfish series drives top out on Random 4K read/write with speeds of up to 180,000 IOPS. The ‘better’ controller is the reason the drive has faster performance ratings, but it is is also the reason it it slightly more expensive. The ADATA Falcon remains a DRAM-less solution, so we’d classify both the Swordfish and Falcon as entry-level NVMe SSDs.

The ADATA Falcon NVMe SSD series is available in 256GB, 512GB, 1TB and 2TB capacities with pricing starting just above the Swordfish series. For example the Falcon 1TB drive is $129.99 shipped whereas the ADATA Swordfish 1TB drive is priced at $114.99 shipped. So, you are looking at an extra $15 to move up to a Falcon drive at this capacity.

Since the ADATA Falcon is a DRAM-less solution, the drive will use the Host Memory Buffer (HMB) feature in Windows 10 to procure 65.5 MB of your system memory for the SSDs translation tables. This helps lower the cost of the drive, but it is slower than having dedicated DRAM directly on the SSD. The ADATA Falcon also supports LDPC (Low-Density Parity-Check) error correcting code technology and AES 256-bit encryption. 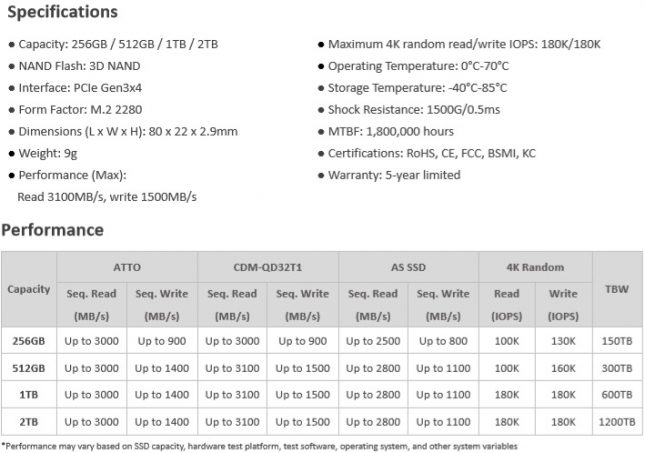 ADATA sent over the Falcon 1TB for us to test on our AMD Ryzen X570 platform since it is the most popular drive size right now for the DIY market. The retail packaging looks great with full color packaging that will catch your eye in a retail store. 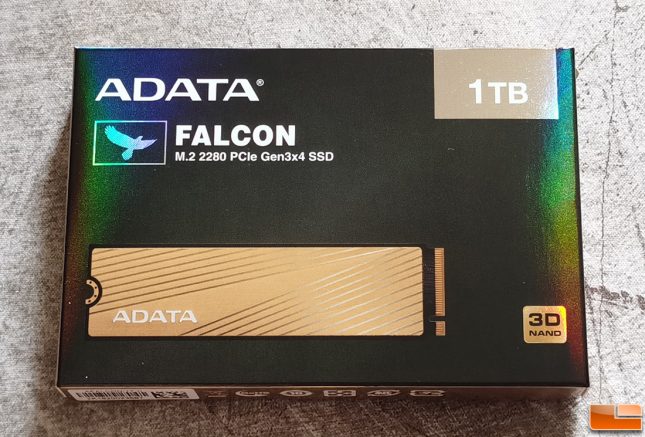 Inside the box you’ll find the Falcon NVMe SSD and nothing else. You’ll need to use the screw supplied with your motherboard purchase or the possibly already in the standoff in your laptop. The Falcon 1TB drive is a single-sided PCIe Gen3x4 NVMe SSD, so there are only only components on one side of the drive.

Like the Swordfish drives, the Falcon series comes clad in an aluminum heatsink, but this time around it is gold in color. The metal heatsink has an artistic pattern etched in it along with the ADATA logo. The heatsink does add some thickness to the drive, but at 3.85mm it should still fit in most all M.2 2280 slots without issue.

There are no components located on the back of the ADATA Falcon 1TB drive, so all there is to talk about is the product label. This label contains the model number, serial number and usual regulatory information from RoHS, CE, FCC, BSMI, KC and so on.

Purchasing the ADATA Falcon will also allow you to access two pieces software that are given out for free with the hopes that it will improve your user experience. The first is the ADATA SSD Toolbox Utility and second is the Acronis True Image HD disk migration utility. The SSD Toolbox gives you insight into SSD health and allows you to ensure it is running as good as it can be while the other allows you to easily clone drives. Both of these pieces of software are free, but are very useful. 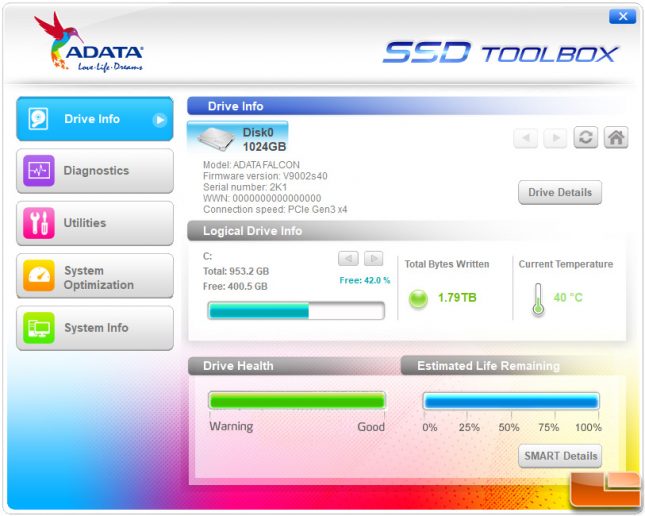 Let’s take a look at the test system and get to the benchmarks!