To test the SuperSpeed USB 3.0 connection on the ACER Aspire Switch 11, we used a Kingston HyperX 120GB SSD and a Thermaltake BlacX 5G dock to perform the benchmark. 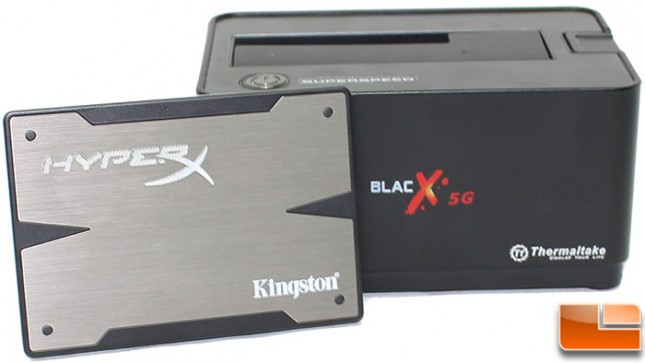 CrystalDiskMark 3.0.4 is a great little benchmark that gauges the performance capabilities of a storage device.  It is an industry standard, and many drive manufacturers will use this benchmark to test their drives.  It provides a benchmark of Sequential and Random read/writes with a queue depth of 32. 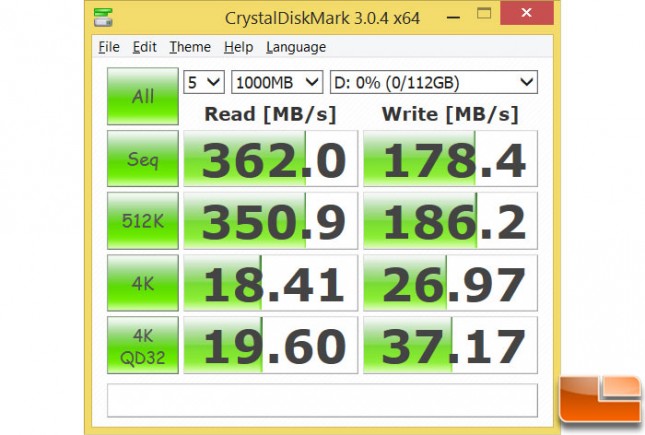 The Kingston HyperX 120GB SSD is rated for 555MB/s Read and 510MB/s Write speed.  Using the Thermaltake BlacX 5G, while connected to the SuperSpeed USB 3.0 connection on the tablet, we recevied a 362.0MB/s read speed and 178.4MB/s write speed.  This seems to be a big drop in performance from the rated speed to the USB 3.0 connection.  I did the same test on a Gigabyte Z97-MX Gaming 5 system and received similar results.

Testing the integrated MicroSD slot was done using the SanDisk MicroSD card that came with the SanDisk Connect 64GB Wireless Flash Drive that Legit Reviews took a look at in February 2014.  When testing the MicroSDXC card, we found that it performed rather well for a MicroSD card with a 93.50MB/s read and 60.38MB/s write speed using a Kingston MobileLite G3 over a SuperSpeed USB 3.0 connection. 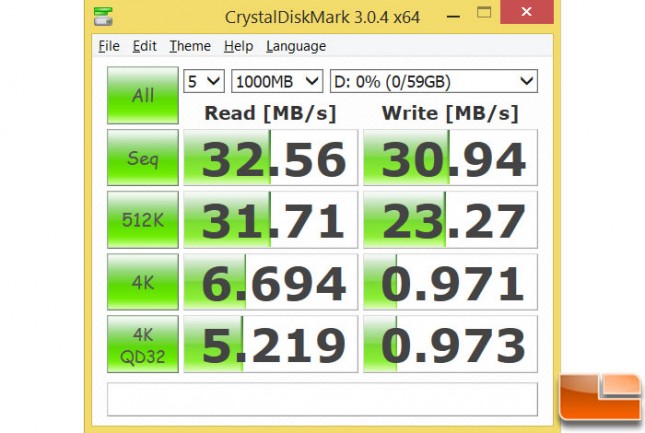 Using the integrated slot, we found that it doesn’t perform as well as it could.  The integrated MicroSD slot looks to be connected to a USB 2.0 header as that’s what the speeds indicate.  Testing the same card with the Kingston MobileLite G3 on the SuperSpeed USB 3.0 port, the card topped out at 90 MB/s read and 59MB/s write since it was limited by the USB 2.0 interface.