The XFX Radeon R9 290 Double Dissipation video card has the fan set to run at 45% at full load and while the GPU hums along at 93C we found that VRM1 gets extremely hot. In fact, we found that it would hit 128C and throttle. This means we’d be playing a game title like Crysis 3 with silky smooth framerates and then all of a sudden AMD PowerTune 2.0 would detect that VRM1 was overheating and it would decrease the GPU core clock speed from 947MHz down to 300MHz for 3-4 seconds at a time, which is essentially the cards 2D clock speeds. When this happened the framerate would go from ~40 FPS down to just 6-8 FPS and it would ruin your gaming experience.

We contacted AMD about this issue and they said that the card was behaving as it should when the GPU is in a very hot thermal state. Basically, PowerTune 2.0 is dropping the clocks to cool down the GPU. After searching the internet a bit we also found a thread on [H]ard|OCP that was four pages deep with people concerned with high VRM temperatures on this exact card.

We went back to the test bench and used GPU-Z to log what happened when we played Crysis 3 for an extended period of time. 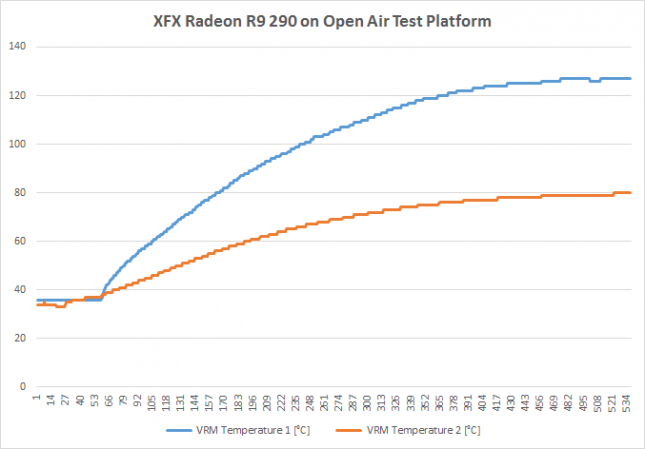 Here is what the GPU-Z log shows for VRM1 and VRM2 temperatures for when we played Crysis 3 for around 8 minutes. The GPU was pegged at 93C, VRM1 hit 128C and VRM2 peaked at 81C. These are very high temperatures! 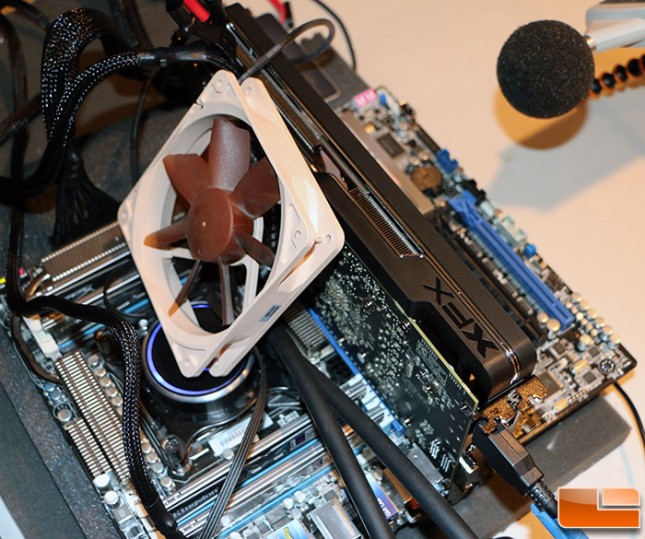 Our open air test system isn’t ideal when it comes to having good airflow, so we placed a Noctua 120mm cooling fan (NF-S12B FLX) behind the card to dramatically increase the air blowing across the back of the card. 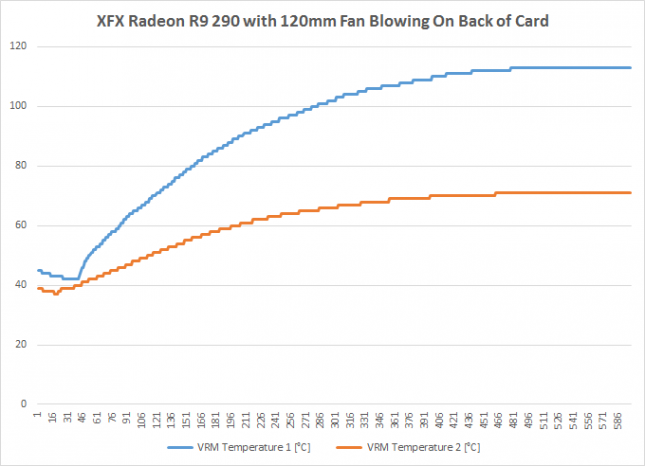 The result of adding a single 120mm fan behind the card dropped the maximum VRM temperatures down to 113C on VRM1 and 71C on VRM2. This was enough to keep VRM1 from overheating and having AMD PowerTune kick in and drop the core clock down to 2D idle clock speeds in order to reduce the temperatures for a bit. So, in a case with good airflow this shouldn’t be an issue. That said, we don’t like seeing VRM temperatures over 110C. The GPU temperature was still pegged at 93C with the fan on the back during this log. 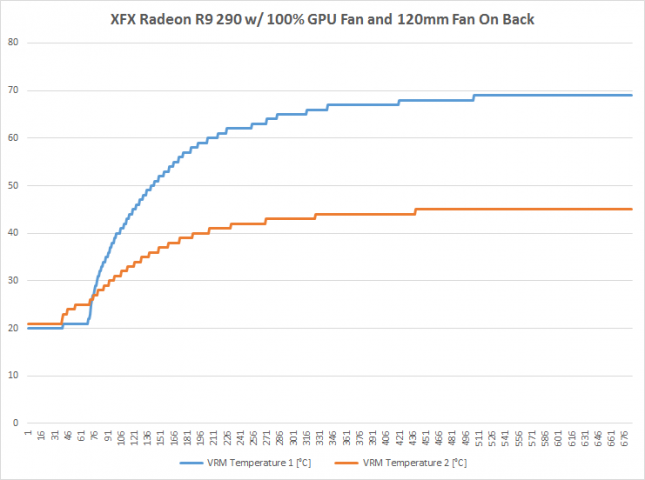 We used EVGA PrecisionX to set the GPU Cooler fans to 100% and left the Noctua 120mm fan blowing across the back of the card to see what would happen to the VRM temperatures when gaming. We were pleasantly surprised to find that VRM1 hit 69C and VRM2 topped out at 45C. The GPU temperature of the card leveled out at 61C and never went any higher during our quick gaming session. It is clear from our testing that XFX too conservatively set the fans on these cards and while the Double Dissipation cooler is super quiet, it lacks the airflow needed to keep VRM1 cool in low airflow chassis and for those looking to run these on an open air system. This is a key bit of information for those looking to for cards to do a litecoin mining setup. If you are running this card at 100% load 24/7 you will most certainly want to register for the lifetime warranty as you are really going to be putting this card to the ultimate reliability test!