Legit Reviews has never benchmarked physical drives with Everest Disk Benchmark before, so we figured now is a great time to start including it. This benchmark is designed to measure the performance of storage devices including SCSI and ATA hard disk drives, RAID arrays, optical disk drives, Zip disk drives, flash memories etc. All of the used benchmarking methods used in Everest are synthetic tests, and so they may not reflect the real-world performance of the tested storage devices. None of the used benchmarking methods include any manufacturer specific optimizations, and they never change the operating conditions upon the detection of a specific storage device model. EVEREST Disk Benchmark Version 2.06.37 was used for testing.

Benchmark Results: The Super Talent UltraDrive ME 64GB SSD had a linear read of ~200MBps across the entire drive. When it came to the Random Read test the drive scored 211.6MBps and then with a buffered read it reached an average of 232.3MBps. The average random access was again shown to be 0.10ms, which is just like what HD Tune and HD Tach showed in the previous benchmarks. 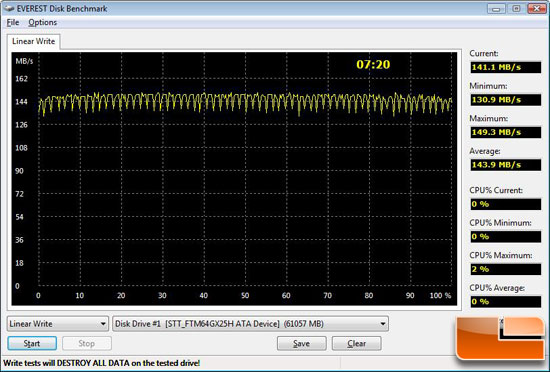 Benchmark Results: The linear write test is designed to measure the sustained linear (sequential) writing performance of the drive by filling the whole surface of the device with data. The Super Talent UltraDrive ME 64GB SSD showed really good performance doing this write operation and the performance was pretty solid across the drive. The average write speed for this benchmark using 128KB block sizes was 143.9MBps. 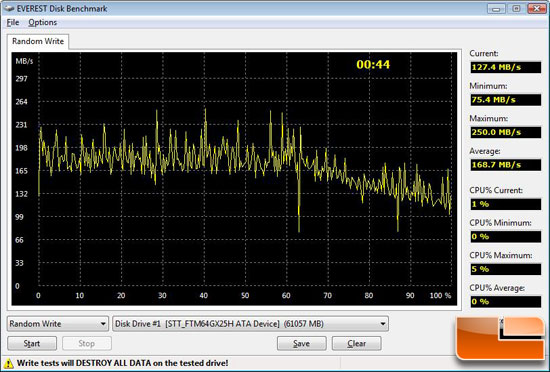 Benchmark Results: The random write test is designed to measure the random writing performance of the drive by writing 64KB data blocks to random locations on the surface of the device. The Super Talent UltraDrive ME 64GB SSD averaged 168.7MBps for this task. 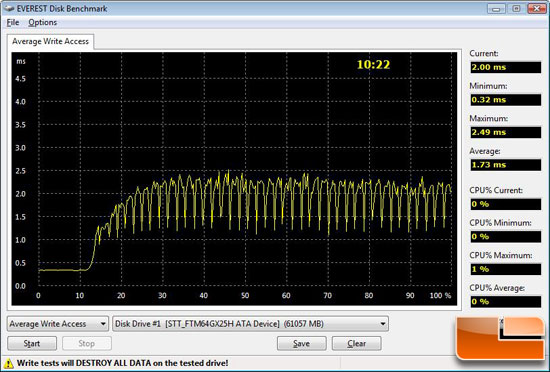 Benchmark Results: The final write test that was run was the random access test, which is is designed to measure the data access performance of the drive by writing small data blocks to random locations on the surface of the device. The Super Talent UltraDrive ME 64GB SSD hard drive had an overall write access time came out to be 1.73ms. The fact that the latency increased about 13% percent through the benchmark seemed strange, but this is exactly what we saw with the OCZ Vertex 120GB when we benchmarked that drive.