Today we’ll be testing 3 Aspects of the included fans:

The Testing Equipment that I will be using was purchased by me. It includes:

For the testing, I will be using one fan at a time, then I will
test both fans together. I will be using my Tenma sound meter sitting
inside the case then convert the measurement to a 1 meter distance. For
the 200mm fan I will use a duct to help measure airflow as my normal
setup is designed for 80, 120, & 140mm fans.
Temperature used
for testing is an artificially created one, designed to simulate a
system at load, which would increase the internal case temp beyond that
of the ambient room temp.

Let’s see how these fans do now: 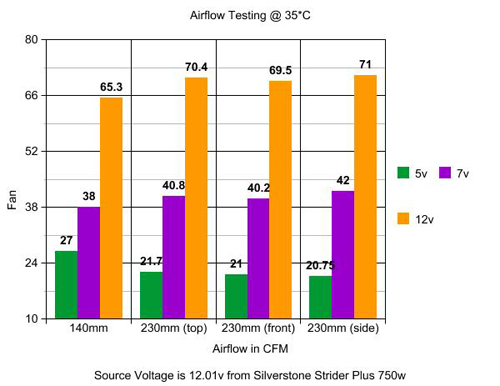 Well,
here’s a nice surprise of the fans of the case. Unfortunately, I was
not able to test using the built in fan controller, though it’s easy to
note here how well these fans do.

Overall, Rosewill did a good
job on fan choice; the intake and exhaust level of this case is balanced
well and it has substantial airflow as well.  It’s very nice to see
such airflow used in a case of this size as it helps eliminate dead
zones where heat pockets can form. 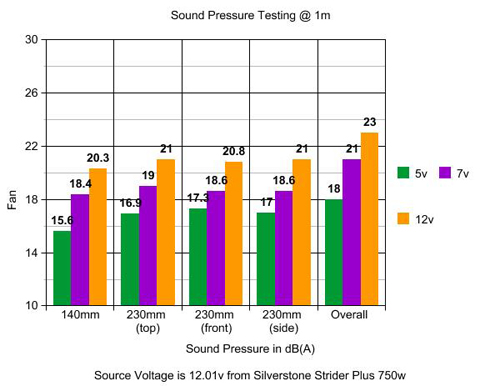 Moving
on, we have the sound pressure results from the Thor. To say I was a
bit floored is an understatement. The fans used in this case are fairly
quiet. Lots of airflow and very little noise from this guy when the fans
are operating in open air.

A bit of a subjective input here:
when installed in the case, the amount of fan grills present on the
front of the case (3 total) cause a bit of extra noise from the Thor as
you can hear the air pulling itself through the obstructions in its
path.

Still, this is a quiet case overall and would not distract you while in use even if you don’t use a fan controller.