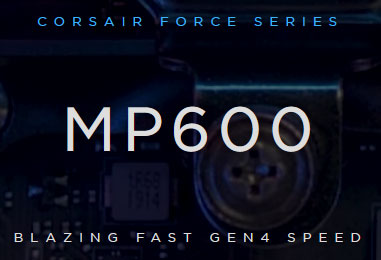 From our testing today we found that the PCIe Gen 4 equipped Corsair Force MP600 can read and write sequentially at speeds that cannot be touched by a single PCIe Gen 3 drive. It’s subtle looks and aluminum heatsink check all of the boxes that enthusiasts ask for from their high speed storage. Corsair has a great package here and have them available on the launch day of AMD’s Ryzen 3 and X570 motherboards. If you are fortunate enough (or unfortunate, depending on your level of tech addiction) to have a Microcenter nearby, you can pick this drive up today!

This drive competes on a completely different level than existing Samsung M.2 drives, but at a similar cost. Unfortunately, cost is where things start to get complicated. For our test today we used a bargain drive to compete against Corsair’s finest. It has no heatsink and the warranty isn’t as long, but it does provide an interesting alternative. For the $249.99 that the Corsair Force MP600 costs, users could save $50 and get two of the Inland Premium 1TB drives to combine in RAID 0 (if you have a motherboard that supports such a configuration) which would perform similarly or even better than the Corsair Force MP600. Now we will admit that RAID 0 opens up a whole lot of other things to consider, it is certainly not for everyone, but for some it may be a viable option.

Another thorn in the side of the Corsair Force MP600 is that the drive is not noticeably faster in day to day operations. You are not going to experience WoW or Battlefield loading faster on the Force MP600 than on a drive based on the Phison E12 controller like the Inland Premium we tested here. It is a wonderfully fast SSD, but most users would be better served by a less expensive drive. You either want this drive due to it checking all of the important boxes at an enthusiasts level, or you have a specific use case such as photo editing large files or 4K video editing, where time saved is money.

Perhaps this increased storage performance will help to drive adoption of higher speed networking equipment to a more mainstream level. A single user has had the capability to saturate a 10Gb/s link during large file transfers for some time now. With the introduction of PCIe Gen 4 drives like the Corsair Force MP600, we now have the capability to fully saturate a 40Gb/s link, provided you have a pair of them on both ends!

With all of the above caveats out of the way, it does not change the fact that the Corsair Force MP600 is the undisputed speed king at Legit Reviews. It is the fastest drive we have tested for sequential transfers to date by a wide margin. It absolutely screams at large transfers. Blazing fast indeed!