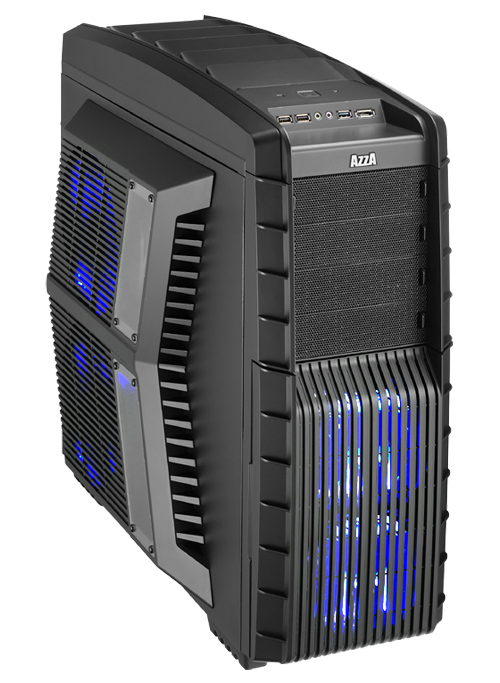 Today Legit Reviews takes a look at a new case from Azza, the Hurrican 2000. Aimed toward gamers, the Hurrican 2000 is designed from the ground up to house the “ultimate gaming rig”. With the amount of features and a very nice price tag, it could very well be what you’re looking for. Read on to take a look at this $95 chassis and see if it has what it takes for your next system build! 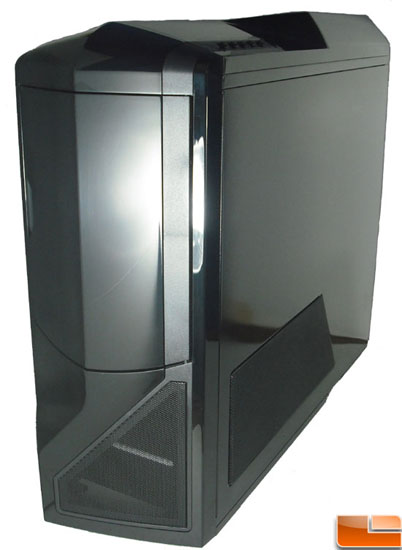 NZXT has been building cases for the past six years, but this summer the company said they would release their most elegant and intelligent chassis design to date with a new full tower called, the Phantom. The Phantom has 7 fan cooling options, 7 storage drives, room larger video card, support for E-ATX motherboards and even has a fan controller for up to five fans! Not a bad feature list for a case that runs around $145 shipped.

Today we get to look at the newest case from Antec, the LanBoy Air. The LanBoy Air is a fully-modular case that can be customized 34,800 ways. The LanBoy Air sports unprecedented top-to-bottom mesh construction for extensive air ventilation and includes five 120 mm fans and space for a total of 15 cooling fans! So join us as we look at this newest offering from Antec. 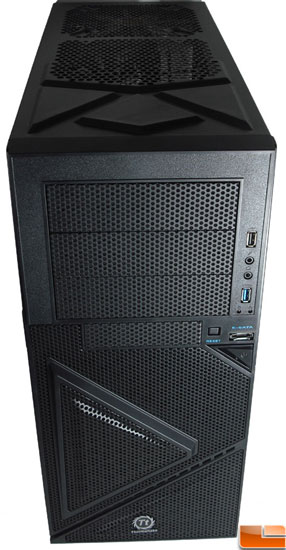 The Thermaltake Armor A60 case is clad in black from the inside to the outside and has a tough look to it. The Armor A60 had the world’s first SideClick EasySwap design for 3.5” HDD when it came out. Read on to see how this $90 mid tower case that is directly aimed at the PC gamer and enthusiast crowd does when we build a system inside it!

Today Legit Reviews takes a look at a case from a relatively unknown company, Sentey. They went ahead and sent us their newest case offering in their Extreme Division, the Arvina. The Sentey GS-6400 ARVINA PC case has been developed to provide extreme cooling performance, so it should be interesting to see what they did differently from other companies. Read on to see how it does and if has the ability to earn a spot on your desk. 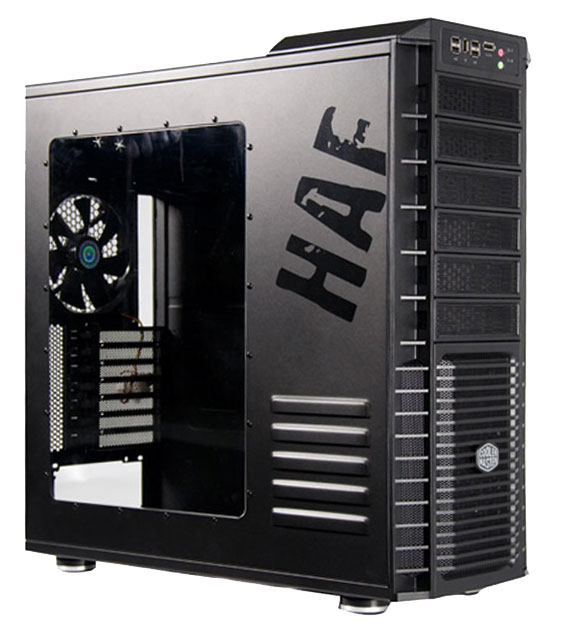 Cooler Master sent Legit Reviews one of their newest releases, the HAF 932 Black Edition. With the same features as the original HAF 932 along with a few new ones, we take a look at the newest addition to the HAF 932 line and see what Cooler Master has done different with this bad boy. 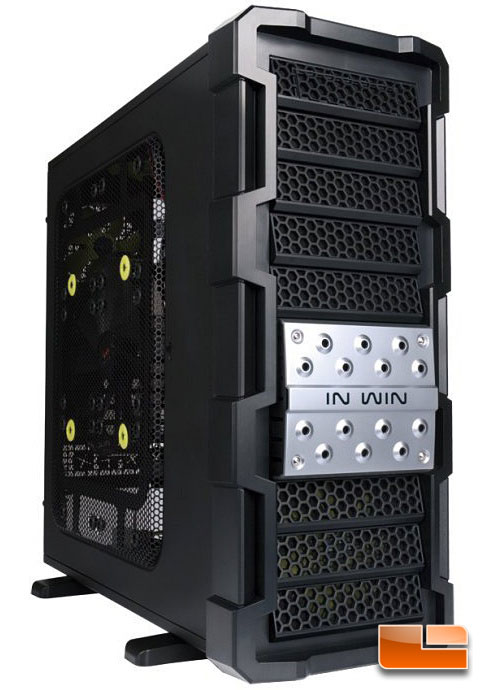 In-Win recently released their newest extreme case from their Destiny series, the Ironclad. With a “Warship” designed theme and the option to install up to ten 120mm fans it looks armed and ready to take on the latest PC components. Ironclad is built to accommodate a wide range of motherboards from Micro ATX to extended ATX. Read on to see if the Ironclad has what it takes to be the case for your gaming PC! 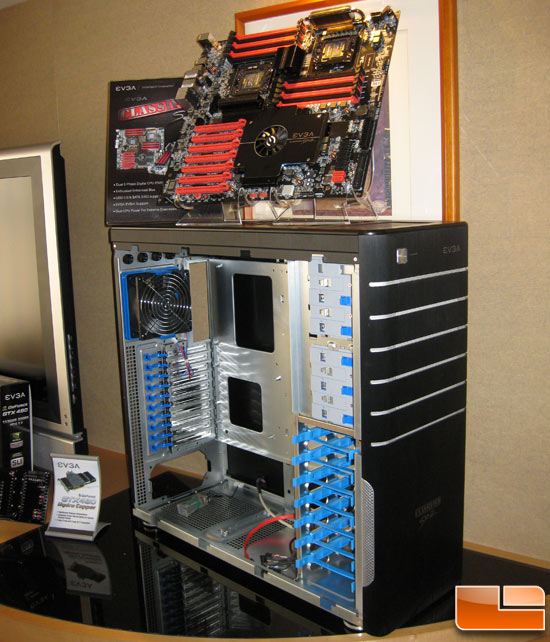 We had a chance to stop by and meet with EVGA at Computex 2010 and found that they are showing off their first ever PC case! The case doesn’t have a name yet, but it has been developed to properly enclose their massive $599.99 EVGA Classified Super Record 2 (SR-2) motherboard. we have pictures from both of the original case prototypes that are a must see.

Corsair is showing off a bunch of products for the very first time this year at Computex 2010 here in Taipei! One of the most interesting is their first case in the Graphite series that will be called the 600T. The Corsair Graphite 600T is a mid-tower PC case that is due to come out to the market later this summer for right around $150. Corsair also shows off fully modular power supplies and brings LED memory lights back from the dead with Airflow Pro.

Today we look at the newest addition to Cooler Master’s HAF lineup, the HAF X. The HAF X is Cooler Master’s new flagship case for the HAF series, thus replacing the popular HAF-932 as the top dog. So join us as we see what Cooler Master has done to improve on the already impressive HAF lineup. 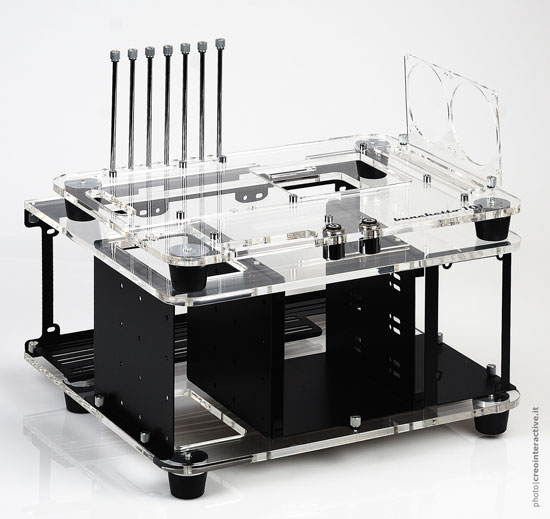 Today we look at a PC chassis from Mircocool that is aimed at the hardware tweaker in all of us. The Banchetto 101 is an open air modular chassis that not only supports normal PC components but water cooling as well. Open, light and transparent, its innovative structural design enables easy access to all components of the system and allows rapid substitutions and total real-time monitoring. Join us as we see how easy the Banchetto 101 really is to use.

Antec offers several models in the Sonata family of cases which have been very popular with enthusiasts and casual builders alike. Long respected in the business of building cases, Antec is proud to offer one of their newest mid tower Sonata models named the Sonata Proto. Read on to see if Antec has another best seller on their hands.

Today we are looking at a brand new micro-ATX case in NZXT’s crafted series, the Vulcan. The Vulcan is a mATX case intended for enthusiasts and is said to be 40% smaller than the traditional ATX full tower, yet can still accommodate a full length video card and up to a 6.5″ tall CPU cooler. Join us as we take a look at this new mighty mini wonder that is ideal for LAN gamers on the go!