For the first two products today, we have two of NZXT’s newest entries to the cooling fan market; the FX Series of fans are Enthusiast grade products with Fluid Dynamic Bearings and high performance specs. With high RPM fans with huge static pressure and airflow ratings, NZXT’s looking to capitalize on those who need well built, high performing fans for their multi-GPU or CPU cooling solutions. The FX Series of fans specialize in Airflow & Static Pressure allowing them to maximize the cooling potential of any radiator or heatsink. The FX Enthusiast Series fans from NZXT come with 3 speed, dip-switch controls to adjust fan speed between low (5v), medium (7v), & high (12v) settings.

We’ll be looking at both the FX-120 and FX-140 models in today’s review, which is very exciting for me, as it’s one of the few 140mm fans to come out in recent years that actually uses a standard 140mm frame instead of a custom design. Likewise, the FX-120 from NZXT is one of the few performance 120mm fans to come out in recent years, as there has been a bit of a market shift to either cheaper construction and low speed or silent fans.

The FX Enthusiast Series of fans from NZXT comes with a 2 year warranty. The 120mm model is priced at $12.99 + Shipping. The FX-140 comes in at $14.99 + Shipping. Both of which are respectable prices considering the performance outlined by the label, and that they come with Fluid Dynamic Bearings.

NZXT’s FS Series is designed to offer the best Airflow to Noise ratio while maintaining its quiet profile. Recently, the 200mm model was updated to include 3 different models with 3 different LED colors. Red, Blue, & Green are now staples in NZXT’s FS Series lineup allow you to silent performance with a bit of added flare. These specially designed fans are designed to work with all NZXT cases that support 200mm fans. Due to its custom size, compatibility with cases that are not made by NZXT is not guaranteed.

Today we’ll be looking at the FS-200LB-RLED which is the red model from this series. While I didn’t pick this color out, red is one of my personal favorites and I am picky about how lighting looks, so I’ll be interested to see just how quiet this fan can get as well as how good its LEDs look.

The FS LED Silent Series of fans from NZXT ship with a 2 year warranty as well, and the FS-200RB-RLED comes in at $22 + $1.99 Shipping. The Blue LED model is $29.99 + Free Shipping, and the Green LED Model is $22.99 + Free Shipping. If you average the price to $25.66 shipped for one of these fans, then I’d say the value of them pre-testing is keeping me a bit in reserve. Considering their limited use with NZXT products only, and the fact that the bearing is only a Rifle Bearing, they may not be the best bang for the buck. I’ll leave that up to testing to decide, though. 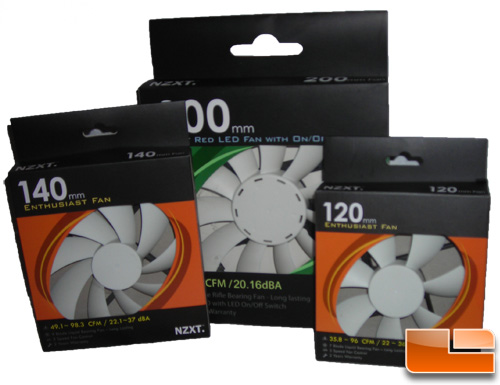