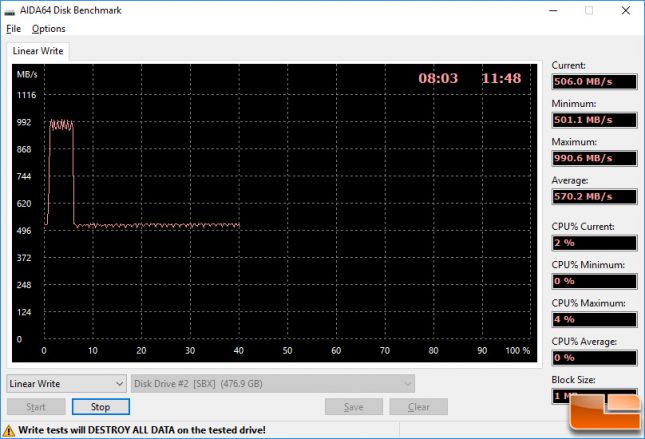 When you take a look at extended sustained write performance you’ll see that the performance started out at around 990 MB/s until about 6% of the drive was full. After that the performance of the SBX 512GB drive dropped down to around 505-510 MB/s. The slowest speed noted while writing over 200GB of data to the drive without any breaks was 501.1 MB/s and that occurred after all the SLC cache was full and data was being written directly to the 3D TLC NAND Flash. Not bad speeds as 500 MB/s is still scooting for sustained writes on a low-cost drive.

The MyDigitalSSD SBX series isn’t the fastest drive available, but certainly has respectable performance and finished in the top half of the drives that we have recently benchmarked. It finishes ahead of all the SATA III SSDs and finished ahead of some well known M.2 PCIe NVMe drives as well.