AMD released the 900-series of chipsets this morning at Computex 2011 to show the world that they are preparing for the upcoming released of the AM3+ processors by releasing platforms with the new AM3+ socket. This is an evolutionary change or progression of the socket AM3 infrastructure, which means that this new socket will be backward  compatible with existing AM3 processors. This is great news for existing AMD customers as you can upgrade your motherboard today well in advance of the Zambezi processors. So, the most important point of this entire launch is that the AMD 9-series of chipsets fully supports upcoming 8-Core AMD CPU’s thanks to the AM3+ socket. The socket change was needed since HyperTransport has been upgraded from version 3.0 to 3.1 as AMD needs to support 6.4GT/s for their new processor design. You always want to build on the platform that supports the next generation of products and this is it.

The other main feature for AMD 9-series is the ability for motherboard partners to purchase NVIDIA SLI licenses for these boards.  Since nothing ‘new’ has been done to chipset itself it would appear that NVIDIA has had a change of heart or the company simply wants more revenue. This is good news for everyone as many enthusiasts and gamers do use NVIDIA products and might have frowned on building an AMD system since you couldn’t run multi-GPU configurations on the AMD 8-series for example. With the new 9-series of boards you have that ability and that is something that might compel gamers to look back at AMD platforms. The only negative here is that the boards will cost a little more as the board companies are going to have to pay NVIDIA for the licensing rights and the ability to put that NVIDIA SLI logo on their box. 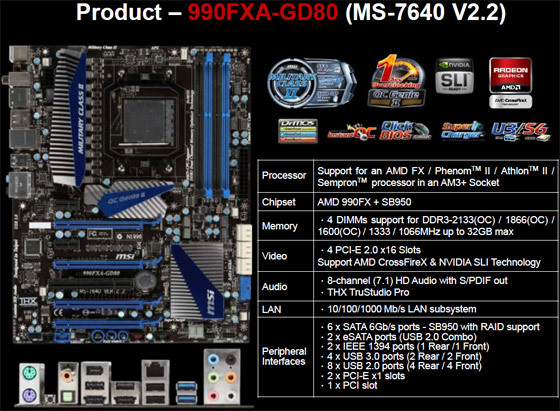 The MSI 990FXA-GD80 motherboard that we looked at today proved to be a very solid platform when using the AMD Phenom II X6 1100T processor. We don’t have any Zambezi processors yet, so we were unable to try out the Bulldozer architecture on this new platform. The whole point of this new chipset series is for the upcoming octo-core monsters by AMD, but sadly that will have to wait for another day.  The AMD 990FX performed on par with the 890FX chipset and that is exactly what we expected to see today as there really is no difference between the two. 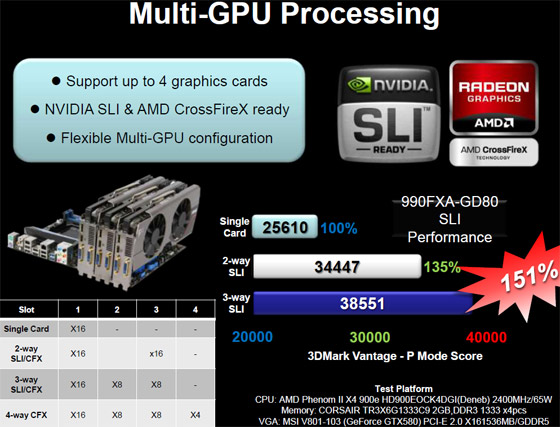 AMD is going to cringe when reading this paragraph, but the highlight of this article was the fact that we were able to get NVIDIA SLI up and running on the MSI 990FXA-GD80 motherboard. This is the first time in years that we have run SLI on an AMD platform and it felt really going having the ability to run both AMD CrossFireX and NVIDIA SLI. Gamers no longer have to build their PC around what video card configuration that they wanted as no they can pick the latest Intel or AMD chipset and know that both GeForce and Radeon HD graphics will work just fine. The MSI 990FXA-GD80 supports up to 3-way NVIDIA SLI and 4-way CrossFireX. 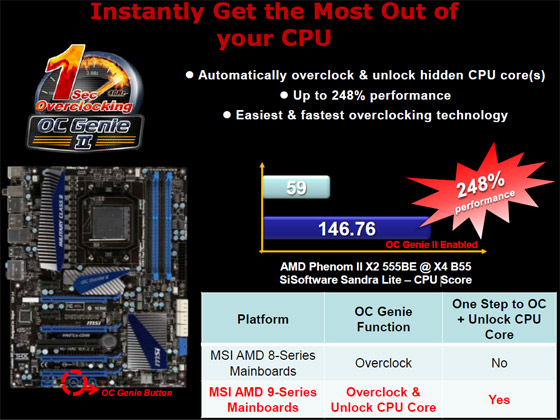 MSI has also continued to improve the components that they use on motherboards as well as update the software that is included with every motherboard purchase. On the MSI 8-series of boards you needed OC Genie & Unlock CPU Core software to get the most out of it and now all that has been rolled into a single piece of software called OC Genie II. MSI claims that you can overclock and unlock CPU cores (on certain processors) in just one second thanks to the OC Genie button found on the motherboard. With a processor like the AMD Phenom II X2 555 Black Edition you can press this button and the motherboard will automatically unlock a CPU Core and overclock it. Overclocking has almost gotten too easy as now anyone really can do it!

The performance of AMD 990FX chipset was on par with the AMD 890FX chipset that we compared it against. In benchmarks like 3DMark 11 & Sandra  we found no significant differences in performance between the two platforms. The same proved true in gaming performance when we tested games like Shogun 2, Alien versus Predator and Stalker. Since there are no architectural changes between the two chipsets we didn’t expect to see any differences and that was proven true by doing the testing. This makes for a ho-hum chipset launch, but like we’ve said a million times this chipset series is about supporting upcoming processors and that is it.

When we took advantage of the OC Genie II technology, the speed boost
given to the already fast Phenom II X6 1100T Black Edition processor was
only ~250MHz. While it’s not a huge boost, who am I to complain about
free performance. If you aren’t familiar with overclocking or are
hesitant to head into to the MSI 990FXA-GD80 system BIOS the OC Genie II
is a great feature to speed up your system. If you are an avid
overclocker, you most likely will never touch the OC Genie II except to
possibly unlock some “extra” cores on your dual or triple core CPU.
After we took advantage of the OC Genie II technology we wanted to push
the 1100T BE processor and see how far we could take it on the MSI
990FXA-GD80. We were happy to see that we were able to bring the Phenom
II X6 1100T BE processor from 3.3GHz to 4.3GHz on the MSI 990FXA-GD80 by
manually overclocking, which is where we have reached before with this
exact processor. So, when it comes to general chipset performance and what you can expect to reach when you overclock nothing has changed from the AMD 8-series to the 9-series of chipsets.

When it comes to pricing the MSI 990FXA-GD80 has an MSRP of $199 and the 990FXA-GD65 is $179. As always, AMD motherboards are fairly priced for the feature sets offered and AMD continues to have a very compiling price versus performance standing. The MSI 890FXA-GD70 is the previous flagship motherboard for MSI and it has an MSRP of $199, but can be found today for for $174 after rebates.  The MSI 990FX and 890FX boards might have the same MSRP, but the choice between the two is crystal clear in terms of future CPU support. If you don’t care about upcoming AM3+ processors then the 890FX will offer the same performance as an 990FX and will offer the best bang for your buck due to rebates.  Our suggestion is to go with the AMD 990FX chipset in order to have a platform that supports octo-core CPUs!

Legit Bottom Line: The MSI 990FXA-GD80 motherboard proved to be a solid performing platform, but it really needs AMD’s upcoming Zambezi processors to really show what it can do and those aren’t out yet!