AMD systems have always been known for their price to performance ratios. Unlike Intel who sells their top processors for more than a thousand bucks, AMD’s flagship processor retails for under three hundred bucks. The drawback to AMD systems was that you could only run Crossfire. Don’t get me wrong there is absolutely nothing wrong with Crossfire, in fact I have been running a pair of Radeon HD 5870’s in Crossfire for about a year now. The problem was lack of options if you wanted a dual GPU system. If you wanted to run a pair of NVIDIA GPU’s in SLI you were S.O.L.! 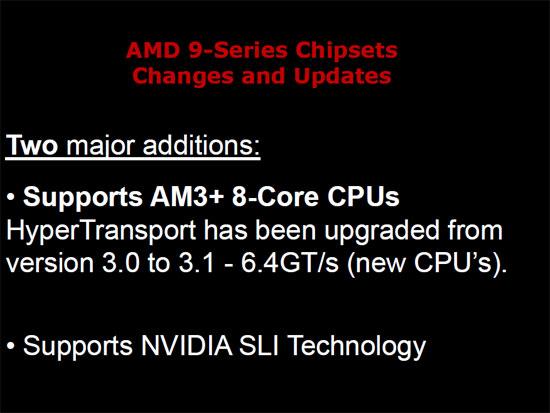 The MSI 990FXA-GD80 is going to be the first of what promises to be many AMD 990FX motherboards that will be coming across our bench. Due to the lack of Bulldozer chips out there right now (since they haven’t launched) we won’t be able to take full advantage of the AM3+ socket just yet. Though we will be able to play with the ability of NVIDIA SLI on an AMD system with out the use of hacked drivers. 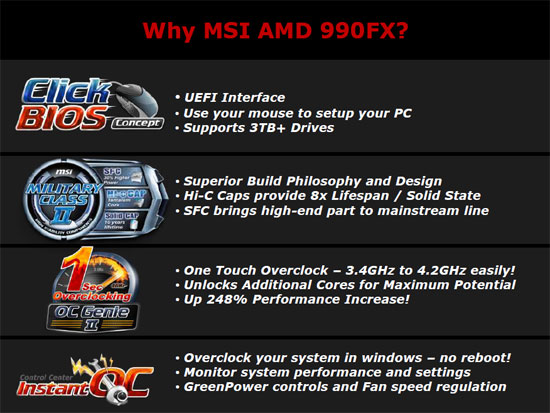 The MSI 990FXA-GD80 has a number of features that make it the board that it is. Click BIOS, Military Class II components, OC Genie II, and Instant OC from within Windows are all great features of the MSI 990FXA-GD80. 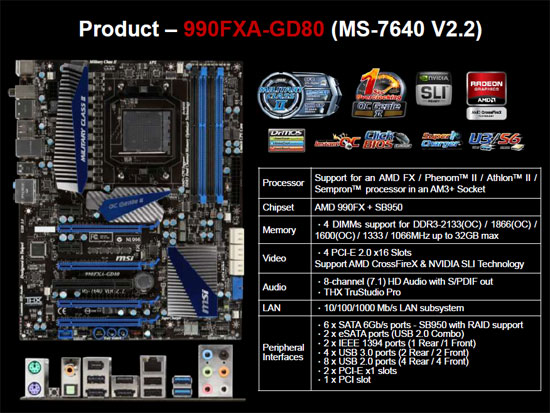 Taking a look at the Specifications slide for MSI, we can take note of a couple of key features. The first feature to really take note of is in the processors. The MSI 990FXA-GD80 supports all of the processors that we have come to love from AMD, the Phenom II, Athlon II, and Sempron series that are all in the AM3 Series of chips. Also included in the processor support is the new AMD FX series of chips. What we know about the new FX chips is limited at this point, but we do know that AMD is bringing out some 8-core processors! Once we get details on the new Bulldozer processors we’ll be sure to share it with you! The chipset on the MSI 990FXA-GD80 is the new AMD 990FX + SB950 which will support six SATA III 6Gb/s ports with RAID support. Of course since the new AMD 990FX chip supports NVIDIA SLI technology, MSI has made sure to implement it on their flagship board!

There are several more technologies of the MSI 990FXA-GD80 that we are going to be looking at today. So be sure to join us as we continue our tour on the next page where we look at the retail packaging and bundle!