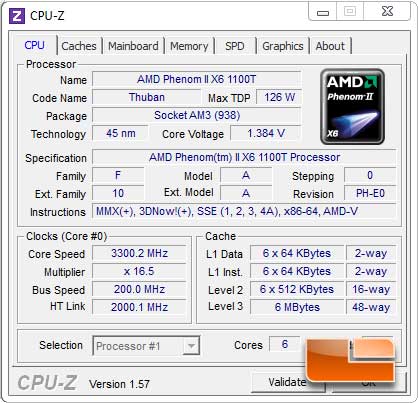 The AMD Phenom II X6 1100T Black Edition processor uses a 200MHz bus speed and a 16.5 multiplier to achieve the final clock speed of 3300MHz. Because this is a Black Edition Processor we will be able to increase the processor multiplier for our overclocking endeavor with the MSI 990FXA-GD80. 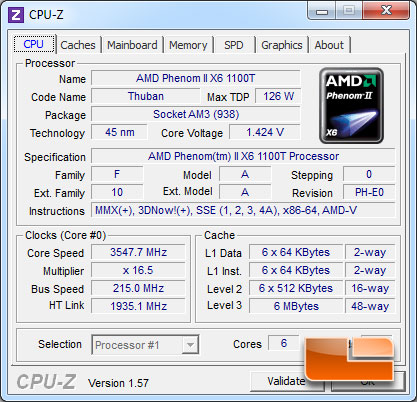 One of the features of the MSI 990FXA-GD80 is the OC Genie II. The OC Genie II is a one touch solution to overclock you system processor and unlock any potential “extra” cores. Since we are already running with a AMD Phenom II X6 1100T there is no potential to unlock some extra cores. Though the ability to overclock the system is definitely there! Shut the MSI 990FXA-GD80 down, depress the OC Genie II button, and fire the board back up, and we are done with that. The results aren’t that spectacular, though it’s better than a poke in the eye with a sharp stick. The OC Genie II brought the Phenom II X6 1100T from 3300MHz to 3547.7MHz. It is only a boost of ~250MHz but I can understand them playing on the conservative side. If wouldn’t look real good if the OC Genie II made processors go poof! 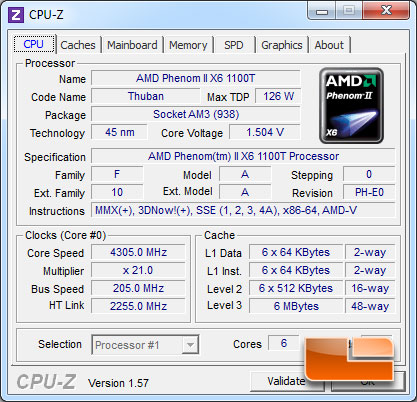 We obviously weren’t going to leave our overclocking session with out seeing how far we can push our Phenom II X6 1100T. After a little bit of time we were able to increase the multiplier to 21 and increase the clock speed to 205MHz. This gave us a final speed of 4305MHz for the Phenom II X6 1100T Black Edition Processor. It was surprisingly easy to hit this speed with the MSI 990FXA-GD80!