Video cards are easily the hottest component running in any system and typically their fans can be some of the loudest under load.   One way enthusiast address these problems is by switching from air cooling to water cooling, and Koolance has been helping them do this since 2000.  Their latest in that long line of cooling products is the VID-NX580 full cover GPU water block that Koolance sent over for us to test. 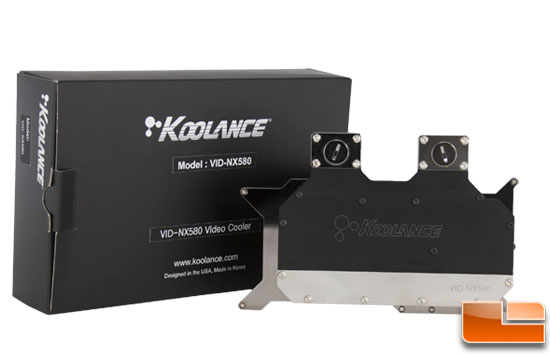 Koolance realized that there was a set of serious enthusiast that wanted to both push their equipment hard while maintaining near silence.  Koolance has become well-known for innovation with the world’s first professional PC external system, the Exos, that we reviewed here back in 2005.  From there they expanded into fittings, radiators, reservoirs, pumps, monitoring equipment, and cooling blocks for CPU’s and GPU’s.

Today the market has changed significantly from those early days back in 2000 when people were just starting to grasp the potential of water cooling your computer components.  You can grab yourself an all in one water cooling system for your CPU that is self contained and has decent components, and is only slightly more expensive than a good air cooling set up.  However, if you are looking to have an extreme system, a custom water cooling loop is the only way to go and that is where the Koolance VID-NX580 comes in.  This full coverage GPU water block is designed specifically for the NVIDIA GeForce GTX 580 / GTX 570 reference boards.  We found the Koolance VID-NX580 listed for $119.99 from several places on the web plus shipping with the best price being $119.99 Shipped from Amazon.