Intels NUC 9 Extreme Kit is a very interesting system that is aimed at gamers who are looking for a very small high-end desktop that supports upgradability. The original Intel NUC redefined he mini PC market nearly a decade ago by delivering a more than capable system in a tiny 4-inch by 4-inch box that was a mere 2-inches thick. The new Intel NUC 9 Extreme seems poised to redefine the gaming PC market by delivering full desktop-like performance and upgradability in a rather small device. Right now the availability of parts is low since the platform is brand new, so we can’t talk about future Compute Element modules, and what they will cost. Intel has already had a number of significant design wins with their Compute Element cards. Intel provided Legit Reviews with the following list of desktop solutions or chassis designs coming to market that are based around the Intel NUC Compute Element: 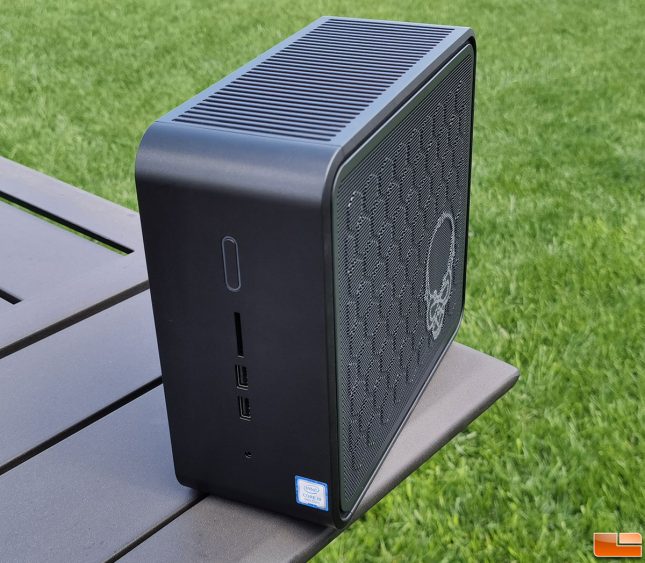 Our testing found the NUC 9 Extreme Kit was a very capable gaming solution that had no issues playing 1080P game titles as it was configured. This system has no issues playing AAA gaming titles at 1080P and 1440P with fairly high image quality settings. Running game titles on the NUC 9 Extreme Kit is also more than possible with thanks to how powerful the hardware is, but you’ll likely have to adjust the image quality settings as the GPU will be heavily taxed at 4K on AAA gaming titles.

It is impressive how Intel managed to fit so much into system and it looks like they have fully utilized the hardware inside as they are hitting thermal and power limitations. We didn’t even bother trying to overclock this system since it was already hitting thresholds in stock form. The noise level from the NUC 9 Extreme was certainly louder than we would have hoped and there were a total of six fans in the system we tested.

The NUC 9 Extreme Kit is priced around $1,700 a price that doesn’t include DDR4 memory, SSDs, a discrete graphics card or the cost of the operating system. All of those items must be purchased separately. The NUC 9 Extreme Kit that we tested was right around $3,000 and that makes it a pricey system. In fact it seems to carry a price premium over a pre-built traditional gaming desktops and comes close to the price of some of high-end gaming laptops. That will certainly limit who will buy one of these systems, but it will still be appealing to many due to the form factor. The Intel NUC 9 Extreme kit will likely get off to a slow start, but we hope Intel sticks with the design. It took nearly a decade for the Intel NUC to get to where it is at and we hope that Intel dedicates the same amount of time to get this series off the ground. Intel will need to establish the performance per liter category and that will take some time to do.

The NUC 9 Extreme Kit with the Core i9 processor is expected to become available for purchase at Intels channel partners next month. The more affordable Core i5 and i7 models are expected to arrive within the next three months.