The very first benchmark that we ran on the Intel NUC 9 Extreme Kit was Cinebench R20. This popular benchmark is free and gives useful performance information with regards to both single- and multi-core CPU performance. 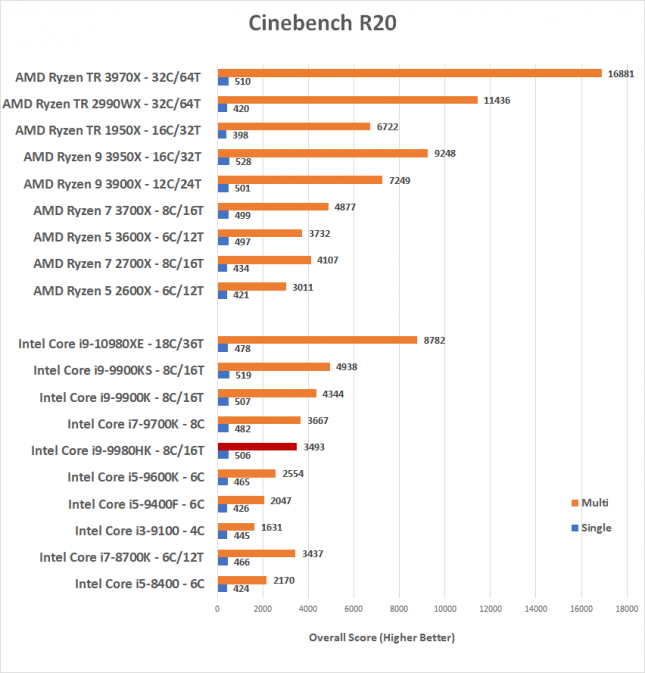 Just for fun we ran Cinebench R20 again, but this time with HWiNFO64 running in the background logging what was happening at a 500ms polling rate. 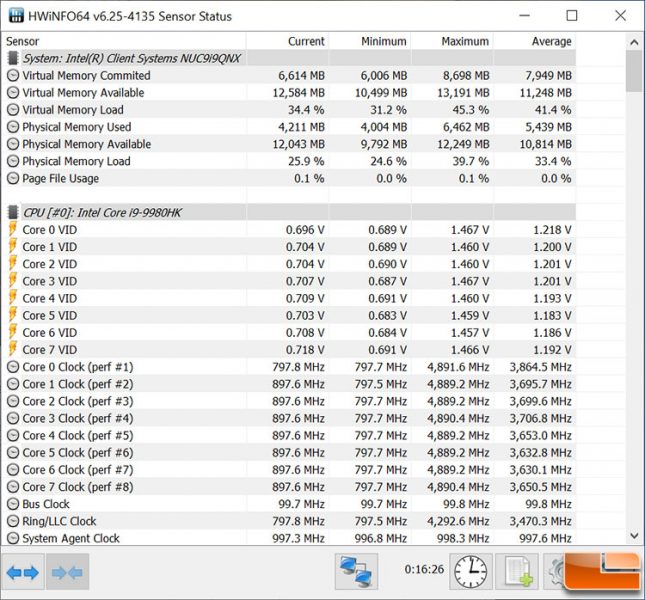 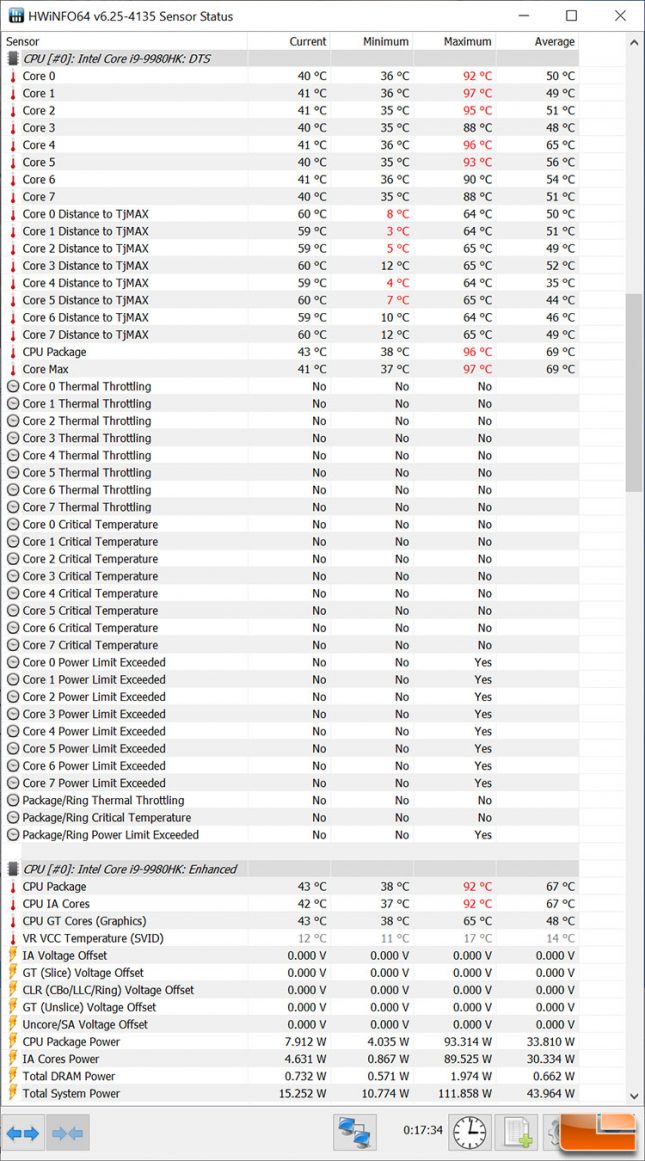 Things get a little more interesting on the temperature side as running both CPU benchmarks in Cinebench R20 seems to have pushed the thermal envelope of the system pretty hard. One of the physical cores reached 97C, which is 3C shy of the tJMAX temperature of 100C. All of the cores exceeded power limits at one point and HWiNFO showed that the Package/Ring power limit was exceeded during the benchmark. The good news is that no thermal throttling was reached on this benchmark. 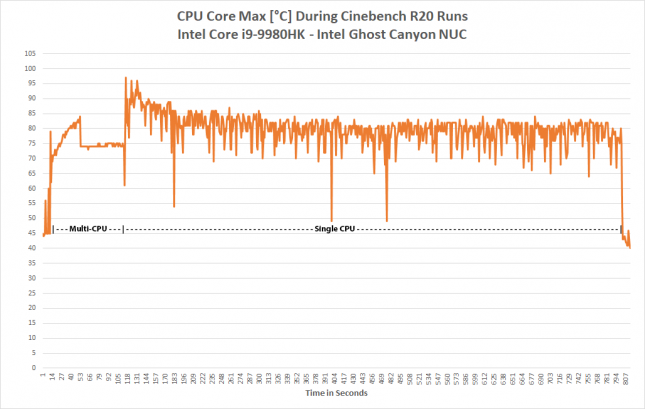 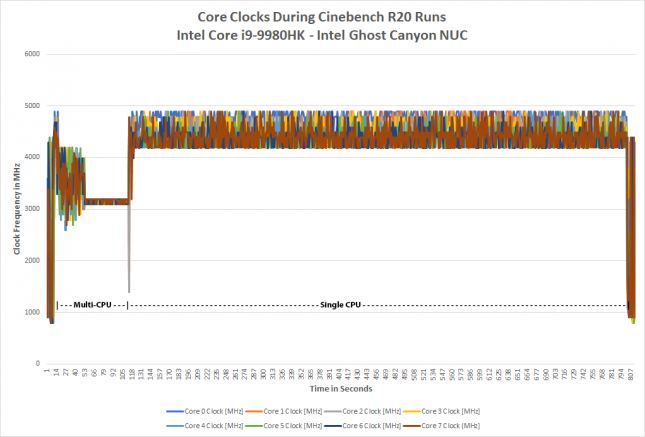 Taking a closer look at the core clocks we can see that the clock speeds of the cores dropped at the point in which the temperatures were lowered. The length of the turbo clocks of a platform are dependent on a wide variety of factors, but after some time it will drop to a clock that can be held for longer periods of time. On this device it looks like we hit around 4900 MHz when all cores are loaded for a brief period of time before falling down to more manageable 3100 to 3200 MHz. The Intel Core i9-9980HK processor is capable of reaching 5.0 GHz Turbo speeds, but we were not able to reach 5 GHz on this particular benchmark with a 500 ms polling rate. 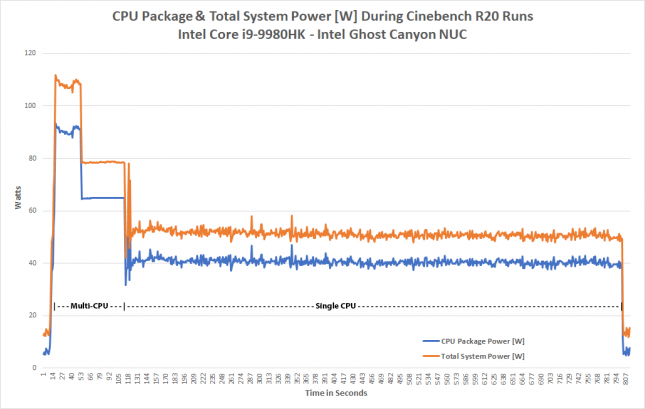 Here is a quick look at the CPU Package and Total System Power values from the data log. As you can see the multi-core CPU benchmark reaches up to 93 Watts on the CPU package. On the single-core CPU benchmark it never uses over 50 Watts and generally uses around 40 Watts of power. 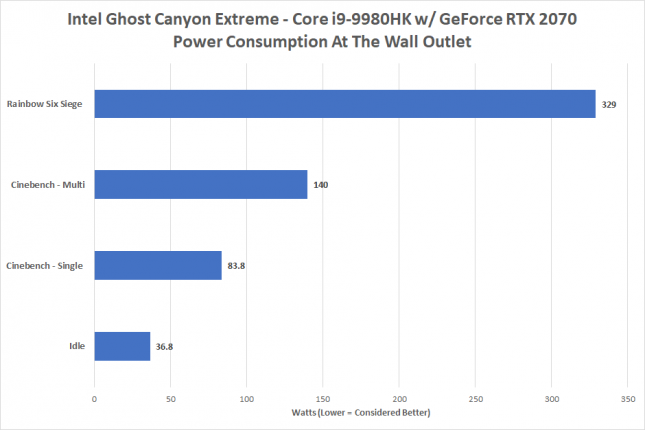 On our Kill-A-Watt power meter the system was getting around 36.8 Watts at idle. On Cinebench R20 we were hitting up to 83.8 Watts on the single-CPU workload and topped out at 140 Watts on the multi-CPU workload. During 1080P gaming we topped out at 329 Watts at the wall outlet. The fans of the system are audible once you fire up an application and run fairly loud during heavy use, but that is expected when you put a ton of high-end hardware in such a small chassis. You also have to keep in mind that there are six fans in the system; two on the top of the case, two on the Geforce RTX 2070 video card, one on the Compute Element and one on the 500W power supply.