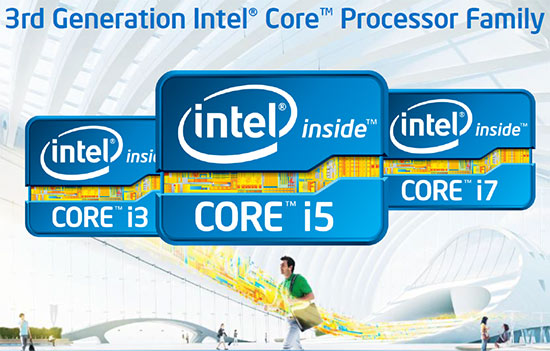 Last week Intel released its 7-series chipset family of products for notebooks and desktops using its current 2nd Generation Core ‘Sandy Bridge’ processors. The new 7-series chipset supports native SuperSpeed USB 3.0 and features Intel responsiveness technologies like Smart Response, Smart Connect, and Rapid Start. This morning Intel released their 3rd generation Core processor, which is codenamed Ivy Bridge. This groundbreaking processor was developed right here in America at the company’s facilities in Oregon and is the 22nm die shrink of the Sandy Bridge microarchitecture with some performance improvements and, more importantly, it is the first microprocessor to use Tri-Gate ‘3D’ transistor technology. 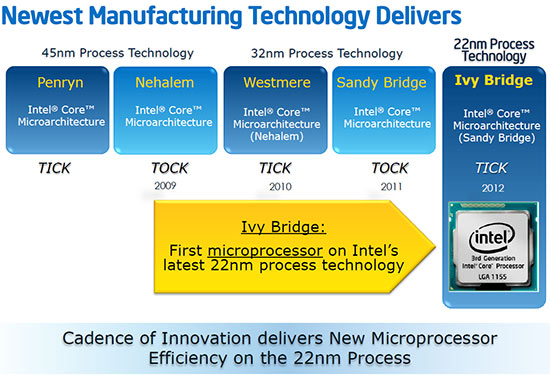 For Ivy Bridge, Intel’s researchers chose to remake the transistor and Ivy Bridge is the result of a decade of work and over a billion dollars of research and development money. Intel describes the new Tri-Gate transistor as a “silicon fin,” that rises above the chip to create a three-sided gate. The new structure enables more current to pass through when transistors are on and virtually none when it’s off, so it’s better for performance and power savings. The new Tri-Gate design uses less than 50% of the power as a comparable 2-d planar transistor. Intel says that due to this design the Ivy Bridge based processors are a good two- to three-years ahead of the competitors’ designs in terms of performance. This is because the Tri-Gate design boosts performance when needed and conserves power when none is required. This technology is great for desktop users, but Intel has clearly focused on power savings to strengthen their position in the mobile market as Intel wants a larger piece of the smartphone and tablet markets. 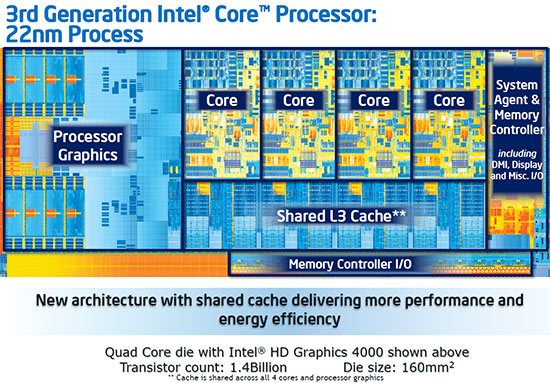 As we already mentioned, the Ivy Bridge processors are first mass produced processors that are built using the using a 22nm process. The benefits of this die shrink are fairly obvious; you get the ability to use more transistors and therefore get more processing power on a physically smaller area. The smaller the die size, the lower the cost as you can get more per wafer. The quad-core Ivy Bridge die with Intel HD Graphics 4000 has a transistor count of 1.4 Billion and a die size of 160mm^2. If you recall the quad-core Sandy Bridge die with Intel HD Graphics 3000 had a transistor count of 995 million with a die size of 216mm^2. This means that Ivy Bridge has 40.7% more transistors in a die size that is 26% smaller! The only downside of this is going to be heat as that is a ton of transistors to pack into such a small area.

The Intel Ivy Bridge processors will have a slight performance boost on the x86 CPU side, but it will be considerably better when it comes to the built-in graphics. Intel is said to have double the graphics performance with the introduction of Intel HD Graphics 4000. This means a better gaming experience, smoother playback of high-definition video and it will even perform better when editing pictures or video clips. Gamers that play at high resolutions or graphics intensive game titles like Skyrim or Battlefield 3 will still need a dedicated graphics card to reach desired performance levels. The vast majority of mainstream PC users should be able to use integrated graphics, though. It should also be noted that the graphics on Ivy Bridge will be able to handle multiple monitors setups, so you can run three simultaneous independent displays now without the need of a video card. 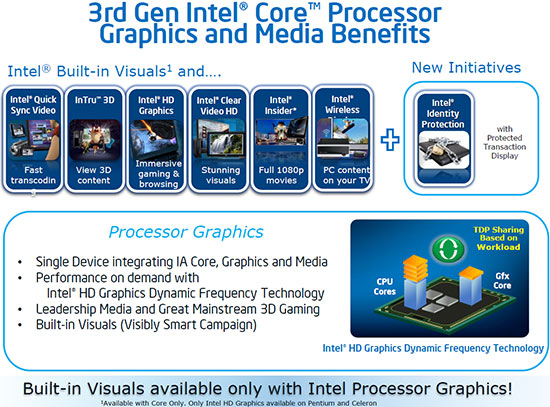 While we are on the topic of graphics, we should mention that Intel has completely reworked the HD graphics processor and has added more features and greatly improved performance! We are excited to tell you that all Ivy Bridge processors will support DirectX 11 and OpenCL 1.1 out of the box, without the need for a separate discrete GPU. Ivy Bridge processors will be available with two versions of the new DX11 integrated graphics processor: HD 2500 and HD 4000. 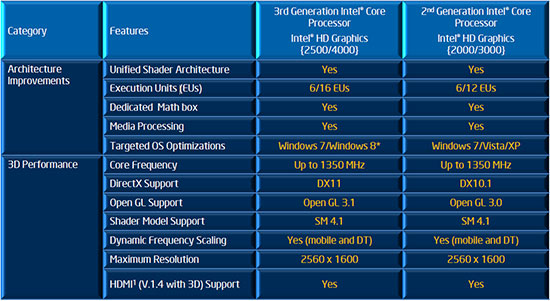 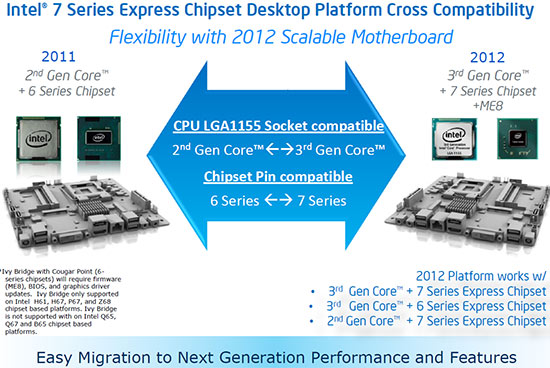 The best news about the Intel Ivy Bridge processors is that they are backwards-compatible with the Sandy Bridge platforms after a quick BIOS update on some of the motherboards. This means that nearly all Intel socket LGA1155 motherboards will be ready for the upgrade, if desired. 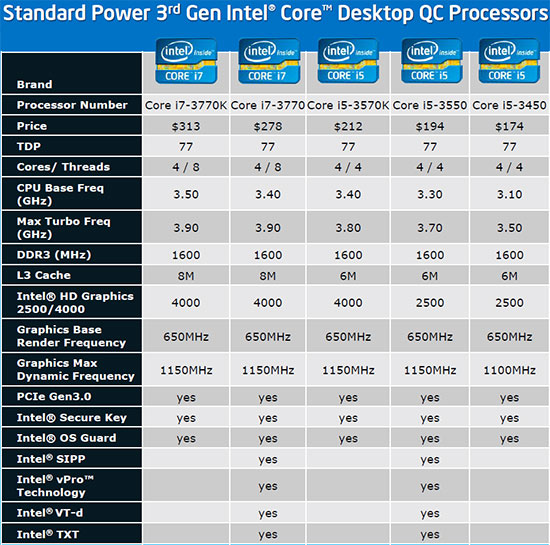 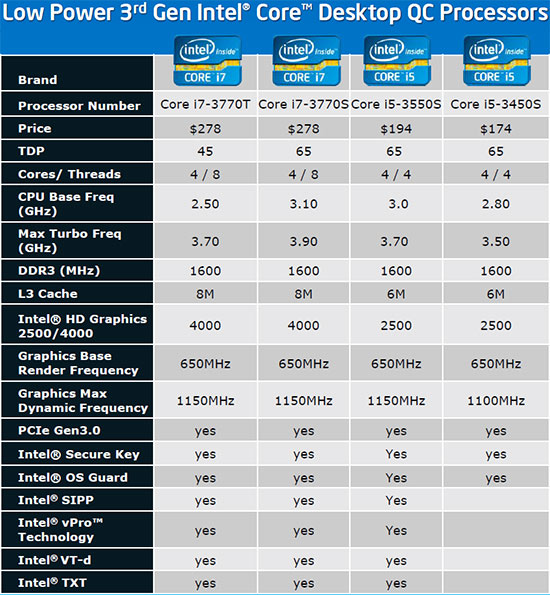 Intel is also offering four low power desktop processors with the Ivy Bridge launch that have TDPs ranging from 45 to 65 Watts.

Let’s take a closer look at the processor we will be reviewing today!