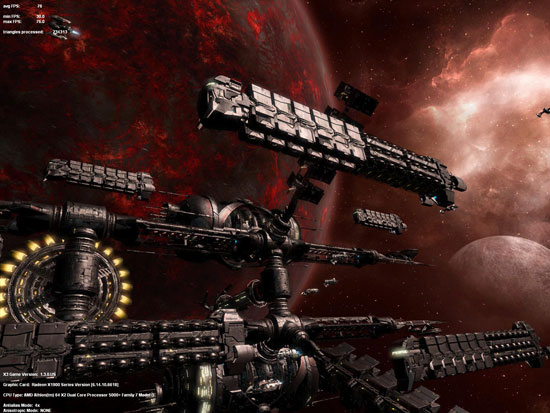 The Sequel to the award winning X3: The Threat will introduce a new 3D engine as well as a new story, new ships and a new gameplay to greatly increase the variety in the X-universe. The economy of X3: Reunion will be more complex than anything seen in the X-universe before. Factories are being built by NPCs, wars can affect the global economy, NPCs can trade freely and pirates will behave far more realistically.

Extensive development has gone into the X3 engine, making full use of DirectX 9 technology, to create dramatic visual effects and stunningly realistic starships. Coupled with the massively enhanced A.L. (Artificial Life) system, X3: REUNION will present players with an ever changing, evolving universe; where a player actions really can shape the future of the universe.

The X3 engine is really tough and we started off benchmarking at the default settings on both test systems.  With the quality settings both on high and no AA or AF we found that the Intel Core 2 Duo processor T7600 walks all over the T2600 CPU thanks to a 22 frame per second lead. This is a huge 44% increase in performance, but can it hold onto it at high resolutions?  Yes it sure can!  At 1920×1200 the Core 2 Duo was still leading the Core Duo by 11 frames per second, which is still a 24% increase. It seems like X3: Reunion and Comanche 4 both love CPU usage and helps show the power of Merom in a CPU intensive benchmark.