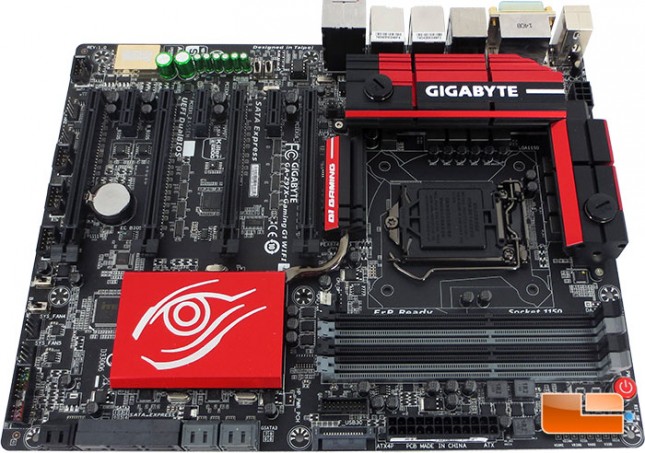 The GIGABYTE Z97X-Gaming G1 WiFi-BK is a pretty sharp looking motherboard. The blacked out look is pretty common as of late, but depending on the way it’s accented the look can be vastly different between to boards. The red accents on the heatsinks help bring enough color to the board without being overwhelming. 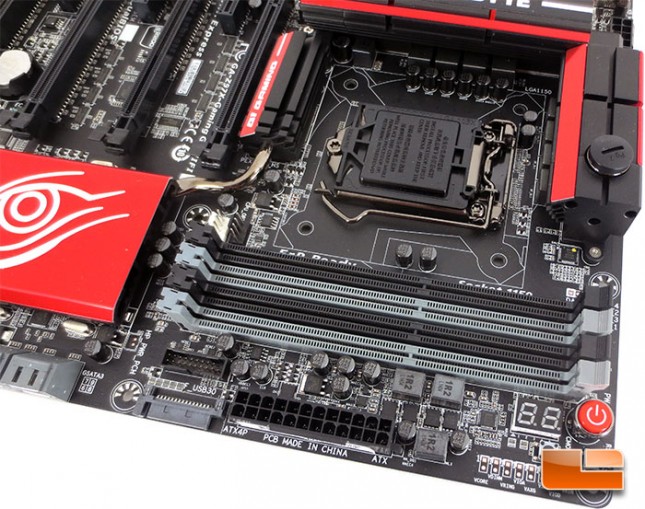 The GIGABYTE Z97X-Gaming G1 WiFi-BK is capable of supporting DDR3 at speeds up to and including 3200MHz! Equipped with the usual four DIMM slots, the G1 Gaming motherboard is capable of running a maximum of 32 GB of DRAM in dual channel. At the lower right corner GIGABYTE has the various buttons for the power, reset, and CMOS switch. To the left of the onboard buttons is a handful of voltage check points. From these voltage check points you can check the VCORE, VDIMM, VRING, VIOA, VAXG, VSA, VIOD, and VRIN. Just to the north of the Voltage check points you can see the LED Debug display while the 24pin motherboard power is just to the left of there. Along the edge of the 24pin motherboard power there is a SATA power plug and an internal SuperSpeed USB 3.0 header. 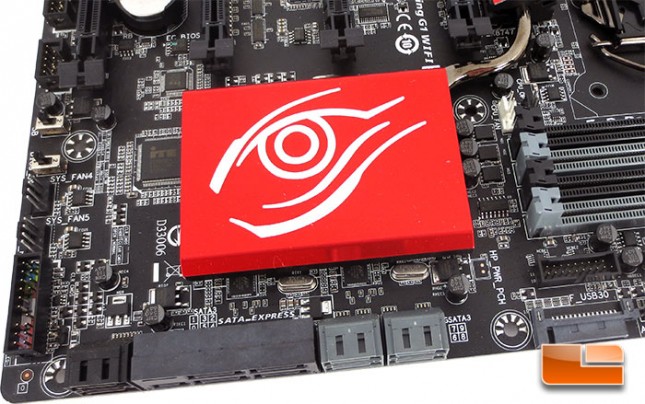 Swinging the GIGABYTE Z97X-Gaming G1 WiFi-BK around, we can see that there is a plethora of SATA ports, we’ll look at those in a moment though. Along the edge of the G1 Gaming PCB, there is the pin out for the front panel, a pair of 4pin system fan headers, BIOS Switch, Single/dual BIOS Switch, and one of three internal USB 2.0 headers. 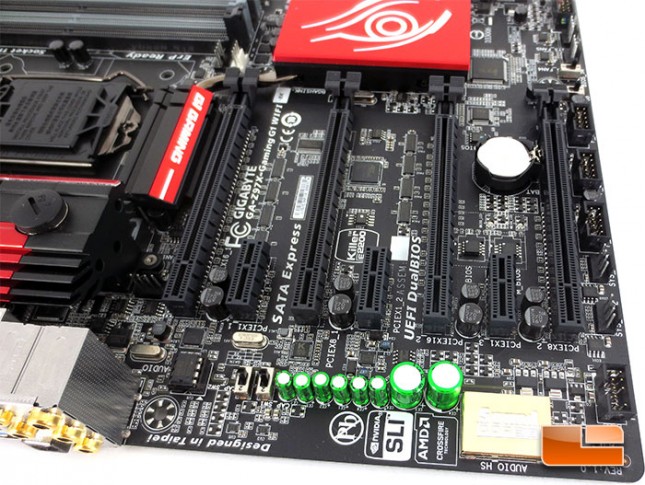 The GIGABYTE Z97X-Gaming G1 WiFi-BK has support for 4-way SLI and CrossFireX. In order to achieve this, GIGABYTE had to add a PLX chip for additional PCIe lanes. The issue with the PLX chip is the added latency on the Graphics bus that can hinder the performance of a single graphics card. From past experiences though, it’s not the kind of performance degradation that will kill a board for me. In addition to the four PCIe x16 slots, the G1 Gaming motherboard is equipped with three PCIe x1 slots. Along the edge of the board, we can see the remaining two internal USB 2.0 headers, another pair of 4pin fan headers, and the front panel audio header. Along the leading edge of the G1 Gaming motherboard, the audio components take the spotlight. The G1 motherboard from GIGABYTE breaks away from the Realtek audio codec and instead uses a Creative Sound Core 3D, this is pretty much a discrete level card integrated onto the motherboard. To the left of the Sound Core 3D chip, the GIGABYTE G1 has high end audio capacitors and onboard Gain Boost selector switches. In addition to the previously mentioned features, the G1 also has the ability to customize the quality with the optional OP-AMPs! 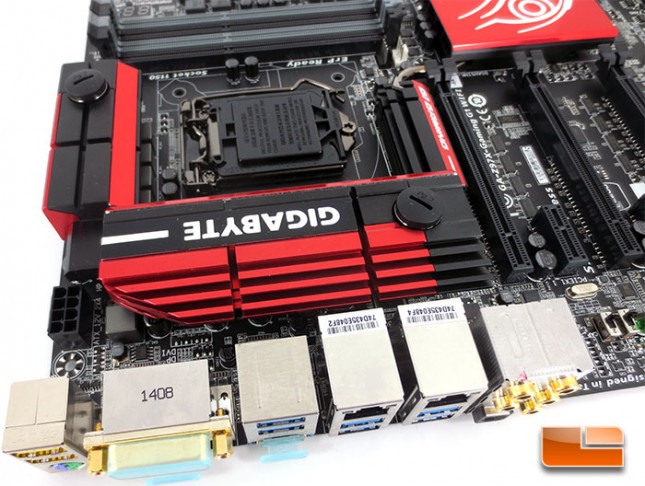 The GIGABYTE Z97X-Gaming G1 WiFi-BK gives the ability to run a custom water cooling loop through the heatsinks that are already installed onto the board. To the left of the GIGABYTE heatsinks there is a typical 8pin CPU power plug to power the chip.

The I/O panel on the GIGABYTE Z97X-Gaming G1 WiFi-BK is pretty much what I’ve come to expect on the latest GIGABYTE motherboards. There is plenty of USB ports, a pair of them are USB 2.0 while six of them are SuperSpeed USB 3.0.  If you’re planning on utilizing the Intel HD graphics on the Haswell processor, the G1 Gaming motherboard has DVI, HDMI, and DisplayPort available on it. The G1 also features a pair of Gigabit Ethernet jacks, one of the Gigabit ports is controlled by an Intel controller while the other is a Qualcomm Atheros Killer E2201 chip. One of the perks to the GIGABYTE Z97X-Gaming G1 WiFi-BK is the use of a Creative Sound Core 3D chip, that’s what drives the 5 3.5mm audio jacks as well as the optical SPDIF out seen above. 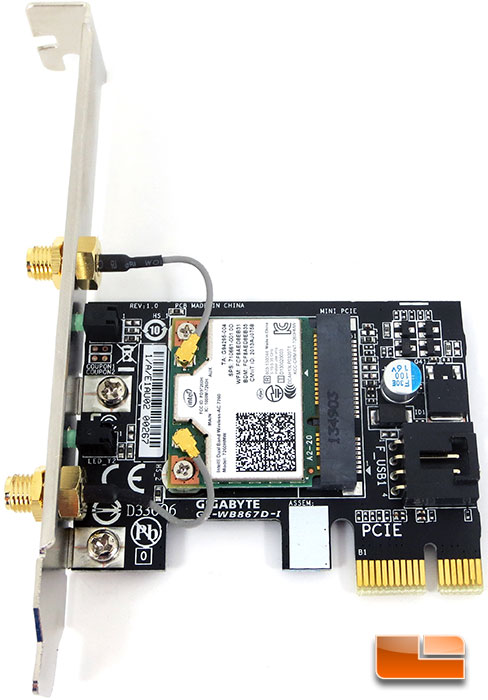 The included Wireless card is an Intel Dual Band Wireless-AC 7260 PCIe adapter. In addition to the Wireless AC, the Intel 7260 also features the latest in Bluetooth technology, Bluetooth 4.0.