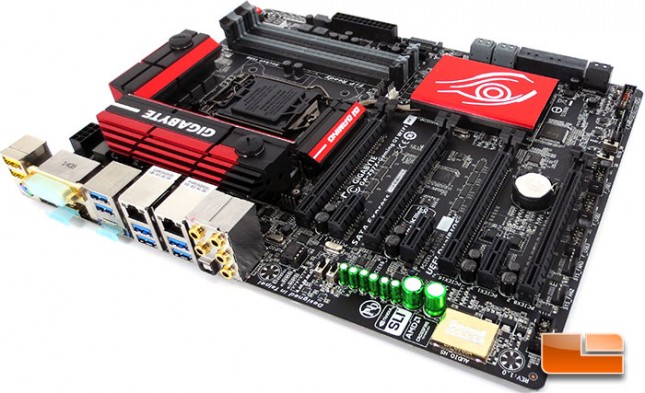 GIGABYTE is certainly one of the top motherboard manufacturers out there these days, and their G1 Series of motherboards have been running strong for a number of years now. Today I have the chance to get my hands dirty with the latest in the G1 series, the GIGABYTE Z97X-Gaming G1 WiFi-BK Intel Z97 Motherboard. The Z97X-Gaming motherboard isn’t for the budget minded individual, with a retail price of $379.99 it’s meant for the elitist that wants the best of the best and is planning on running 4-way SLI or 4-Way CrossFireX.

If you hadn’t already guessed it, the GIGABYTE Z97X-Gaming G1 WiFi-BK is built around the Intel Z97 chipset and LGA1150 socket. This combination lends itself to the latest Intel Haswell processors as well as the soon to come Broadwell processors which are rumored to come out later this year. Quality is always a concern when investing into the components that go into a computer, GIGABYTE has realized this and has stepped up to the plate and has began individually testing their top motherboards. The GIGABYTE Z97X-Gaming G1 WiFi-BK is part of the GIGABYTE Black Series that is put through rigorous testing for 168 hours (7 days).

If you’re familiar with the previous GIGABYTE G1.Killer motherboards, you know that high end audio was a key component to the product stack. GIGABYTE continued that trend on the Z97X-Gaming G1 WiFi-BK and is using the Quad Core Creative Sound Core3D audio codec. Coupling the Creative Sound Core3D with the High end audio capacitors, Gaming headphone amplifier, selectable gain boost, and the Audio Noise guard you can bet that GIGABYTE has spent quite a bit of time perfecting the sound on the G1 Gaming motherboard.

The audio components aren’t the only area of the Z97X-Gaming G1 WiFi-BK that GIGABYTE has spent time on. GIGABYTE realizes the importance of a quality NIC, so they have given us two to choose from on the G1 Gaming motherboard. One of the NIC’s is an Intel I217-V Gigabit Ethernet controller, while the other is a Qualcomm Atheros Killer E2201 Gigabit Ethernet controller. Some folks are fans of the Intel controller, some are fans of the Killer NIC’s, now you can have both! While a wired connection is always a plus, it’s not always feasible. If you’re in that predicament, a good wireless connection may be your best bet, GIGABYTE has included an Intel Wireless AC 7260 PCIe card and antenna. This card features the latest wireless protocols for 802.11 a/b/g/n/ac as well as Bluetooth 4.0.

Now that the specifications of the GIGABYTE Z97X-Gaming G1 WiFi-BK have been successfully memorized, we can take a look at the retail packaging and layout of the motherboard over the next couple of pages before we get the performance!