The AMD Ryzen processor has been out for four months now, and there have been many updates to make things run a little smoother. While many were very upset at the launch issues, we should all acknowledge that these type of issues happen whenever there is a major architecture change; we just tend to forget about them over time. The issues at launch included gaming performance, power usage and memory incompatibility. After the first big update that was to fix gaming performance, we took a look at the AMD Ryzen 1700X and checked how it performed against the Intel i7-7700k in a 14 Game Showdown. We found that Ryzen had indeed stepped up and looked to perform much better than at release in a gaming environment. 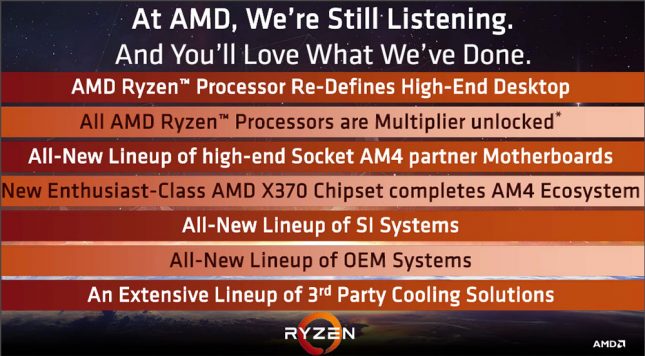 Gigabyte has been working hard with AMD to resolve the memory incompatibility issues, when we originally tested the Ryzen 1700X our test kit, HyperX Predator 3200MHz, was only able to run at 2933MHz with manual settings. Gigabyte Aorus says they have resolved the memory issues, so we are going to give it another shot and take a closer look at the Gigabyte Aorus AX370-Gaming 5 motherboard which can be purchased online for $189.99 with free shipping. 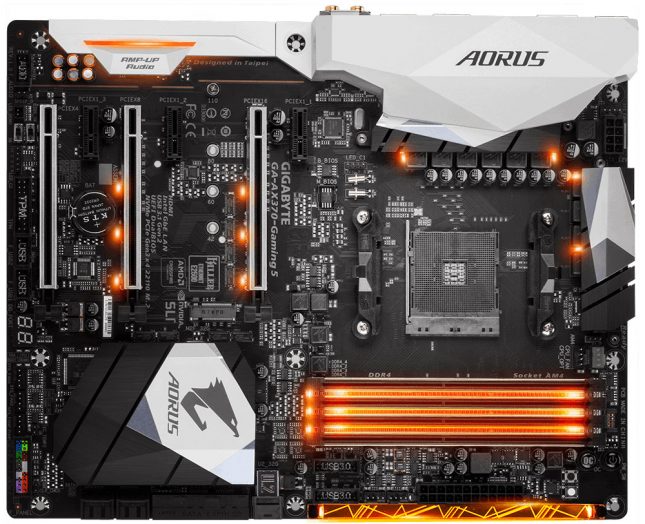 The Gigabyte Aorus AX370-Gaming 5 motherboard includes all the features you demand on a modern motherboard. If storage options are your main focus, the AX370-Gaming 5 includes support for up to six SATA 6GB/s drives (which includes dual SATA Express ports), a single M.2 or U.2 slots, USB 3.1 Gen 1 and USB 3.1 Gen 2. Networking they have you covered as well, by implementing an Intel GbE NIC and a Killer E2500 GbE NIC. Memory support is provided by four DDR4 slots, allowing for up to 3200MHz memory in both ECC and non-ECC modules. Audio is supported by the dual Realtek ALC1220 7.1 audio codecs with support for Sound Blaster X-Fi MB5. Finally, the all important video options, both Quad-GPU and 3-Way CrossFire solutions are supported, as well as Quad-GPU and 2-Way SLI.

The Aorus brand is Gigabyte’s premier gaming brand, so for the packaging, they have a pretty nice job at making sure everything is presented very well. The outside of the box, presents the user with the high level specifications, model and features. As you would expect, the back of the box is where you find the bulk of the information. Opening the box we find the motherboard has been placed in a form fitting cardboard box, while wrapped in an anti-static bag. The packaging of the motherboard is somewhere between the typical packaging of lower end motherboards, and the high end motherboards; it does provide more than enough protection to get the motherboard to its destination safely. Below the motherboard tray are the accessories.

Laying out the accessories we find many of the very common accessories, and several additional ones. There is the typical user manual, driver DVD, user guide, and a sheet of cable tags. There is also the standard rear I/O shield, two large Aorus branded velcro straps, four SATA cables, a solid SLI bridge, Gigabyte’s quick connector, two thermal leads and a RGB LED strip extension cable.

Let’s move on to taking a closer look at the Aorus AX370-Gaming 5 motherboard.