We have been reading and seeing a lot of performance and testing done on the latest AMD CPU, the Ryzen 7 1700X. After it was released, people were quick to find that there was a significant difference in performance between running the system in a Balanced power plan vs High Performance power plan; the trade off is the amount of power they consume and the High Performance plan keeping the system in a full speed state. Recently AMD released the fix to the Windows plan, allowing users to run the AMD Ryzen process in a Balanced power mode without sacrificing performance.

Legit Reviews took a quick look at the new AMD Ryzen Balanced plan a couple weeks ago, and we did see a performance increase in a couple of games. We decided to expand the testing to fourteen games and 3DMark Fire Strike Extreme putting the AMD Ryzen 7 1700X against the Intel Core i7-7700k.

The AMD Ryzen is based on the new “Zen” microarchitecture design meant to be used for high performance gaming, while still supporting content creation. AMD has plans to stick with the Zen design for several years, as they are already discussing the next generation Zen 2 and Zen 3 products. The initial release of the Ryzen processors features the Ryzen 7 1700, Ryzen 7 1700X, and Ryzen 7 1800X. All of these are nearly identical with a few differences. Each of them has 8 cores, and supports up to 16 threads. The biggest difference comes in the clock speeds with the Ryzen 7 1700 having a base clock of 3.0GHz with a 3.7GHz Boost, Ryzen 7 1700X has 3.4GHz with a 3.8GHz Boost, and Ryzen 7 1800X features 3.6MHz with a 4.0GHz Boost. The Ryzen 7 1700 also includes the AMD Wraith Spire cooler, while the others do not as AMD assumes people would prefer to use third party CPU coolers or liquid coolers. The final difference is the inclusion of AMD XFR (Extended Frequency Range) on the -X processor models. XFR allows the CPU to boost the processor dynamically in 25MHz steps getting the highest possible clock speed for a specific task. 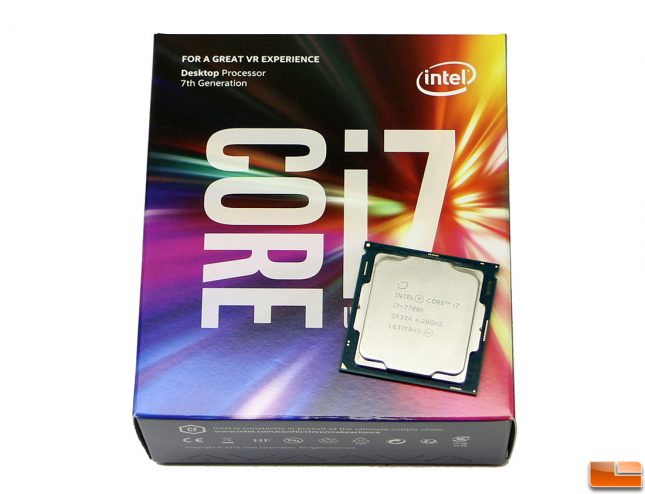 The Intel Core i7-7700k was the first flagship processor from Intel based on their Kaby Lake architecture. The initial release of the Kaby Lake i7 processors, Intel released three models for different purposes, one for mobile, power users, and then an enthusiast class. The Core i7-7700k is the enthusiast class and has the highest clock speeds and overclocking capabilities. The Core i7 processor features 4 cores, with 8 threads and has a base clock speed of 4.2GHz with a 4.5GHz.

Let’s take a quick look at the two new test systems we will use in this round of testing.