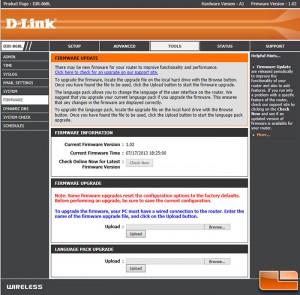 The D-Link DIR-868L uses Wi-Fi chips from Broadcom; the new router is a true dual band router with support for the three stream setup for the 802.1n and 802.11ac Wi-Fi standards. This means it offers up to 450Mbps on the 2.4GHz frequency. On the 5GHz band it offers up to 450Mbps when used with Wireless-N clients, and up to 1.3Gbps when used with 802.11ac clients. The D-Link DIR-868L supports all existing Wi-Fi clients on the market, regardless of their Wi-Fi standards.

Taking a peek inside, we find that the D-Link DIR-868L is powered by a second-generation Broadcom chip and now has SmartBeam technology which is designed to enhance the routers Wi-Fi performance and coverage, but the downside to this new router (when it was first released) is that it lacked the ability to work as a media bridge or as an access point only. This means that unlike other high-end routers on the market, the DIR-868L cannot be used as an 802.11ac client or bridge to add Ethernet ready devices to a Wi-Fi network or as a switch with built in access point to work with an existing network. [Note: The lack of the ability to operate in a bridged mode has since been addressed in D-Links v1.02 firmware]. 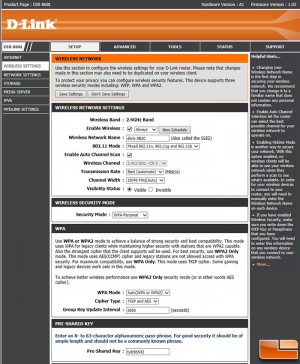 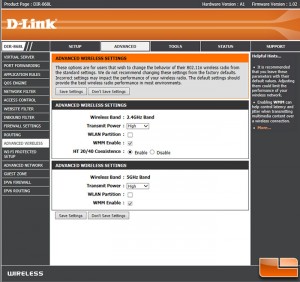 The DIR-868L supports all common features found in high end routers including guest networking with two networks one for each band, IPv6, port forwarding, QoS, firewall, and etc. Also the router offers features that have been collectively available in other D-Link routers, including a well-organized Web interface, an extensive Web-filtering engine, and support for a storage device for data sharing and media streaming needs via a connected USB external hard drive. The DIR-868Ls USB port can be used with any external hard drive which is formatted in either FAT32 or NTFS. The user would be able to easily share the hard drive with everybody in the network or securely share its hard drive content via user accounts. The DIR-868L is also designed to stream digital content stored on the drive like a network media streamers.

The D-Link DIR-868L allows users to manage their home network via the internet using the MyDlink portal. The user will need to create a free account unless the user already has an existing one then add the router to the account by entering their username and password in the MyDlink settings section of the Web interface setup. Once that is done the user can view the status of the router as well as manage some of its settings.

D-Link calls the DIR-868L a cloud-based router because of the MyDlink services. The cloud based feature can also be accessed via a mobile app, called D-Link Light which is available for both iOS and Android devices. Unfortunately, using the router via the web interface only makes it a bit limited since it doesnt offer the same amount of access in to the DIR-868Ls normal interface. An alternative for the more advanced user might be to set the router up with a free DynDSN service to access its Web interface on the go without the need of the MyDlink portal.

Now lets take a look at how the D-Link DIR 868L Wireless Router works as far as its WiFi speeds. First well test the router with legacy 802.11n devices, and then well take a look at the super-speedy 802.11ac performance.