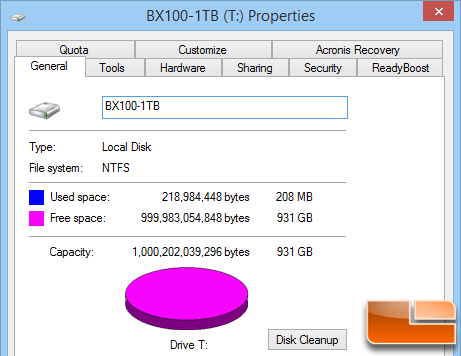 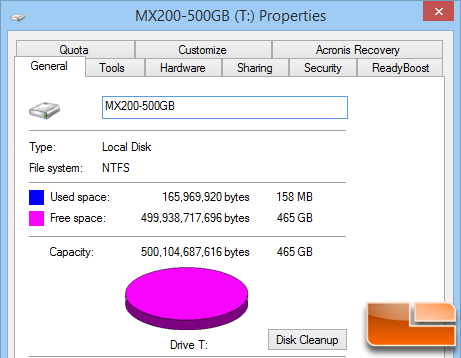 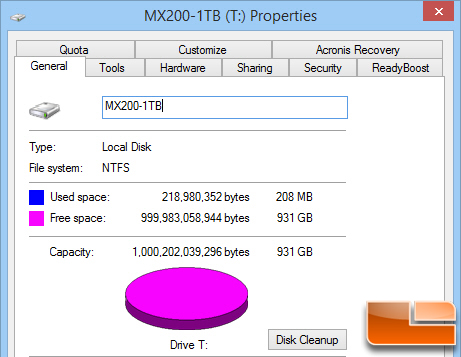 Power usage has come under more scrutiny lately with more and more computing being done on battery powered devices and while SSDs in general are lighter on power requirements than that of spinning platter drives, some are definitely better than others. For the MX200 drives, we saw idle power draw at 0.195W and a max draw of 0.782W for the 500GB drive and 0.829W for the 1TB drive. The BX100 fares a little better on the max draw at 0.779W and idle is much better at 0.073W. These are all pretty good numbers although above some of the Samsung drives which are incredibly power efficient. Don’t forget that the MX200 also supports DevSleep which can really save a lot of power if you leave your laptop to sleep for long periods of time.

Crucial has done a good job of offering two series of drives that have different enough performance and features so as not to cannibalize their own sales. The BX100 is a no frills, budget friendly drive that offers better performance on the larger capacity drives and retails for $68.15 Shipped for the 120GB drive and for the 1TB drive we tested. It comes with a 7mm to 9.5mm spacer and that’s about it. The 1TB drive price per usable GB is a paltry $0.38. That’s an amazing price for a 1TB drive. If that’s a little rich for your blood, a coupleof the 120GB drives in a RAID 0 setup will set you back less than $140 and will deliver incredible performance. Alone, the read rates hit 535MB/s and writes range from 185MB/s to 450MB/s so a RAID set up isn’t required.

The MX200 is a little better on the performance side of things but mostly in the lower capacities thanks to the Dynamic Write Acceleration technology to boost performance. It’s more of a mainstream user target and offers multiple form factors of 2.5″, M.2, and mSATA. Having a variety of formats is becoming a trend for SSD makers. It packs more features than the BX100 with hardware encryption, power loss protection, adaptive thermal protection, and their proprietary Redundant Array of Independent NAND (RAIN) performance technology. In addition, a copy of Acronis True Image HD software is provided. Performance is all around solid with reads are rated at 555MB/s and writes at 500MB/s and that’s pretty much what we saw in the testing. For additional features and performance, the price is greater than that of the BX100 but that’s expected. All MX200 form factors of the 250GB drive retails for $133.99 shipped and the 1TB drive we tested costs $445.99 shipped. That comes out to $0.45 per usable GB which, while more than the BX100, still extremely affordable for such a well performing drive. 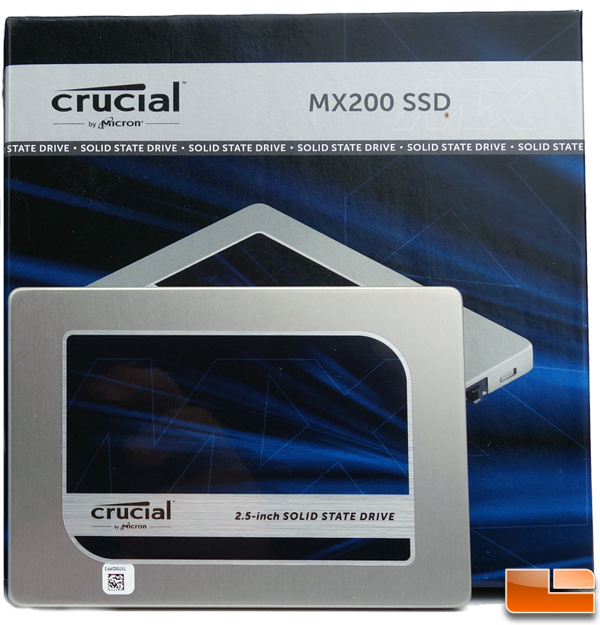 The only real issue we saw in testing was in the consistency tests where neither series fared particularly well, especially in the recovery phase. Although this is a worst case scenario, it would behoove owners to keep the drives 80% or less filled to maintain long term performance. The Storage Executive utility is available to look after the drive along with the normal TRIM and garbage collection operations so it shouldn’t be a large concern. Given the pricing and performance of the drives, we expect that it will draw quite a bit of consumer attention and likely to escalate the growing price war between drive makers that may ultimately weed out the small players.

Legit Bottom Line: The BX100 carries an amazing price and solid performance for those looking for an entry level drive and the MX200 adds on a greater feature set a bit more performance and a price tag that can’t be ignored.