Crucial and Micron have been hard and heavy in the SSD arena and since they are also a big player in the semiconductor business they have a good foundation for the storage media platform. We had a look at the MX100 drive back in June of ’14 and we found that the performance was very good and the pricing was very attractive. They’ve now released the follow up drive in the MX200 series along with a more budget friendly BX100 series. They sent us over some samples to evaluate and see what improvements they’ve made. They are really targeting to cover both entry level and mainstream consumers with these drives and as a spoiler we’ll say that they did a pretty good job. 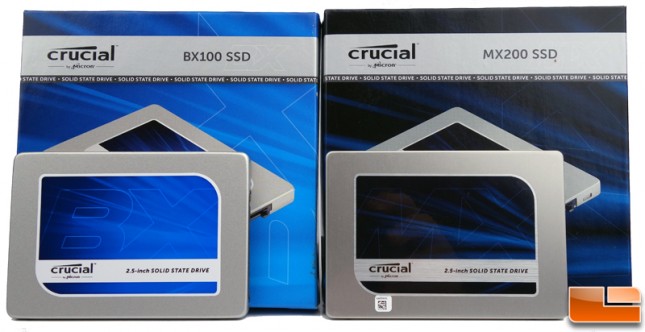 The BX100 is powered by a Silicon Motion SM2246EN controller which is one we haven’t had on our test bench before so it will be interesting to see how it performs. The MX200 gets the same Marvell 88SS9189 controller we saw on the MX100 but likely with firmware updates as there are some new features. The BX100 only comes in the 2.5″ form factor with capacities of 120GB, 250GB, 500GB, and 1TB. It’s more of a budget oriented drive with less features than the MX200 though performance specifications are close to the MX200 in reads at 535MB/s but writes range from 185MB/s to 450MB/s depending on the drive size.

The MX200 comes in three flavors – 2.5″, mSATA, and M.2. All come is 250GB and 500GB capacities with the 2.5″ adding 1TB as well. The MX200 drives have a new feature for the smaller capacity drives called Dynamic Write Acceleration which uses an “adaptable pool of high speed” SLC NAND to help keep performance humming along although we won’t see it on either of the two MX200 drives we are testing as they are large enough to provide an amply array of NAND modules. The MX200 also features AES 256-bit and TCG Opal 2.0 hardware encryption capabilities, DevSleep support, and adaptive thermal protection to mitigate excessive heat that might otherwise damage the drive. All MX200 and BX100 drives carry the same 3-year warranty and an estimated 1.5 million hours MTTF.

Let’s take a look at the inside of the Crucial MX200 and BX100 series drives.