I originally picked up the first Cosmos 1000 case due to its slick design, features such as air filters, tons of room for internal storage, and silence. Lets take a look and see how Cooler Master designed the Cosmos SE with these same factors in mind, starting with the exterior of the case.

Pulling all of the packing materials off, we can definitely see the Cosmos look, and its a good one! 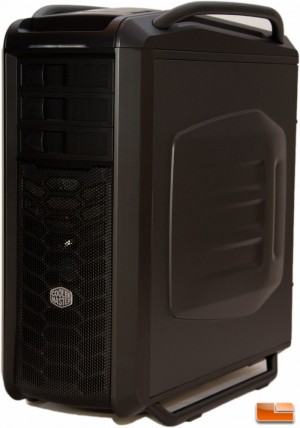 One more clean look at the Cosmos SE front.

Up top are the 5.25 bays, three in total. The 5.25 bays have a cover thats super easy to remove. You simply pop it off by putting your finger under the latch on the cover and pull. It will unlock and pull out. If you take note, you will see that the bottom 5.25 bay is covered by a fan. The cover that is in place here will actually restrict airflow from this fan a bit. This bottom bay can be used, but at the expense of removing HDD trays and removing the top fan.

Below the 5.25 bays is a mesh grille that can be easily removed. Simply tug on the bottom of this grille and pull forward. I have tucked the front cover under the case slightly in the below picture. Pulling this cover off will expose two 120mm intake fans. Again, these fans will have a blue LED on them when fired up and can be turned on and off via the button next to the reset button.

Looking closely at the mesh grille, you will actually notice that it is actually a filter to keep all of the nastiness out of your case. 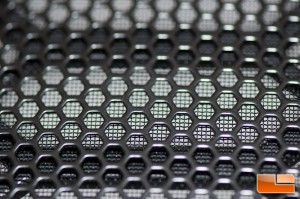 At the very bottom of the face is an easy access to two 3.5 bays. These have tool-less trays and simply slide out by pinching the ends. Look closely at the below picture, and you will notice some L-shaped hooks hanging on the bottom of the tray. This is how Cooler Master made these trays accept a 2.5 drive, which is pretty neat. Seeing these is where you begin to understand how Cooler Master says you can install up to 18 SSDs into this baby! This entire cage can be removed should you want to install a 360mm radiator up front. 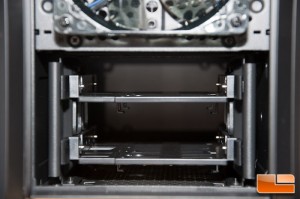 Alright, moving over to the left side of the Cosmos SE, Cooler Master has covered the Plexiglas window with a protective plastic on both sides. 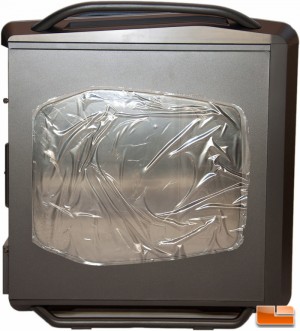 Ripping the plastic off we catch a glimpse of the inside. There isnt really much to see on this side of the case without opening it up, but the window looks like it definitely will showcase your hardware quite nice. 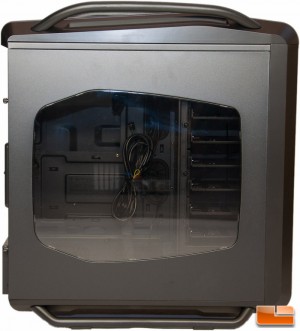 Spinning to the rear of the case and starting up top is where a 120mm exhaust fan is located. This fan does not light up like the front fans do, so if youre looking for more of a colorful punch inside your case, you will have to supply your own LED lit fans.

Below the fans are a few holes for water cooling hoses, which have grommets placed nicely in the holes. Stepping down from there are the seven expansion slots.

Finally, the PSU location is on the bottom of the Cosmos SE, which is actually bumped out a little bit.

One last thing to take note of on the rear are the four thumb screws that hold on the side panels. Obviously these make getting into your case that much easier. There is one additional screw on the very top, which is going to be used to remove the top panel that I will get into in a moment.

Spinning over to the right hand side of the case we find a nice design on the side panel. This design is actually bumped out a good amount and will help you with routing wires behind the motherboard tray. 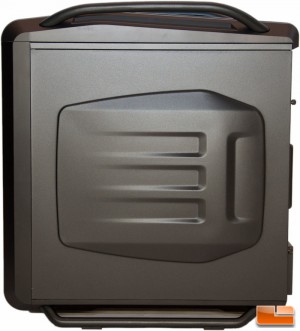 Heres one more look showing the right side panel bumped out.

Jumping to the top of the case is where youll find the I/O panel and a mesh grille. The handles up top here will also make moving the case around very easy, but they will also make your case look stylish. 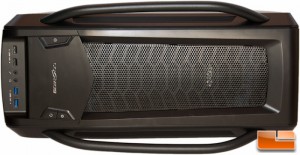 On the I/O panel, working left to right, are 2x USB 2.0 ports, mic in, audio out, and 2x USB 3.0 ports. The USB 3.0 ports are not backwards compatible and will not plug into a USB 2.0 header. There is also a power, reset, and the LED on/off button in this section, too. 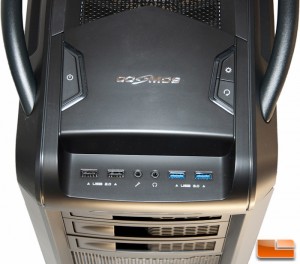 Removing the mesh grille on the top of the case isnt as easy as the front one is, but its still easy none-the-less. A thumb screw holds it in on the rear and then you simply pull back and up. Behind the mesh grille is a single 140mm exhaust fan, that’s actually inside the case, and room for another 140mm fan. This grille is also filtered like the front, which is something you dont find on every case. 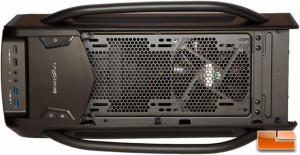 Last but not least, the bottom. The bottom has the same style handles that the top has, but these actually have four rubber feet screwed into them.

There are also two filters on the bottom. I swear that you can never have enough filters on computer cases since they do a wonderful job if kept clean. The one on the rear slides to the rear, and the one on the front slides to the front. Unfortunately to remove the filter on the front, you have to pull the front mesh grille out. Its not something that will add an extra 10 minutes to your cleaning routine, but it is an inconvenience.

In all of its glory, I am actually pretty happy with the exterior design of this case. Its simple enough and has plenty of nice curves to go along with it.

Finally, being an owner of the Cosmos 1000, I wanted to include a couple shots comparing the two on the outside. You will have to take note that I modified my Cosmos 1000 to accept a 360mm radiator and pulled off the door to install a fan controller. 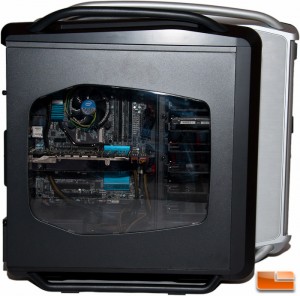 and finally one more: 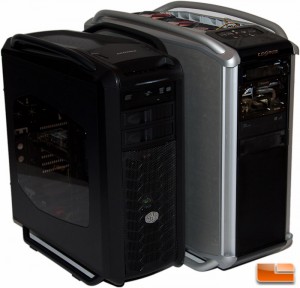 Alright, that does it for the exterior impressions, so lets rip these side panels off and take a look at what the interior has to offer