As you can tell over the past year building your own gaming notebook has become an easier task to do.  No longer does the keyboard have to be removed as everything can be accessed from the bottom of the laptop.  With no wires to run and all the hardware plugging right in the process of building your own notebook takes well under 15 minutes to complete.

One of the nicest features of the Clevo M57U has to be the upgradeability of the notebook itself. The Clevo M57U supports the latest Yonah processors ranging from the T2300 all the way up to the just released T2700 when it comes to current dual-core processors. It also supports Intel Core Solo T1300 and T1400 for those looking to build a system on a tight budget. In terms of future processors this notebook chassis will be able to run Memrom processors that will be known as the Intel Core 2 Duo Processor T5600/T7200/T7400/T7600 with a simple BIOS flash. The Intel T1300 (1.66GHz single core processor) can be found for $221, which is a little cheaper than the T2300 (1.66GHz dual-core processor) that costs $246.

While the building of a notebook has gotten easier over the past two years the hard part is still finding a vendor/reseller that will sell you an empty whitebook. The Clevo M57U and Sager 5760 whitebook notebook can be found pre-configured from a number of online resellers starting from roughly $1900.  The only notebook seller we could find online that carries the whitebook is RJTech, with prices starting at $1,644.00 for the barebone system.

The only down side to the notebook is finding someone that wants to sell just the whitebook without putting in their own components.  I’ve spoken to resellers who can get the chassis for under $1500, but they are unwilling to sell it in the barebones form. I find it funny that computer shops will not sell these chassis to the public unless they build it for you.  Since nearly all computer shops can order Clevo products from their distributer I highly advise calling your local computer store and asking them to order one in for you.  Once again we are hitting the wall we hit two summers ago when we built our first gaming laptop, retailers are not pushing or selling the whitebooks that are available on the market.

In closing the Clevo/Sager notebook that we looked at today can play video games just like any desktop computer can.  The combination of the Intel Core Duo processor and the NVIDIA GeForce 7900GTX prove to be a lovely combination to get your frag on with. Actually when I was at the Intel Summer Championships during this years WSVG tour I was amazed to see the tournament computers were actually laptops! Here is a picture of Fatal1ty warming up to play in the Quake 4 tournament at the WSVG Intel Summer Championships. 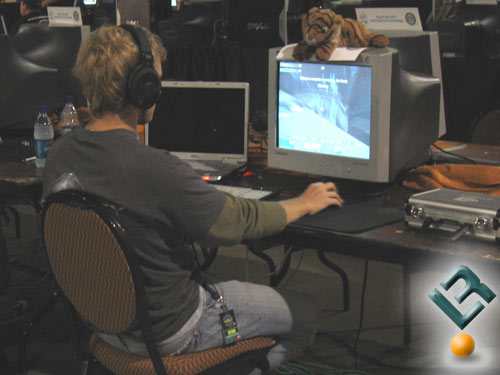 With all the professional gamers playing for the $51,000 first place Quake 4 check on today’s latest laptops it just shows how far they have come. I had the pleasure of playing Quake 4 against the guys from Check Six and 4Kings on these Intel Core Duo and GeForce 7900GTX notebooks and nearly forgot I was playing on a laptop the performance was so good.  Finally notebooks have gotten to the point to where you can play games on them!