Looking at the Clevo M57U notebook chassis you see a sleek looking notebook, which is hard to create in the 17″ notebook sizes.  Below are some pictures that show all the sides of the notebook and list the important features found on the outside. 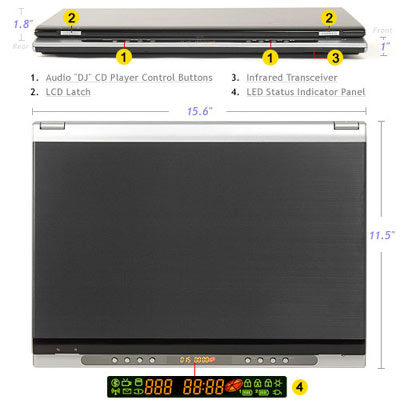 The Audio “DJ” buttons and LCD display at the bottom of the chassis is a great feature. The screen gives you some great information like the time displayed in military time. The display also shows battery charge, hard drive activity, and various other features. It also doubles as a CD player as you can have it run without having the laptop turned on. 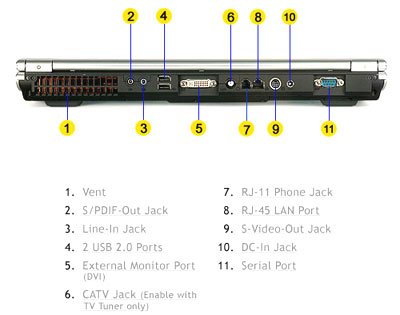 You won’t see a VGA port on the notebook as this bad boy uses an DVI output to display serious HD images. Also included are the  S/PDIF-Out jack, RJ-11 phone jack, RJ45 LAN jack, 7-pin S-Video-Out jack, Serial Port, Headphone-out jack, Microphone-In jack, 7-in-1 Card Reader and a Mini-IEEE 1394 port. Also included is an TV Antenna jack found in the back, but you will need to have a TV Tuner installed for it to work. 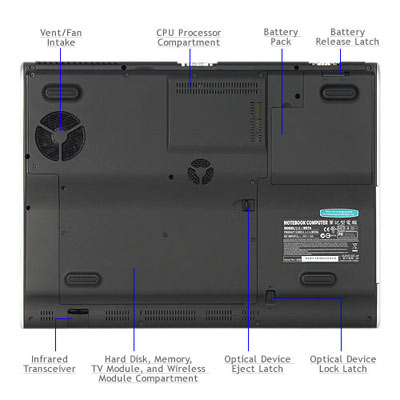 The bottom of the notebook shows that the notebook has two cooling fans that shouldn’t be blocked during use. It also features firm rubber pads to keep from scraching the surfaces the notebook is used on. 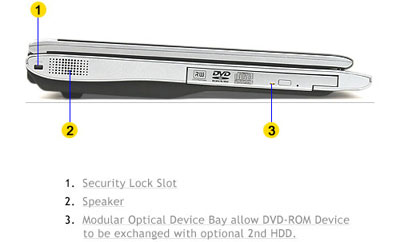 The chassis does offer a Kensigton lock on the rear of the left side, which is needed to secrure your laptop at LAN parties, your dorm, or at work. 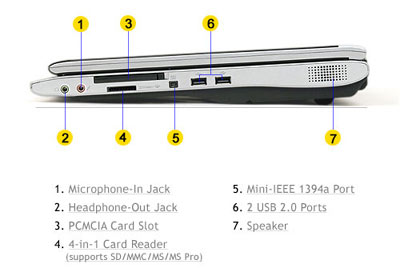 The PCMCIA Card slot (ExpressCard Slot) accepts both ExpressCard/34 and ExpressCard/54 formats. The picture above also shows the two poorly placed USB ports on the right side of the laptop. This is right where a mouse would go if one is used with the notebook and seems to be badly placed for a gaming platform. Now that we know what the outside looks like let’s take a look at the inside while I build my laptop.