One of the quickest ways to tell the quality of an LCD is to look at the screen with a jet-black image on it and if the screen is jet-black when it’s turned on displaying a 100% black image, you’ve really got a really great LCD display. In the case of the Clevo M57U I compared it to the ASUS Z71V, which we used in our previous articles. The difference between the ASUS Z71V and the Clevo M57U turned out to be clear as day.

In the above picture the ASUS Z71V is on the right while the Clevo M57U is on the left. The ASUS Z71V features an 15.4″ WSXGA+ (1680X1050) matte screen while the Clevo  M57U that I tested uses an 17″ WUXGA 1920×1200 super glossy screen. We did notice when increasing the viewing angle that the image quality on the ASUS Z71V seemed to get worse. Take a look at what happened when out camera was mounted on a tripod 26″ above the base of the notebooks. 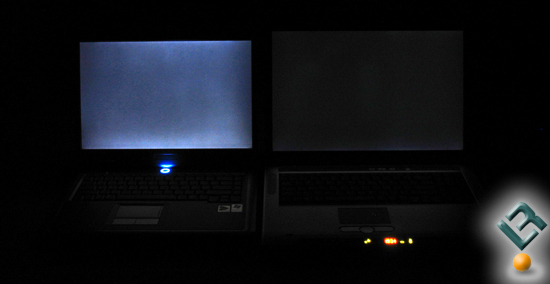 Taking a picture at a higher angle above both screens it is obvious that Clevo is using a much better screen on the M57U than what ASUS used on the Z71V.  The Clevo LCD comes close to maintaing a perfectly black test screen, signalling a great contrast ratio. After using the Clevo M57U after the ASUS Z71V the diffence is striking.

I also have the brand new ASUS Z62J Verfied By Intel notebook, which is part of Intel’s common building block program. If you thought the difference between the Clevo M57U and the ASUS Z71V was big you haven’t seen anything yet!  Take a look at the image below!

With the Clevo sitting on the left and the ASUS Z62J on the right it’s clear which LCD display can better reproduce black colors. Now that we know the Clevo M57U’s LCD screen is decent let’s take a look at the LCD’s available.

Types of Screens Available on The Clevo M57U:

WUXGA: Stands for Widescreen Ultra eXtended Graphics Array and is a display resolution of 1920×1200 pixels with a 16:10 screen aspect ratio. It is a wide version of UXGA, and is appropriate for viewing North American HDTV content (ATSC), which uses a 1920×1080 image at a 16:9 ratio

WSXGA+: stands for Widescreen Super eXtended Graphics Array and is a computer display standard. A WSXGA+ display is commonly used on widescreen 15.4 inch laptop LCD screens with a resolution of 1680×1050 pixels.

WXGA: stands for Wide XGA, which is a wide screen display standard that supports a resolution of 1280 to 1366 horizontal pixels by 720 to 800 vertical pixels. WXGA is commonly used by LCD TV sets and computer monitors for widescreen presentation. 720p, the HDTV video mode, is a related standard, measuring 1280×720 pixels. 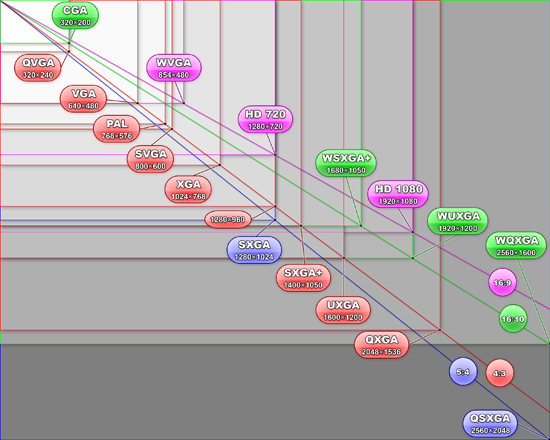 Right now the two most readily available LCD displays are the WSXGA+ and the WUXGA.  Most resellers are charging an extra $15-$50 for the WUXGA display and I feel that it would be worth it in the long run based off the fact that WUXGA is meets the North American HDTV content (ATSC) standards.  It seems more future proof and for an extra ~$15 it seems like the smart purchase.