The Clevo M57U came packed with the NVIDIA GeForce 7900GTX (G71) video card with 256MB of GDDR3 memory. With a clock frequency of 500MHz on the core and 600MHz on the memory we found it more than able to play the latest game titles with the eye candy enabled.  I was able to play through the Laura Croft Tomb Raider: Legends at 1280×960 with 4xAA and noticed only a couple of NVIDIA driver issues (Screen shot) that had nothing to do with the notebook itself. I was able to play Far Cry, F.E.A.R. Quake 4, DOOM 3, Counter-Strike: Source and a number of other recent titles at wide screen reslutions with no major issues.  Wanting to improve gaming performance to remove the random stutters under intense settings I overclocked the video card in the test system. As always overclocking is not advised by many hardware companies, but since end users like to get the most performance for their dollar it will be done. We used a program called Coolbits Version 2.0 to aid our overclocking journey.

After installing Coolbits we are now able to overclock the GeForce 7900GTX video card found in the Clevo M57U notebook. Before we overclock it let’s take a look at the stock settings and see what performance numbers we get. 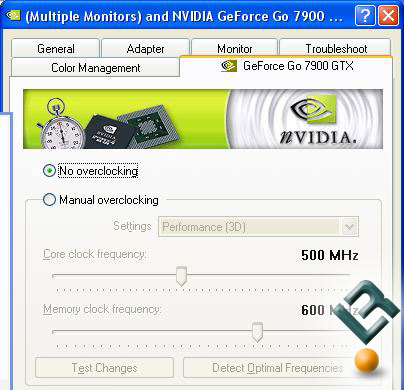 A quick look at the video card settings show that the clock settings are correct 500MHz/600MHz. We then ran Futuremark’s 3DMark06 to see how the Clevo M57U whitebook notebook does in “all default” form. 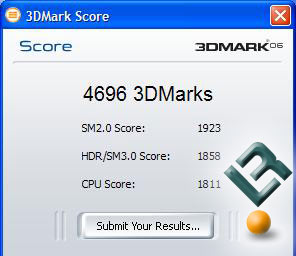 When 3DMark06 stopped running it showed that we were able to score an impressive 4696 3DMarks. Not a bad number at all!  Now let’s overclock this baby! 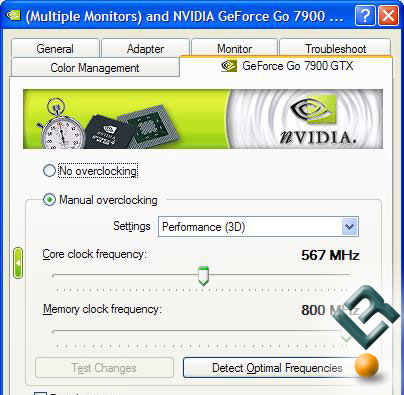 By running “Detect Optimal Frequencies” it came back showing that 560MHz/720MHz was our optimal setting, but manual overclocking showed that the system would run up to 567MHz/800MHz before artifacts would take place. Actually 800MHz on the memory clock frequency was the highest we could go in the driver, so it might have even more than this. Now with our system overclocked 67MHz on the core and 200MHz on the memory I ran 3DMark06 over again. 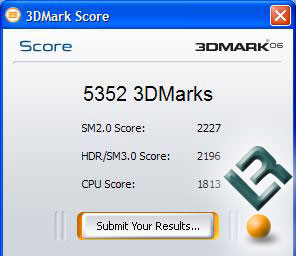 This time around I got 5352 3DMarks, which is an increase of 656 3Dmarks or a 14% increase when compared to our stock settings. Very impressive results from a notebook consuming ~80W of total system power when running these overclocked benchmarks.