Dual-Core Gaming In 2006 Is Looking Good

It’s been nearly one year since Legit Reviews has written an article on building your own custom whitebox gaming notebook and boy how times have changed.  In early 2004 I published my first Do-It-Yourself article (Part 1, Part 2, Part 3) on building a gaming notebook and to make our notebook game worthy we had to modify desktop drivers to work on a laptop and overclock the graphics card to get enough power to play games at decent frame rates.  The Intel Pentium M 1.7GHz (Banias) processor and ATI Radeon 9600Pro 64MB video card provided the power to run games, but everyone wanted more. Assembly required the removal of plastic bezels, the keyboard and the back cover of the notebook, leaving a mess of screws to deal with. On top of all this no one carried whitebooks as their future was still uncertain in 2004.

In the summer of 2005 I published an article on how to build an Intel Sonoma based notebook (How To Build A Sonoma Notebook).  This notebook featured an Intel Pentium M Dothan processor paired with the mainstream GeForce 6600 PCI Express graphics card for performance on a budget. The ASUS Z71V used in the article had no plastic bezels that needed to be removed, but the keyboard and back access panels had to be removed for hardware installation.  Finding the ASUS Z71V in the channel was fairly easy and before you knew it DIY notebook articles were popping up all over the web and in magazines. It looks liked whitebook notebooks were something that was going to survive the market.

It’s now officially the summer of 2006 and it’s time to do publish another article on how to build your own gaming notebook.  The changes from 2005 to 2006 were significant when it comes to notebooks. Intel started shipping dual-core processors (Yonah) for their Napa based platforms (i945PM/GM) and we finally saw ATI and NVIDIA putting high end graphics in decently sized notebooks.  Our previous two articles we used 15.4″ widescreen notebooks, but this year I am moving up to a 17″ screen with a native resolution of 1920×1200. With an upgradeable NVIDIA GeForce 7900GTX 256MB video card powering the 17.0″ WUXGA Wide Screen display at 1920×1200 the notebook I picked out seems worthy enough to replace the one I picked out last year. Without further ado let’s meet this year’s DIY gaming notebook, the Clevo M57U! 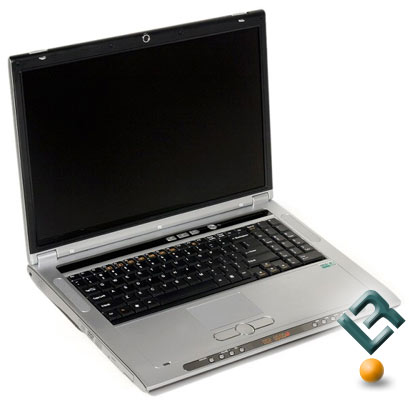 Weighing in at 8.3lbs the Clevo M57U notebook is considered a desktop replacement and after carrying around the Clevo M57U at LANWAR 2006 and the Summer CPL 2006 Championships this week in Dallas, Texas the notebook did get a little too heavy on the shoulder for daily use. In order to get the gaming performance I craved the 17″ size and weight is something I can’t avoid. To get good graphics nearly all the true gaming notebooks are 17″ or larger, so at least this isn’t a 19″ notebook!

The Clevo M57U provides what I found to be the best combination of performance and mobility of any 17″ whitebook notebook on the market. It features the Nvidia GeForce Go 7900 GTX, the world?s fastest mobile graphics technology as well as Intel?s Core Duo Technology which allows for outstanding battery endurance in a sleek, compact design. It also turns out that Clevo makes a variant of the M57U for Sager in the NP5760 Series. If you are a serious gamer that is always on-the-go read on and see if this notebook is right for you!