Since this is notebook is designed for gamers on-the-go let’s take a look at some gaming bechmarks! Since we still have the gaming notebook we built last year let’s see how our just built Clevo M57U running the GeForce Go 7900GTX stacks up againt our ASUS Z71V with the GeForce Go 6600. 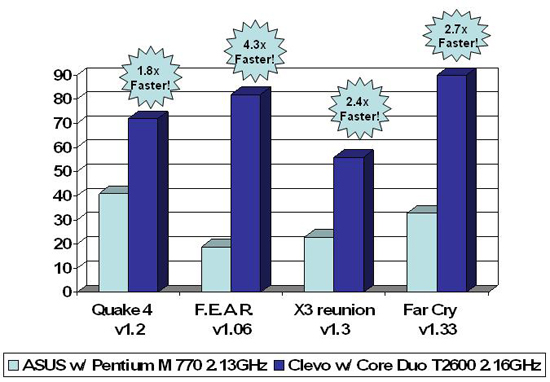 We updated our games to make sure we had the latest patches for dual-core processor support and benchmarked our two gaming notebooks.  With both notebooks running the same settings and resolutions on all of the games the performance differences were visable during testing.  Looking at the data from the benchmarks it s clear that the Clevo M57U with the dual-core processor and faster GPU takes the performance win.

With everyone worried about rising energy costs the next area of concern was power consumption.  With the notebook running a bigger screen, a slightly faster dual-core processor, a bigger hard drive and the fastest mobile graphics card on the market I was sure this notebook would guzzle power like no other.  Using a Seasonic PowerAngel Power Meter we tested the total system power consumption and graphed the results below. 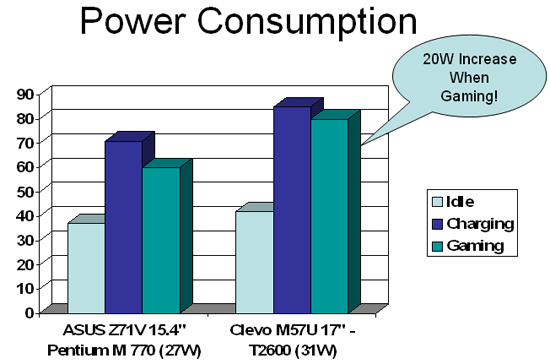 After taking power reading I learned that a notebook consumes the most energy when charging the battery (even when the system is at idle).  At idle on the Windows desktop the notebooks differ by only 5W and during gaming the difference is exactly 20W.  The larger screen, dual-core Intel processor, and the faster video card only added 20W to our system! An example of why there is only a 20W difference can be seen when looking at the processors. The single core Intel Pentium M 770 has a Thermal Design Power (TDP) of 27W, which is slightly lower than the 31W rating on the dual-core T2600 processor. It looks like we more than doubled our gaming performance and only slightly increased power consumption! 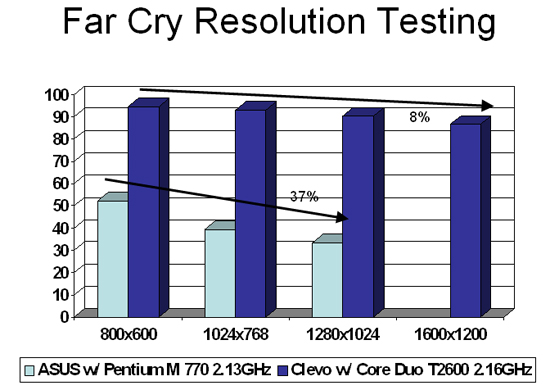